The digitisation of processes and the use of collaborative tools combined with an appropriate technological infrastructure are helping to improve the resilience of companies in situations such as the COVID-19 pandemic. The application of the BIM methodology is one of the key elements, especially in infrastructure projects where it is not yet well established.

EXPERIENCE IN LINEAR INFRASTRUCTURE. Ineco has developed multiple projects using the BIM methodology in road, rail and metro infrastructure. In the picture, a model of a light metro station.

In companies, digitisation has been aimed at increasing productivity, which is also the goal of BIM implementation in Spain. However, the recent COVID-19 pandemic has shifted the focus to resilience and maintaining productivity in the face of adverse situations, in short, maintaining the business. This objective is clearly reflected in the pillars of the BIM methodology, which focuses on digital information management –with the reduction of paper-based processes, common data sources and process automation– and collaboration, i.e., the use of collaborative tools, digital exchanges, synchronised access and the use of cloud storage. The new scenarios generated by this pandemic, such as the promotion of remote work (teleworking), the reduction of contact between workers through the establishment of shifts and social distancing, require the increased digitisation of processes in order to ‘work digitally’.

Ineco’s experience in this field has enabled it to ensure the continuity of work and to fulfil its commitments during this period, although it is necessary to continue developing this methodology for its generalisation as a working standard. As part of this process, a body of documentation is being created to contribute to the success of this endeavour through specific manuals, guides, process automation tools, etc. These actions are complemented by the creation of a digital community of practices that will serve as a meeting point for all those interested in the application of the methodology within the company, people from different fields and with different visions that contribute to establishing and prioritising needs.

Although BIM, as a methodology or set of processes, does not distinguish
between areas, over the last year Ineco has developed various linear infrastructure projects with BIM as the work methodology. These are very different types of projects, ranging from metro or high-speed lines to roads, and applied to various stages of the life cycle, in line with a methodology that aims to address that whole life cycle. Significant progress has been made during this period in areas where the application of BIM methodology faced the greatest challenges:

AWARD GIVEN FOR BIM-GIS INTEGRATION ON A HIGHWAY PROJECT

Some of the more important areas of innovation related to broadening the horizons of the application of this methodology are those involving integration with GIS, which recently received the Special Achievement in GIS (SAG) Award given by Esri, a world leader in software for Geographic Information Systems. This work aims to integrate digital information from different sources and technologies into a common environment that encourages and maximises its use, is accessible to as many parties as possible and facilitates decision-making in project implementation.

The award acknowledges the company’s ground-breaking work in Spain in the development of GIS technology thanks to the integration of the BIM methodology into a GIS environment to develop a virtual 3D model of the future A-76 Ponferrada-Ourense Highway, on the Villamartín section of the Abadía-Requejo stretch for the General Directorate of Roads, part of the Ministry of Transport, Mobility and Urban Agenda (MITMA).

BIM-GIS display of the A-76 highway.

The Special Achievement in GIS Awards are international awards given to organisations around the world that Esri Inc. uses to show its appreciation for the use of its technology in addressing some of the world’s most important challenges. Every year, different projects around the world in different fields are recognised for demonstrating their capacity for innovation and good use of GIS in solving new problems.

A technical solution for a light metro. This is an international project designed as a technical solution for the building design of a light metro, just over 2 kilometres long, to be connected to an existing external line. The design comprises a 2 km tunnel with three access points, an evacuation tunnel and three underground stations, involving numerous infrastructure disciplines at the same time. The route has very demanding occupation requirements, which means that the coordination and implementation of the infrastructure is especially important. 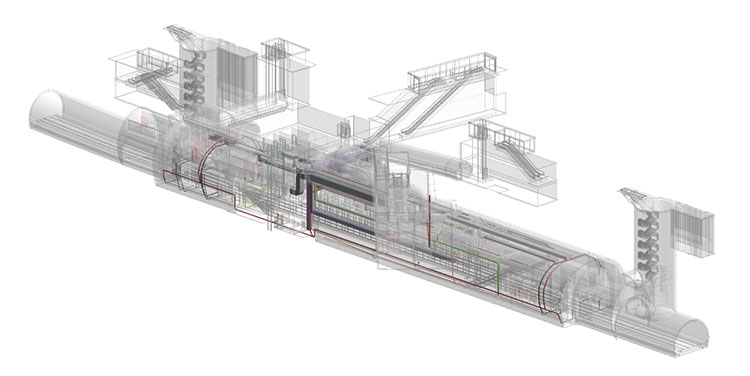 Six teams were involved in the design, generating models belonging to different companies and countries, which is why collaboration between them is also a key aspect, using two common data environments. The BIM uses that were applied included 3D coordination and generation of 2D documentation and quantity take-off.

Three-dimensional models for a highway in Costa Rica. Normally we think of the sequential development of the generation of BIM models in the design stage (project) and their use in subsequent construction and maintenance stages, but in certain cases and under certain circumstances, BIM can be applied in more advanced stages even if it has not been executed in initial stages. This involves digitising the project documentation and converting the drawings into three-dimensional models with all of the associated information. The objective is to use it to monitor the work, simulate construction, obtain quantities for certification and generate ‘as built’ information. 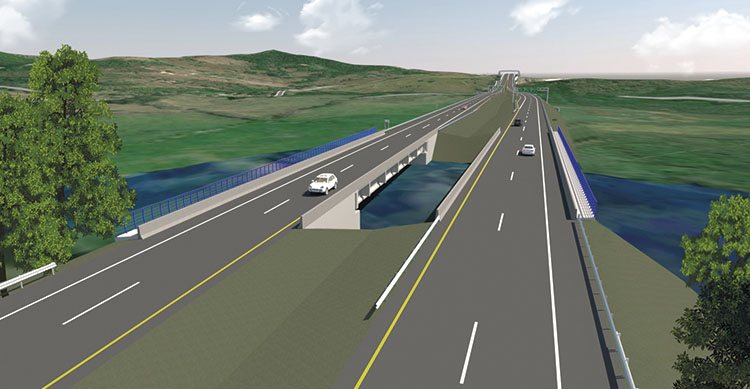 This was the case for the San Gerardo-Barranca stretch of the Pan-American Highway in Costa Rica. The project was carried out in the ‘traditional’ way, obtaining the usual documents: design report, annexes, plans, specifications and the bill of quantities. Based on this documentation, Ineco generated the digital models that represent the entire section and all its disciplines: earthworks, pavement, structures, drainage, signs, etc. The digitisation of the project documentation allows the detection of inconsistencies between disciplines. The three-dimensional visualisation alone makes this detection possible. In addition, the linking of construction elements and budget quotes, a number of inconsistencies in quantities and the bill of quantities were detected. A filtering analysis by relevance was then carried out, determining the inconsistencies that were actually relevant for the work stage and which would need to be taken into account.

Currently, we are waiting for the beginning of the works in order to start the monitoring work to be connected with the actual construction plan.

A digital twin to manage a railway construction site. As in the previous case, a high-speed railway section at the access points to Extremadura has been modelled for use in the construction stage, in this case a track assembly site. The objectives are as follows:

The work includes the installation of 55.1 kilometres of double track on ballast, as well as some smaller sections of single track on ballast on a double track platform (around 400 metres) and slab track (around 3.7 kilometres). In this case, the complexity arises from the length of the section involved and the need to identify the basic objects to be introduced in the digital models. Before work began, the corresponding BIM Execution Plan was drawn up, which included the definition of the level of graphic information to be included in the models, taking into account the disciplines involved in a project of this nature (surface treatments, ballast, sleepers, rail, welding and track devices); specific tables were also included for the non-graphic information for each type of element. In the absence of a standardised classification system that includes these type of elements, an ad hoc system was created. The Execution Plan also defined the common data environment, which is essential for sharing information between the site office teams and the design office. Lastly, the quality control model was designed according to the arrangement shown bellow. In total, 38 route and track models were generated, taking into account the section divisions of the project.

Previous Article A sea of knowledge 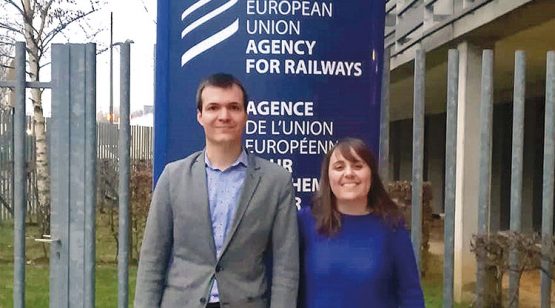 An ERTMS manual for train drivers