Member States seek methods to make progress in putting the Atlantic and Mediterranean corridors in place. Two large routes for transporting passengers and goods, linking the main ports and urban nodes of southwest Europe with the large industrial centres on the continent. 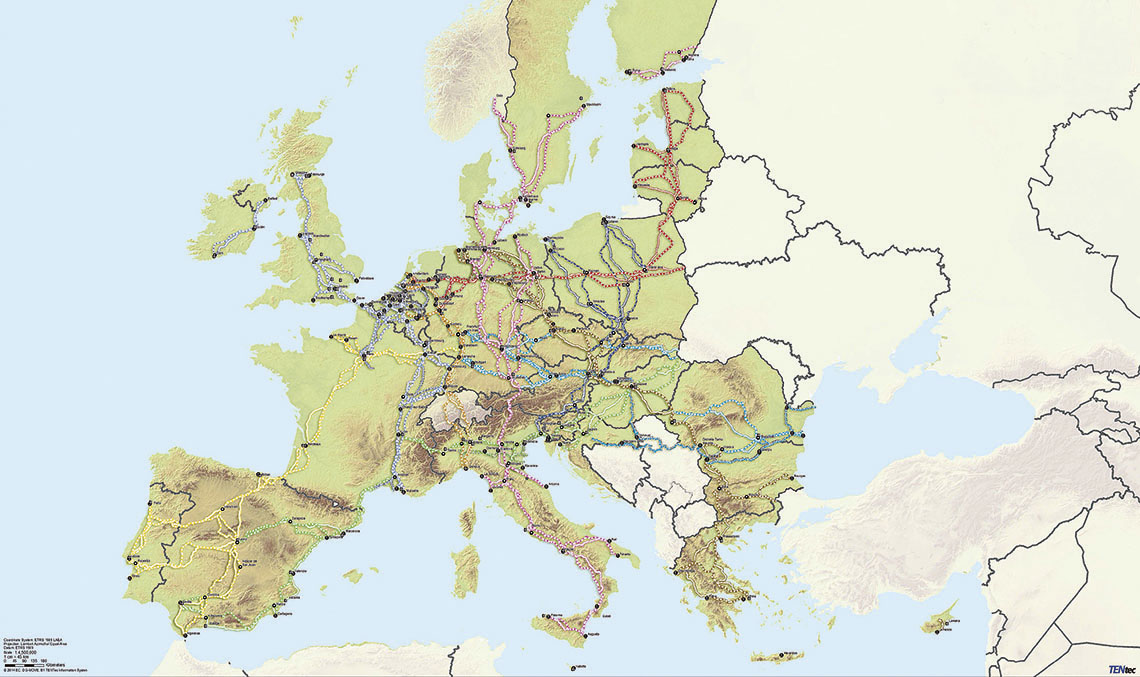 Improvement of transport routes has been, since ancient times, a constant quest for the survival, wealth and development of peoples. With the creation of the European single market, having an interoperable transport network became one of the basic foundations to make economic relations between member states possible. The aim was to have modern infrastructure for the transportation of passengers and goods, held together by common legislation and technology that would exceed the simple juxtaposition of national roads. Thus began the trans-European transport routes, called TEN-T corridors, which comprise transport by road and railway, including waterways and seaports, as well as the airport network. Also in this category are smart transport management systems, like Galileo, the European system of satellite radionavigation, or the European Rail Traffic Management System (ERTMS).

In the 1980s, the EU began to establish which priority routes where greatest management and financial efforts would be directed, with the aim of facilitating communications, mainly between the main seaports and the large industrial areas and logistics centres of EU countries. On the basis of the studies conducted came the nine major Core Network Corridors (CNC) which structure Europe. Due to Spain’s outlying geography within the European continent, two of the nine corridors run through it: the Atlantic Corridor and the Mediterranean Corridor.
Subsequently, European Union Regulation N.º 1315/2013 established the specific alignments and nodes that make up each corridor, as well as the technical requirements necessary to have a solidly structured, homogenous, multimodal network that provides the backbone of European mobility in place by 2030.

The studies on the Core Network Corridors, conducted by consortia of consulting companies in the Member States, include analysis of demand, traffic forecasts, identification of improvements to transport networks and services, environmental impact analysis, innovation methods, etc. The analyses of these studies enable the projects and means necessary to meet the technical requirements set out in European law to be established. This must be implemented by Member States under the supervision of the European Commission.

Studies and work plans for each corridor

Since 2015, the EU has promoted the preparation and implementation of new work plans with specific actions to give impetus to the Atlantic and Mediterranean corridors, two projects considered to be top priority, in which Ineco has participated very actively since the origins. Proof of this is to be found in the previous studies on the EU corridors, as well as studies of the Vitoria-Dax, San Sebastián-Bayonne and Figueres-Perpignan railway connections, and the current studies of the Atlantic Corridor and the Mediterranean Corridor up until the end of 2017.

When the lists of projects and methods of each corridor are drawn up and the targets set out by the European Commission are met, they must be put up for political consensus among the various Member States, central governments and the regions, as well as cooperation and understanding between the various state and private agents involved. This is why the Corridor Fora and Working Groups, regular meetings that take place at the European Commission’s headquarters in Brussels, to which all stakeholders are invited, are very important. In the Corridor Fora, the consultants present the main progress from the corridor studies and open debate is held on the most important issues, offering attendees the possibility to respond or make comments. In the case of the Working Groups, specific technical issues are discussed, for example border matters, aspects relating to urban nodes, ports, logistics terminals, etc. in sessions with fewer participants, directed solely to the agents involved in each case. Both in the Corridor Fora and the Working Groups, the role of the consulting teams is fundamental, as they are coordinators and integrators to ensure that the studies are conducted holistically, prioritising the objectives of the corridor over individual interests.

The projects selected for each corridor and the European subsidies awarded to them are decisions of key importance both for the actors involved in international trade –infrastructure managers, shippers and logistics operators– and for the economic development of the Member States. Good evidence of the interest surrounding this is provided by the 2,800 transport companies and the 22 European ministers who attended the TEN-T Days 2016 conference, held in Rotterdam in June. The European Commission’s actions have objectives in the short (2020), medium (2030) and long term (2050), and 2050 is the final year of development, by which goods transported by land are projected to increase more than 50%.

Both the Atlantic Ocean and the Mediterranean Sea have enabled distances to other continents to be shortened thanks to their sea routes, made possible by large engineering works such as the Panama and Suez Canals. The European ports of both port fronts compete to have the infrastructure and logistics terminals necessary to assume the load of the Panamax and Post Panamax vessels which transport goods containers from Asia, Africa and America.
To manage this entire potential load, the ports require installations, technology and the land connections necessary for its rapid distribution to the population and industrial centres in the interior. At the same time, the EU created the concept of “highways of the sea”, short-distance maritime routes between ports that assist in decongesting roads. Finally, the corridor work plans seeks to gradually implement the use of clean energies and fuels that enable pollutant gas emissions to the atmosphere to be reduced. Functionally, one of the most significant challenges of this corridor is efficiently connecting the main seaports of the Spanish Mediterranean coast (Barcelona, Tarragona, Valencia, Cartagena and Algeciras) with central Europe. As such, the aim of the most important activities is to connect Spain’s ports with an international standard gauge of 1,435 mm, alter the rail network so that trains of up to 740 m can run, and remove bottlenecks. Many of these actions, those which affect the section between Castellbisbal and Almería, are currently in progress and/or the project preparation stage, in which Ineco is also participating actively. Another key aim is to build an east-west multimodal transport axis.

Additionally, the construction of an east-west multimodal transport axis has been planned to benefit and enable economic relations in southern Europe, where some of the most important urban centres are located: Madrid, Valencia, Barcelona, Marseille, Lyon, Turin, Milan, Venice, Ljubljana, Zagreb and Budapest. To make this east-west axis come to fruition, the major projects centre around eliminating the current lack of continuity in border crossings between countries, especially between Spain and France (Figueres-Perpignan), France and Italy (Lyon-Turin) and Italy and Slovenia (Trieste-Divaca). The future high speed Lyon-Turin section involves building a 57-kilometre base tunnel, which will be one of the longest railway tunnels in the world. Base tunnels are one of the largest European investments to ensure the railway’s competitive advantage over travel by road and consequently a road-rail modal diversion in especially sensitive areas like the Pyrenees or the Alps, geographical obstacles that strongly condition this corridor.

The consortium commissioned to conduct the Mediterranean Corridor study comprises PwC, Ineco, SETEC and Panteia. PwC is the consortium leader and is responsible for maintaining an up-to-date list on projects worked on by Italy, Slovenia and Croatia. SETEC and Panteia are responsible for French and Hungarian matters, respectively. Ineco shares responsibility for keeping an up-to-date list of Spanish projects with PwC Spain, providing its railway and air transport experience. Spain is a key player in the Mediterranean Corridor, as 45% of the railway corridor traverses our country, spanning the Algeciras-Madrid-Barcelona-French border, Barcelona-Valencia-Almería and Almería-Antequera-Seville sections. Ineco also leads the part relating to innovation in task 3b of the study, in which expansion of the list of Mediterranean Corridor projects is analysed, paying attention to more cross-cutting aspects.

Since in the first studies presented in 2014, 300 projects were identified, the aims of the Mediterranean Corridor consortium members centre on defining, prioritising and estimating the most essential activities, among which what is sought is to enable goods to be transported by railway rather than by road. It is calculated that, with total implementation of the corridor in 2030, 40 million tonnes of goods could be transferred from road to railway.

The Atlantic Corridor links the Iberian Peninsula ports of Algeciras, Sines, Lisbon, Leixões and Bilbao with Paris and Normandy, and continues to Strasbourg and Mannheim. It would therefore be an efficient export route for goods bound for eight seaports of the Core Network (Algeciras, Sines, Lisbon, Leixões, Bilbao, Bordeaux, Le Havre and Rouen) where the large global trade ships arrive from America and Asia (via the Panama Canal) and Africa and Asia from the Mediterranean (via the Suez Canal and the  Strait of Gibraltar). Additionally, the cities and logistics centres on the Atlantic Corridor route or its environs would benefit from the service of this corridor, enabling and stimulating their importance in international trade. Ineco currently participates in the study of the Atlantic Corridor for the European Commission in a consortium led by Portuguese consultancy TIS together with the companies EGIS, Panteia, M-FIVE and BG21. In addition to providing the information relative to Spain, Ineco has a lead role in defining the list of Atlantic Corridor projects, a job that requires identifying and analysing corridor projects in progress or being planned, gathering information from the agents involved in the projects (in the case of Spain, we might highlight the Ministry of Public Works, ADIF, Puertos del Estado (Spanish State Ports), AENA, the Autonomous Regions, private agents, etc.) on the projects’ scope, timeframe and investment needs, a key aspect to specify and establish subsequently the prioritisation of activities in the corridor.

The Atlantic Corridor has an excellent network of roads, which are almost all highways. There is partial interoperability of the system of road tolls, with various projects underway to fully implement them in the corridor. As for rail transport, some aspects such as single-track lines, the lack of electrification, or Spain and Portugal’s distinct track gauge and its alteration to match the international standard gauge (1,435 mm), are significant obstacles to the development of goods transportation. Also worth noting as other hurdles to climb in the corridor’s railway network are the partial absence of the ERTMS and the need to adapt infrastructure to allow trains of up to 740 m.

The European Commission has emphasised the need to solve access from ports to other modes of transport, particularly the railway. At the port of Algeciras –the largest of the entire corridor by volume– reports underline the essential importance of the electrification of the line and alteration of tracks and terminals to admit the aforementioned 740-metre freight trains.

Other proposals are the improved navigability of the River Seine between Paris and Benelux and access to the railways from all airports along the corridor. Only Paris-CDG (Roissy) Airport meets all the requirements of Regulation (EU) N.º 1315/2013 and has a long-distance railway link. Paris Orly and Madrid Barajas Airports link to the suburban railway and metro; those of Porto and Lisbon only with the metro; and Bilbao and Bordeaux do not have railway links.

The eight keys of the European corridors 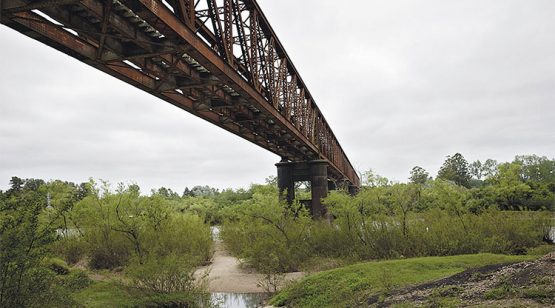