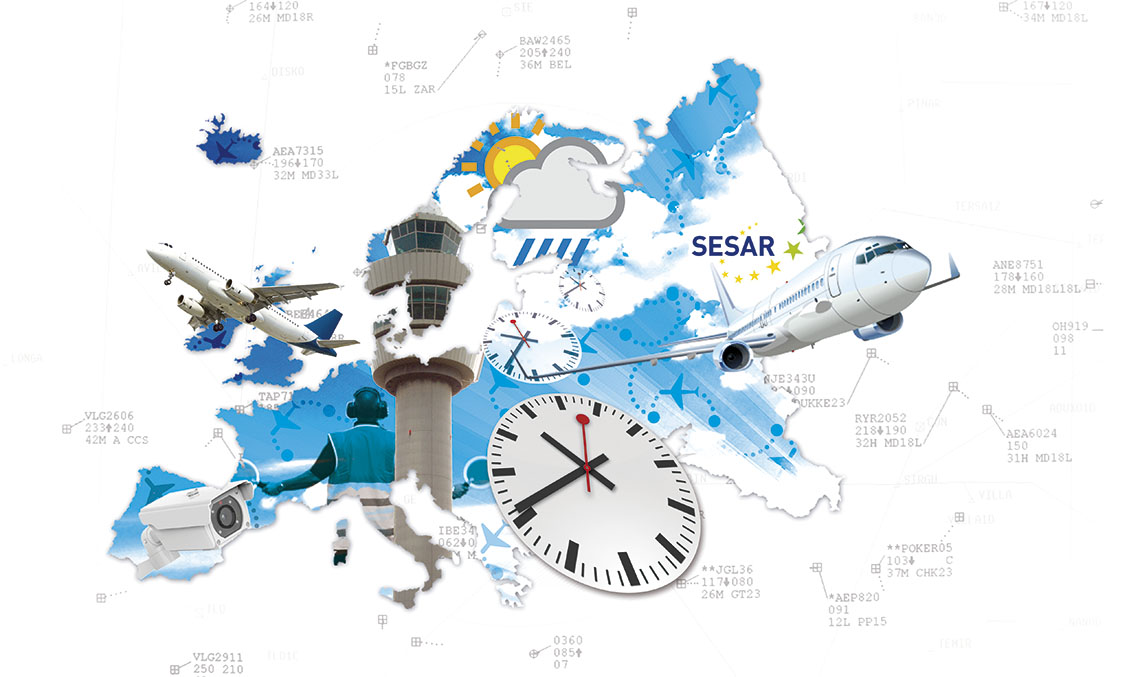 PRIORITY MEASURES. The EU considers it a priority to improve European airspace management by increasing the safety and number of operations and reducing the costs and environmental impact associated to each flight. / ILLUSTRATION_ANA LAGO

December 2016 saw the completion of the first SESAR research and development programme, with a total of 63 Air Traffic Management (ATM) solutions, all with a shared goal: increasing the number of air operations, increasing safety, and reducing the costs and environmental impact associated to each flight, all priority issues for the EU. This was possible thanks to the combined work of airport managers, air navigation service providers, the aviation industry and airspace users. This was a fruitful collaboration as part of the company SESAR Joint Undertaking (SJU), a public–private partnership bringing together all Air Traffic Management (ATM) R&D initiatives in Europe. Founded in 2007, the company was created by the European Commission (EC) and Eurocontrol to coordinate the growing number of partners and to manage financial and technical resources, with a view to making the Single European Sky project a reality.

According to statements by the EC, SJU has met its expectations. The parties responsible for technological development for the future European Air Traffic Management system presented a total of 63 solutions at the end of 2016, defining standards, operating procedures, technology and pre-industrial components. These solutions were developed with a clear focus on subsequent deployment and implementation.

Together with its shareholder ENAIRE (formerly Aena), Ineco began participating in 2000 in the area of ATM in European R&D Framework Programmes, which were co-financed by the European Commission and ultimately replaced by SESAR JU to unite efforts, to avoid the duplication of work and to promote the deployment and implementation of the different developments. Since the development phase got underway in 2008, ENAIRE has participated in 95 projects (the programme includes over 300), taking a leading role in 16 of these. Ineco’s contribution to SESAR began in December 2010, with the company ultimately participating in 54 projects. Participation in SESAR has allowed us to keep up to date with the evolution of ATM technology and operations, putting this experience at the service of our clients and shareholders. Regarding this, it should also be highlighted that Ineco, jointly with ENAIRE, led WP6 Airport Operations, diferent kind of operational projects and also Operational Focus Area(OFA) in which projects were grouped assessing the same concept. The company also contributed in the development of operational concepts in the Network, Route, TMA and airport areas and in the coordination and execution of validations (both in fast and in real time) and the subsequent analysis of indicators from different perspectives (for example operations, economics, environment, safety and human factors).

Ineco experts also developed Touch It!, a tablet application enabling measurement of the workload of any human actor in their professional setting, whether this be aeronautics or not. PLANNED OBJECTIVES. The hexagon in the graph above shows SESAR’s six proposed performance areas for measuring the success of the works carried out. The blue hexagon shows SESAR‘s initial targets, with the green one showing the high level of achievement reached by 2015, with a year still remaining for development.

In order to truly meet the objectives set, conceptual development of solutions is not sufficient. The industry must put these into production, at the same time deploying or implementing them. Similar initiatives in the past have not achieved this. However, there is now a body (the SESAR Deployment Manager) and a budget earmarked for making this happen.

The SESAR deployment phase guides and ensures the deployment of the developed solutions in a coordinated way within the European Union. As part of this, the EC published a regulation in 2014 called the Pilot Common Project, defining the first large-scale actions to be carried out in order that the technologies presented be available and put into operation. This is a mandatory regulation which all providers must put into effect in accordance with the implementation phases. This level of integration and information will also involve on-board equipment, manufacturers, flight personnel, controllers, airlines and the aeronautical industry as a whole.

What are the benefits? In addition to advances in terms of the safety of air operations and reducing fuel consumption, the advantages include interoperability and reduced operating costs. But above all, it is also a political achievement, a shared experience which confirms the movement towards a more united, collaborative Europe, gradually finding supranational systems to bridge the historical borders fragmenting and hindering the dream of a unified territory. PRESENTATION OF PROJECTS. Form left to right: aeronautical engineers Ester Martín, José Manuel Rísquez and Laura Serrano, who attended the SESAR Showcase event on behalf on Ineco and representing ENAIRE. The event was held in Amsterdam on 30 June and featured presentations on the 63 solutions developed.

Starting in October 2016, a second phase of development, SESAR 2020, is following suit, not only in launching the development of new solutions but also in completing the development of those that began in the first phase. This new programme presents a series of R&D projects, from early conceptual ideas to validation in operational settings for deployment. These projects are grouped into three large areas:

In the first development phase, there was a separation between operational projects and systems projects. This risk disappears in SESAR 2020, as each project includes a team of both operational and systems experts, with both groups being involved in the entire life cycle and development of the project: concept, requirements, validation, verification, etc. In addition, certain processes have been elaborated to ensure greater involvement from airlines, which are one of the most important actors in the world of ATM as they will be the users of the future ATM system developed by SESAR.

The members of SESAR JU

During the first SESAR development phase, the main actors in European ATM were represented, as were the EC and Eurocontrol, the founding partners. Participating air navigation service providers were ENAIRE, DFS, DSNA, ENAV, NATS and NORACON (a consortium of providers from northern Europe and Austria). Participants from the manufacturing sector of the industry were Airbus, Alenia, Frequentis, Honeywell, the Spanish company Indra and the consortium of the companies NATMIG, Selex and Thales. From the airports sector, the SEAC consortium (BAA, FRAPORT, Munich, Schipol, Zurich and ADP) also participated. Participating as affiliates of ENAIRE were Aena as an airport manager, Ineco and CRIDA. In this second development phase, Airbus, DFS, DSNA, ENAIRE, ENAV, Finmeccanica, Frequentis, Honeywell, Indra, NATMIG, NATS, SEAC and Thales renewed their commitments, and five new partners joined: COOPANS, AT-ONE, B4 (made up of ANSPs from Poland, Lithuania, the Czech Republic and Slovakia), Dassault Aviation and Skyguide.

The set of solutions generated by SESAR comprises a broad range of actions, in some cases representing a paradigm shift in the way operations have been run until now. In this sense, the new developments make it possible, for example, to change concepts such as the way in which aircraft are separated, the management of civil and military airspace and aerodrome control, which in some circumstances can be done using a remote control tower. In these pages, we highlight five of the 63 solutions developed, giving an idea of the magnitude of the works, the types of activity and their contribution to the Single Sky: 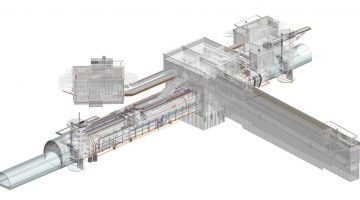