A key project for Gran Canaria

The completion of the Las Palmas ring road in 2021 will complete the circle of roadways around the capital, substantially improving the city’s connections with other parts of the island. 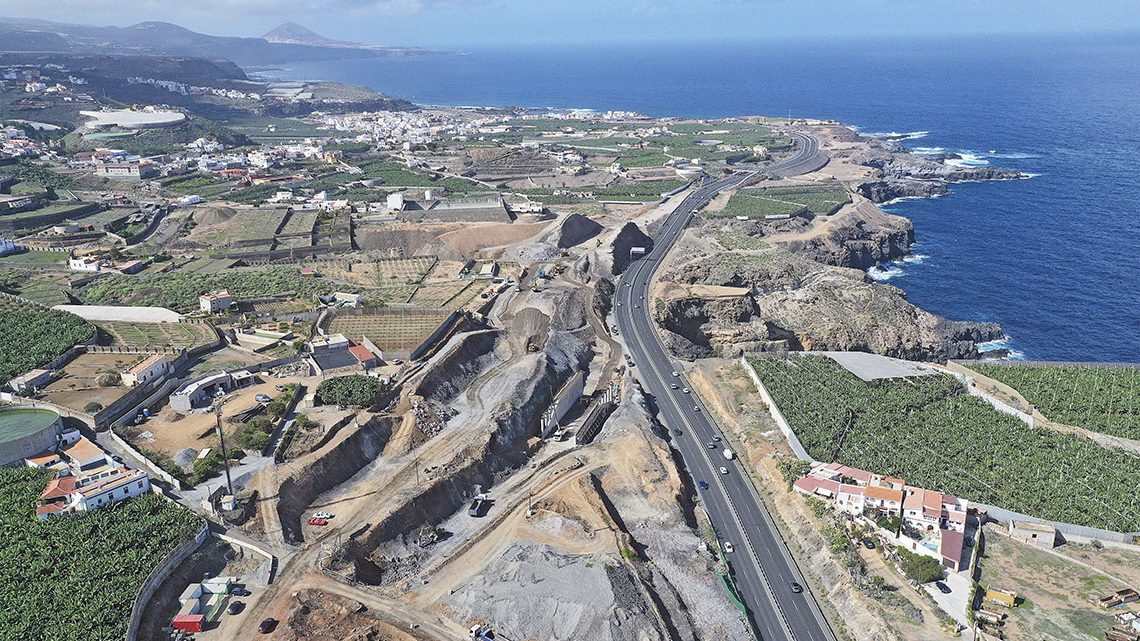 Aerial view of the works for the connection between the GC-3 highway, in which Ineco has been involved since 2007, and the GC-2 Northern highway. PHOTO_UTE ARUCAS

Work on Phase IV of the Las Palmas de Gran Canaria ring road is progressing at a good pace: after 14 years of work and several interruptions in its execution, the main section of Phase IV is scheduled for completion in 2021. The construction of this phase of the highway, which includes the Tamaraceite-Tenoya-Arucas-Costa section, will connect Phase I with the GC-2 regional highway, linking the island’s capital with the inland municipality of Arucas and providing dual access from the northeast to Las Palmas de Gran Canaria.

Phase IV of this highway is part of the road agreement signed in the 1990s between the government of the Canary Islands and the former Ministry of Public Works. Its conclusion will mean the completion of the Las Palmas ring road, which was started in 1997, which will relieve traffic congestion in the city, and also improve accessibility, providing a dual entrance to the north-eastern access.

The Government of the Canary Islands estimates that approximately 60,000 vehicles will use the new stretch of road every day

The Ministry of Public Works, Transport and Housing of the government of the Canary Islands estimates that some 60,000 vehicles will use the new section every day, which will reduce traffic congestion at key points in the city such as Plaza de América, the Julio Luengo tunnels and the Torre Las Palmas interchange, improving traffic in the vicinity of the capital, with a reduction in travel distances, waiting times and the resulting pollution, a positive effect already noted after the partial opening of a new section of Phase IV in 2016 as far as the Semi-interchange-2 in the municipality of Arucas. 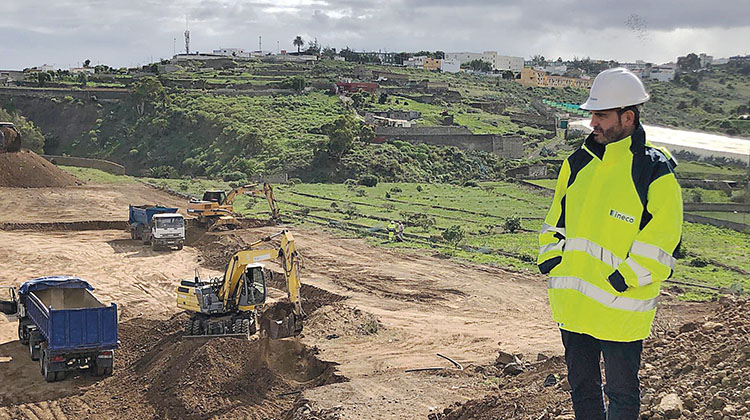 In addition to the technical difficulties inherent to a linear project running between ravines and mountains, there are also those inherent to a semi-urban environment. All this, together with the economic crises experienced in recent years, has delayed the construction of this highway and has also meant an arduous technical task owing to several changes in the types of the interchanges and the construction of pedestrian walkways requested by local residents. These changes, which were not planned in the original project drawn up in the 1990s, made it possible to adapt the project to the demands of the island residents over the years, with the total budget for the works exceeding 125 million euros.

The Arucas joint venture, in which Ineco and Grusamar each have a 50% stake, is providing technical assistance for the monitoring and supervision of the works on the Las Palmas de Gran Canaria ring road, specifically Phase IV of the Tamaraceite-Tenoya-Arucas-Costa section. With a budget of more than 6 million euros, the contract includes, among other activities, the analysis of the work in its updated environment; an analysis of the impact on areas of potential archaeological interest or those affecting historical heritage; the status of expropriations; a study of the repositioning of rights of way; a study and monitoring of road safety; work quality control; health and safety; and the drafting of the necessary alternatives or modifications to the original project.

A route through ravines

The route of the main section of the highway, with a total length of 7,350 metres, starts at the intersection of the GC-3 (Phase I of the Las Palmas ring road) with the GC-21 (Teror-Tamaraceite) and will end at the interchange between the GC-2, the GC-20 (Arucas-Costa) and the GC-3. Construction works in Phase IV have affected more than 500 properties in the municipalities of Arucas and Las Palmas de Gran Canaria.

From its start at the Tamaraceite interchange, where the two branches connecting with the future highway are aligned, the route winds for 850 metres following the existing GC-21, heading in a north-westerly direction and running between Mesas Bajas and Tenoya, where interchange 1 (KM 1+490) is located, giving access to both towns. From this point onwards, the terrain becomes more rugged and the Barranquillo de Tenoya (KM 1+800) is crossed by a 150-metre-long viaduct (1.7), the Barranco de Tenoya (KM 2+400) with another 520-metre-long viaduct (2.1), the Lomo Grande through a cut (KM 2+725) and the Barranquillo de la Dehesa (KM 3+300) by means of a 380-metre-long viaduct (3.1).

After this ravine, the route passes through the area known as La Herradura on an embankment, where Semi-interchange-2 has been built at KM 3+800, which provides access to the villages of Cardones and Santidad.

The Arucas joint venture, in which Ineco and Grusamar each have a 50% stake, is providing technical assistance for the monitoring and supervision of the works

After passing this interchange, the highway runs along a slight cut 250 metres long until it reaches the Barranco de Arucas ravine, which is crossed by means of a 150-metre-long viaduct at a maximum height of 45 metres above the bottom of the ravine (4.1). At this point, the route turns in the northerly direction, running to the east of the town of Arucas, and at KM 4+400 it passes interchange 3, which gives access to the town via the GC-20. After passing the interchange, the route runs along a cut parallel to the left-hand side of the GC-20. The P.S.-5.6 overpass is planned at the interchange of the GC-301 road with the highway, which will connect the villages of Cardones and Trasmontaña with the GC-20. 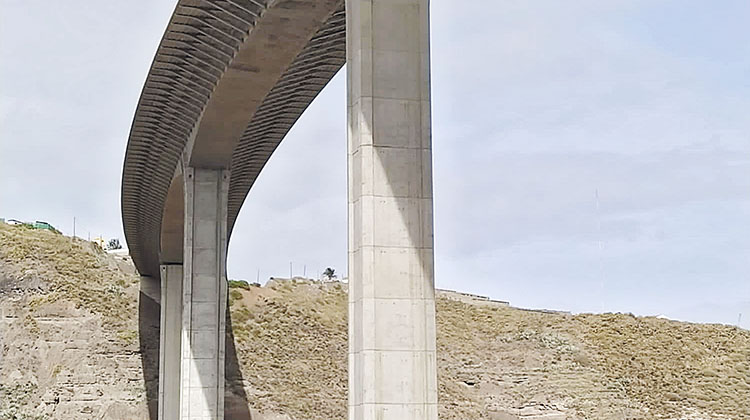 The viaduct over the Barranco de Tenoya, with a total length of 528 metres and a height of over 120 metres. PHOTO_VÍCTOR CAMINO

For the final 1,200 metres, the route continues to run on a cut parallel to the GC-20 until it connects with the GC-2 road at KM 7+350, where the last interchange of the project, Semi-interchange-5, is located which, in combination with the existing interchange, allows all the movements of the aforementioned road with the planned highway.

Open-air covered walkways, viaducts and other unique points on a complex route

Previous Article ERTMS to the centre of Turkey 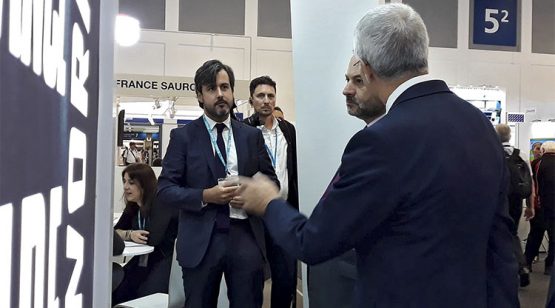