A tunnel under the Thames to relieve London’s congestion

The arrival of the tunnel boring machine in the capital city of London is a crucial step in the construction of this major project beneath the River Thames: 1.4 kilometre twin road tunnels will provide a major relief to congested transport in the east of the city. Ineco is acting as an Independent Certifier, bringing its extensive experience in the supervision of particularly complex tunnels. 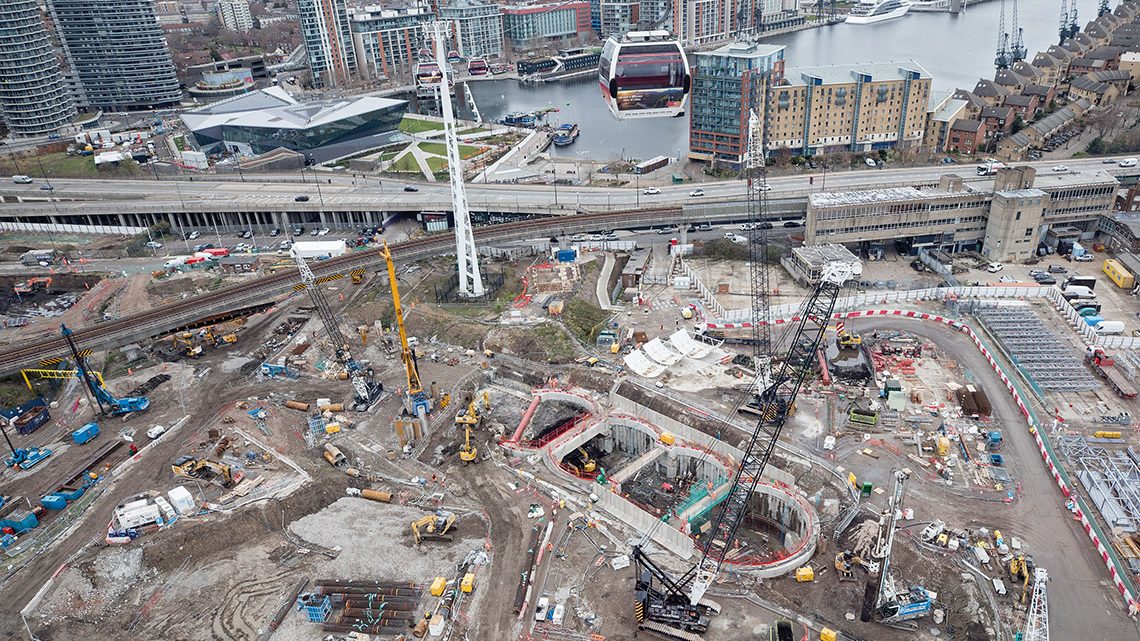 The LAUNCH CHAMBER. It is made up of four adjacent shafts with two counterforts on each side, between shaft and shaft, which give it a peanut-shaped ground plan. / PHOTO_RIVERLINX

The new tunnel will be the first infrastructure to be built across the Thames since 1991, increasing public transport provision sixfold upon its commissioning. The project, which is being undertaken by London’s public transport authority Transport for London (TfL), is the largest road investment in this area of the city in the last 30 years. It includes the design and construction of 1.4 kilometres twin bored tunnels under the River Thames, which, together with the cut-and-cover tunnels at both ends, add up to a total tunnel length of 2 kilometres. The design also includes the necessary road works and junctions for tunnel access. With a budget of more than one billion pounds, the project has been awarded to the RiverLinx consortium, which is responsible for its design, execution, financing, operation and maintenance. RiverLinx is made up of Spanish operator Cintra, construction companies Ferrovial-Agroman and BAM Nuttal, engineering firms SK E&C, designers Ayesa, Arup, Cowi and financiers Aberdeen Standard Investment and Macquarie Capital. 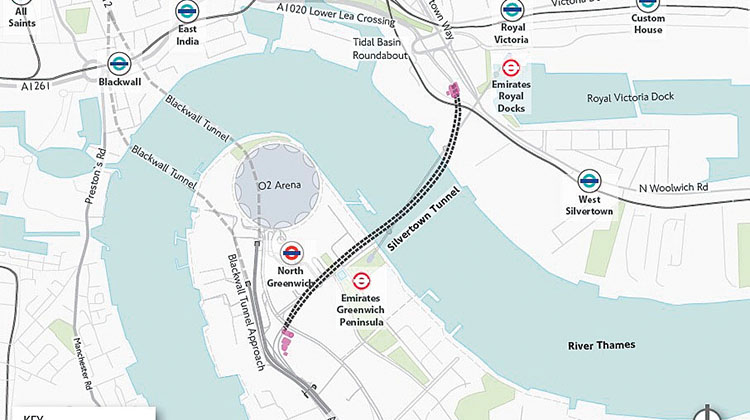 General layout of the route of the tunnel under the River Thames.

In turn, RiverLinx has contracted Ineco/RPS joint venture as an Independent Certifier throughout the design and construction process. As such, Ineco is participating in the construction of the tunnel, bringing its extensive experience in the supervision of particularly complex tunnels. The contract is being executed through a joint venture with the company RPS, in which Ineco has a 57% shareholding. Both companies will provide support as an Independent Certifier until the commissioning of the new tunnel. The design phase started in 2020, with work scheduled for completion in 2025.

Currently, the only means of crossing the Thames in this area of the city is the Blackwall Tunnel, which has been in service for over 120 years, with very high levels of congestion (over 48,000 vehicles per day in each direction) and gauge limitations. It is estimated that more than one million hours of congestion are generated each year due to tunnel capacity constraints, with an economic impact of 10 million pounds each year.

The new tunnel will be the first road crossing under the River Thames since the Queen Elizabeth II Bridge opened on the outskirts of London more than 30 years ago. It is estimated that the tunnel’s area of influence will see an increase in population of 650,000 people and the creation of 286,000 new jobs by 2036. Once operational, it will enable a six-fold increase in public transport capacity in this area of London. Today, due to the limitations of the tunnels, there is only one bus service that allows crossing between the two eastern neighbourhoods of the city. The new tunnel will have one bus lane in each direction, allowing an increase to 37 bus services per hour. All services will also be operated with zero-emission vehicles.

TfL estimates that improving congestion in and around Blackwall will significantly reduce journey times. Studies predict that, without the Silvertown Tunnel, both traffic and emissions from congestion in the Blackwall Tunnel would increase in the coming years, such that morning rush hour delays in east and south-east London could increase by more than 20% on average. The new infrastructure will help to improve air quality in this area of the city by reducing congestion and increasing the flow of public transport, as well as making connections north and south of the river more resilient.

Description of the works

In addition to the tunnels, the works include the design of the accesses and the roads connecting them to the existing network, which are largely developed using open cut and cut-and-cover techniques by means of  slurry walls, sheet piling, micropiles and in-situ walls.

The tunnel is made up of two tubes built with an EPB TBM (Tunelling Boring Machine) of 12 m in diameter to accommodate a cross section with two unidirectional lanes of 3.50 m for each tube, with one of the lanes being exclusively for the circulation of buses, including double-deckers, and freight transport.

The tunnel boring machine was manufactured in Germany by Herrenknecht. It is approximately 82 m long, weighs around 1,800 tonnes and will have a cutting surface of almost 12 m.

Following the execution schedule, the tunnel boring machine will start boring the first tube (southbounds) from Silvertown, where the launch chamber is located, turn around in North Greenwich at the rotation chamber and continue boring the second tube back to Silvertown to the extraction shaft. The infrastructure will include seven cross passages connecting the tubes at 150 m spacing.

Overall, the construction team will manage a total excavation of 600,000 m3 and 100% of the extracted material will be transported by river, minimising the impact of construction traffic on neighbouring communities and roads.

The project also incorporates maintenance buildings and road works and surface links, including an overbridge and a pedestrian and cycling bridge. The works are expected to be completed in the first quarter of 2025 and will be located within the ultra-low emission zone.

Geology under the Thames

London sits geologically in a basin that formed 65 million years ago, with limestone bedrock overlain by layers of clay, sand and gravel. The stratigraphy of the area corresponds to the following formations according to depth:

The tunnels, except for the entrance and exit sections, will run mainly through the clays of the London Clay, Harwich and Lambeth Group formations, all of which are characteristic of the city. The tunnel overburden, while variable, will be between a minimum of 5 m and a maximum of 23 m, with an average overburden generally just over one diameter.

Challenges of the independent certifier role

Both TfL and the RiverLinx consortium jointly agreed to appoint Ineco-RPS JV as an Independent Certifier for the design, construction and implementation of the safety equipment for the Silvertown Tunnel Project tunnels.

The main purpose of the services to be performed is to issue a Permit to Use Certificate, a document confirming that the project has been carried out in accordance with the requirements specified in the Project Agreement between TfL and RiverLinx, at the end of the execution of the works. This includes the technical and administrative specifications of the entire design and construction process, independently certifying their fulfilment. To this end, the necessary inspections and audits shall be carried out and the previously established quality processes shall be supervised, including the tunnel’s equipment and installations (lighting, ventilation, fire-fighting equipment, signalling, etc.).

The inclusion of a third party certifying the work therefore implies being recognised as an impartial assessor who, in addition to specialist knowledge, has the necessary experience in management, regulations and quality control.

In its role as Independent Certifier for the Silvertown tunnel, Ineco is bringing more than 20 years of experience in the design and execution of this type of infrastructure. The company has extensive experience in similar major projects, particularly in the design, inspection and construction management of tunnel works, such as those carried out for the Spanish high-speed AVE network, which include the tunnels of Pajares, Abdalajís, Guadarrama, Bolaños and the most recent tunnel between Atocha and Chamartín. It was also involved in the plan to bring 310 tunnels on the National Highway Network into line with European standards, or in international projects such as the Haramain in Saudi Arabia, the British HS2 high-speed network, the Paseo del Bajo road in Buenos Aires, or the Rodoanel Mario Covas in São Paulo.

The work, in a joint venture with the company RPS, began in early 2020 and will be completed once the services are scheduled for completion in April 2025. During the course of these duties, both Ineco and RPS will rely on their teams of experts from the Dublin and Madrid offices, while also maintaining a continuous presence at the worksites involved in this major project.

Previous Article Drones: the good and the bad 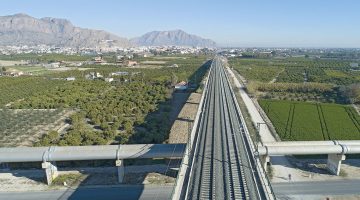