In these pages, the architect Bruce Fairbanks and the aeronautical engineer Roberto Serrano reflect on the types of control towers. They are both professionals, experts in aeronautical projects with more than 20 years’ experience, and they offer us their personal approach in different but complementary disciplines. 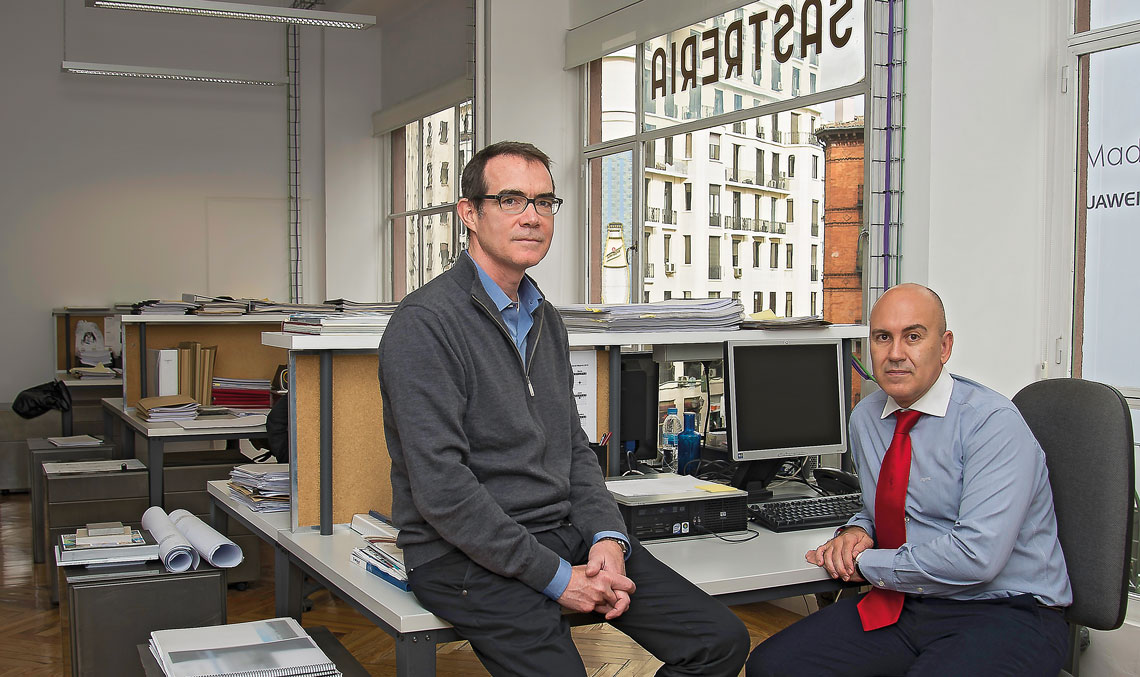 ARCHITECT vs. ENGINEER. Bruce Fairbanks and Roberto Serrano in the offices of Fairbanks Arquitectos, located on Gran Vía, in Madrid. / PHOTO_ELVIRA VILA

His work is characterised by the search for architectural expressiveness through the meticulous integration of functional elements and construction systems from the start of the design process. In Spain, he has designed the control towers for the airports of Madrid, Málaga, Barcelona and Santiago de Compostela, amongst others. He has also designed five control towers in Algeria, and the control tower for Bogotá airport.

“To create a unique symbol for each place”

Bruce Fairbanks, founder of Fairbanks Arquitectos, has accumulated extensive experience in the design of airport buildings since 1996 when he won the tender for the construction of the Madrid-Barajas control tower.

Presently in the world of airports there is a trend to promote the control tower as a symbol, an image that represents the airport and a reference point for the arrival in, and departure from the city where it is located. This trend has created increased interest in architectural execution in the design of control towers in addition to their functional requirements. It is precisely the individuality of these requirements that significantly affects the type of building, such that throughout history there are various examples of “types” of tower designs, which, once designed, were repeated in various airports: one notable case is the leoh Ming Pei control tower. It was designed between 1962 and 1965 with the objective implementation in 70 airports, although in the end 16 were built. The concept of locating in upper levels strictly that which was necessary was developed, putting the maximum amount of functions in the base building, which was adapted to the specific characteristics of each location. As such, the tower could be prefabricated and repeated with standardised equipment, giving the airport network an image of safety since a controller could work in any location without having to adapt. The tower was designed with 5 standardised heights (18-46 m) in accordance with visibility requirements in each location. The control tower’s cab is pentagonal so there are no parallel façades and so as to avoid reflections. In Spain, in the 1970s, Juan Montero Romero, an aeronautical engineer, built a tower, which was repeated in several cities: Málaga, Alicante, Valencia, etc.

To create a landmark, the architect must find within the functionality the characteristics that distinguish one tower from others

Converting control towers into airport landmarks and reference points for cities is a challenge in the work of an architect: creating a symbol, always unique for each location, which meets all of the requirements for the optimal functioning of the tower. The location, the height of the control room, its form and the layout of its structural elements are some of the first elements to define. Control towers typically have a base building and a shaft that supports the upper floors, which are designed to adapt to the control operations. Given the form, with an upper part and a lower part and the height of the type of building, in my opinion it is essential to incorporate the construction process into the design of the tower, and this is what I have done in those which I have designed. This design comes from an analysis of the functional aspects, the programme and the location. To create a landmark, the architect must find within the functionality the characteristics that can distinguish one tower from others and strengthen them to create a unique tower with its own character in each case.

The following examples of control towers show diferente conceptual approaches to design this building type and the elements that diversify its design.

The Dulles tower has all of the equipment rooms at a height, elegantly assembled by Saarinen with two juxtaposed bodies. The form of the tower is integrated with that of the terminal building, also designed by the same architect.

The upper part of the JFK tower, 97.5 metres in height, contains only the aerodrome control cab and half way up the shaft there is the platform control room, which takes the same form as the upper levels.

The Adolfo Suárez Madrid-Barajas control tower had the specific feature of a 400 m2 equipment room located at a height. To resolve the transition between the shaft of the tower and the projection, an inverted half sphere was adopted, with a floor for air conditioning equipment being inserted in the support. The octagonal shape defined for the
cab is extended throughout the top of the building, the structural design of a central column and 8 perimeter columns is repeated on all levels.

Another particular feature of the tower is the construction system designed as an integral part of the design. The shaft is built with prefabricated segments assembled in spirals, which, on the inside, contain the service ducts and circumscribe the emergency stairway. The upper floors were built with a metallic structure on the floor and subsequently hoisted onto the shaft. The system allowed the tower to be built in nine months, without using scaffolding.

The functional requirements were similar to those of Barajas, with the exception that a large part of the equipment is located in the base building. The resistant structure is defined independently from the functional elements of the shaft, which was developed as a representative design element. An eight-pointed hyperbola generated from the octagonal shape of the cab holds the upper floors.

The hyperbola links the tower with Catalan Modernism and Antoni Gaudí, who used this form in many of his designs, including on the domes of the Sagrada Familia. The construction system is a representative part of his design. The assembly of the hyperbola, built with prefabricated concrete girders, was guided by a central aluminium structure designed to contain the elements of the shaft. The upper floors were built on land and hoisted into position, supported by the eight points of the hyperbola, consolidating the whole structure when it was under load.

Since 2000, he has been working for Ineco in the airport building area, from which he has participated in enlargements of almost all airports in Spain (Madrid, Barcelona, Palma de Mallorca, Menorca, Valencia, Girona, Jerez, Ibiza, Santander, Málaga, Gran Canaria, etc.) and has carried out different types of projects in the airports of Odessa (Ukraine), Montego Bay (Jamaica), Cartagena de Indias (Colombia), Tikrit (Iraq), Kastelli (Greece) and Chiclayo (Peru).

“In the future, it will not be necessary to view operations”

Roberto Serrano has participated in more than 50 aeronautical projects, amongst them, the NET and SAT control towers of Madrid-Barajas airport and the new control tower of Eldorado airport (Bogotá).

Although the first control towers date back to the 1920s (in 1921, Croydon airport in London was the first in the world to introduce air traffic control), it was from the 1930s that they became commonplace, due to the fact that growing aircraft traffic made controlling and managing it necessary. At that time, in which technology was nothing like the current systems, the need to visually supervise aeronautical operations around the airport was met by placing the control room (cab) in an elevated and predominant position of the airport (control tower).

To date, the first steps in designing a control tower involve establishing its site and the height of the cab. Internationally, to meet the viewing requirements from the cab, the recommendations of the Federal Aviation Administration (FAA) are applied. The optimum height and location of a control tower is the result of weighing up many considerations. The view from the cab requires the air traffic controller to be able to distinguish the aircraft and vehicles that circulate in the manoeuvring area, as well as aircraft that fly over the airport, particularly in take-off and landing paths. The objective is to have the maximum visibility possible and avoid the sun, external light sources and reflections from adjacent buildings affecting the visibility of the controller.

With regard to the location, we must consider the potential effects of local weather: flood areas or areas susceptible to fog. Its compatibility with the potential future development of the airport must also be studied, thereby avoiding the need to relocate the tower before the end of its life cycle. Insofar as possible, the tower and its buildings should be located on the landside of the airport, thus avoiding access through the airfield and facilitating the entry of staff. Furthermore, the location should be such that it does not affect the quality of the signals of the airport’s radio navigation aids (ILS, VOR, DME, etc.), or communication systems. The minimum height required for the control tower can be obtained with the aid of the FAA visibility analysis tool, ATCTVAT (Airport Traffic Control Tower Visibility Analysis Tool), in accordance with the physical conditions of the airport.

Once the position and height has been determined, the infrastructure is designed, and generally includes a cab and an antenna field, which, located on the roof of the cab, normally has communications antennas, radio relays, and other electronic and lightening protection elements. Furthermore, there are areas for staff, equipment, power, air conditioning, etc.

In an era in which technology provides information to pilots to allow a practically blind landing, is it necessary to keep air traffic controllers in a high position so they can see these operations? In the future, air traffic control rooms will probably be in buildings that are more similar to those of offices or air traffic control centres than the current towers.

The future has already become reality

Recently, Örnsköldsvik airport in Sweden replaced its control tower with high-tech cameras. Signals are sent to controllers stationed in Sunvsal airport, located around 150 kilometres away, from a 25-metre mast with 14 high-definition cameras. The high performance of these cameras eliminates blind spots, provides information in rain, fog or snow and, along with a whole series of weather sensors, microphones and other devices, it allows controllers to feel as if they were beside the runway. The Swedish Transport Agency approved remotely operated towers on 31 October 2014. Six months later, the first airplane landed in Örnsköldsvik airport using the remote tower services.

Previous Article Passengers give the "thumbs up" to the Atlantic Axis 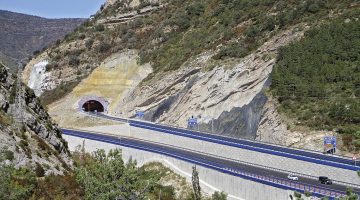 The highway that tamed the mountain