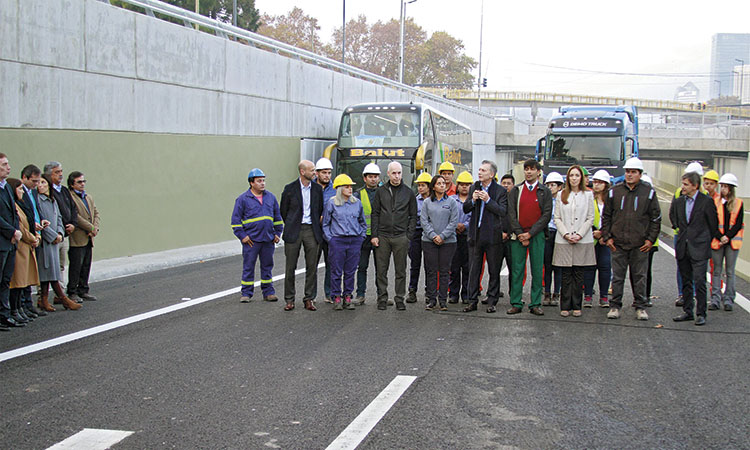 On 27 May, the Paseo del Bajo opened to traffic in front of a large audience. Speakers at the ceremony included the Argentine president, Mauricio Macri (in the centre), the head of government of the Autonomous City of Buenos Aires, Horacio Rodríguez Larreta, and the governor of the province, María Eugenia Vidal.

According to the municipal government, more than 134,000 residents of Buenos Aires benefit directly from the Paseo del Bajo, a new 7.1 kilometre road corridor that opened in May and crosses the city from north to south, connecting the Buenos Aires-La Plata and Illia highways. It has a total of 12 lanes, four of which run in the semi-depressed central road section (trench) that is exclusively for heavy vehicles and operates as a highway: according to the Buenos Aires Department of Urban Development and Transport, every day more than 15,300 lorries weighing 12 tonnes or more and more than 800 coaches travel this section.

The rest of the traffic –which consists of approximately 76,000 private vehicles per day and public transport– uses the eight surface lanes located on both sides of the trench, four on each side (two in each direction), on Avenidas Alicia Moureau and Huergo. The left-hand lanes are designed for through traffic and cars are not allowed to stop. The project also included the construction of nine bridges along the Paseo to connect both sides of the road and 60,000 m2 of green areas, bicycle lanes and a large pedestrian stairway by the Puente de la Mujer bridge, which connects Plaza de Mayo to the Puerto Madero district of the city.

Beginning in 2017, Ineco, together with its local partner AC&A, carried out inspection work for AUSA (Autopistas Urbanas SA) on the new infrastructure’s section B, the ‘southern semi-covered trench,’ which was opened to traffic on 27 May after several days of events and in an atmosphere of celebration: it was a project that was long-awaited by the three million inhabitants of the Argentine capital, which, together with its metropolitan area, has a population of around 12 million people.

It is one of the most important civil works projects in the country and, thanks to it, travel time has been reduced from 50 to 10 minutes

It is one of the most important civil works projects in the country and, thanks to it, travel time has been reduced from 50 minutes to 10 minutes. The new road enables cargo traffic to travel from the Buenos Aires-La Plata highway, cross the city centre without having to stop for traffic lights and directly access the port and Retiro bus terminal.

Next post Opening of the AVE high-speed line to Granada

Previous Article Ineco to assist Swedavia in a ORAT department 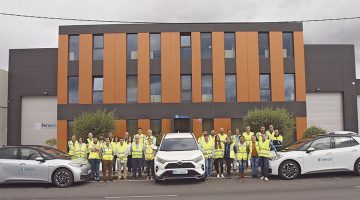