Control on the ground to keep things flowing in the air

At large airports, having an Apron Management Service or AMS to guide aircraft on the ground reduces the workload of controllers and improves operational efficiency. Ineco has conducted a study to implement an AMS at Colombia’s El Dorado airport. 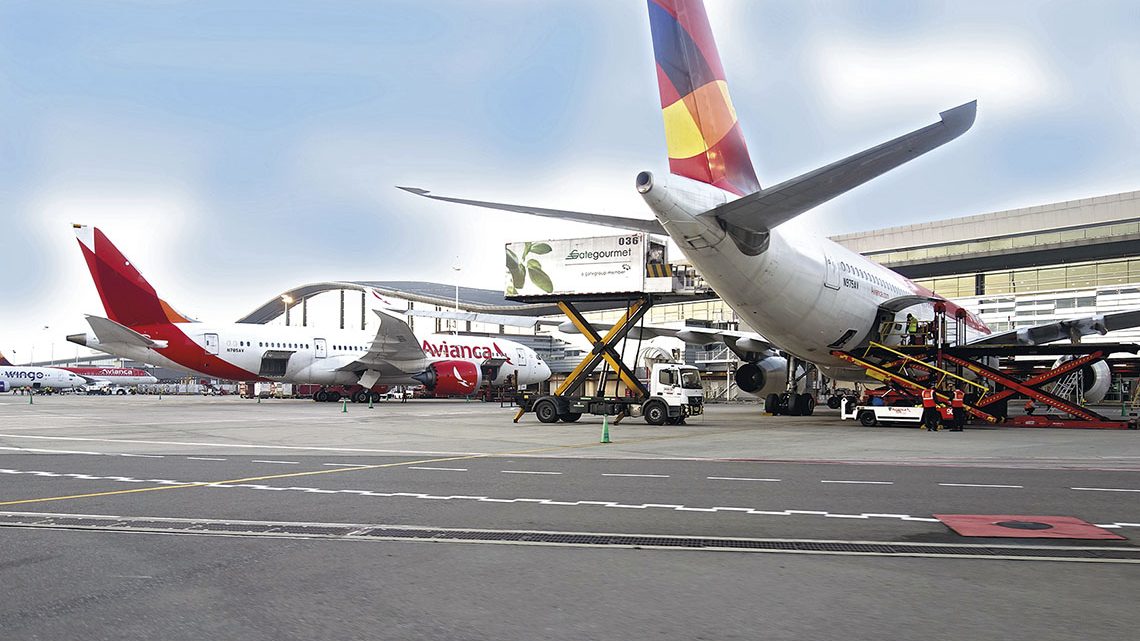 El Dorado international airport in Bogotá, Colombia, is one of the most important airports in Latin America: it is the third largest in terms of passenger volume, with more than 35 million passengers per year, the second largest in terms of operations, with 315,000 flights, and the largest in terms of the volume of air cargo transported, with around 725,000 tonnes per year, according to 2019 data from the Civil Aeronautics Air Transport office. Expansion plans underway to meet the increase in traffic expected by 2030 include the implementation of an Apron Management Service, or AMS, to improve efficiency and reduce ground movement delays.

Ineco, together with the Colombian engineering company Integral, has carried out the technical, operational, administrative and cost studies for Aerocivil, the Colombian aeronautical authority, to develop and implement an AMS at El Dorado, the first of its kind in the country. To this end, the different possibilities for its implementation and the conditions for the tendering and contracting of the service by Aerocivil have been analysed.

An AMS is an airport service that is specifically dedicated to managing and securing the movement of vehicles and aircraft on aprons. The International Civil Aviation Organisation (ICAO) recommends the implementation of an AMS when warranted by traffic volume and operating conditions. In Spain, its implementation was gradually introduced, starting in 2011, in airports with an annual traffic of over 250,000 flights, such as Madrid and Barcelona. Until 2017, Ineco was in charge of the transition and provision of the service in Madrid for Aena and provided support to Enaire in Barcelona, where the service was handled by control staff. 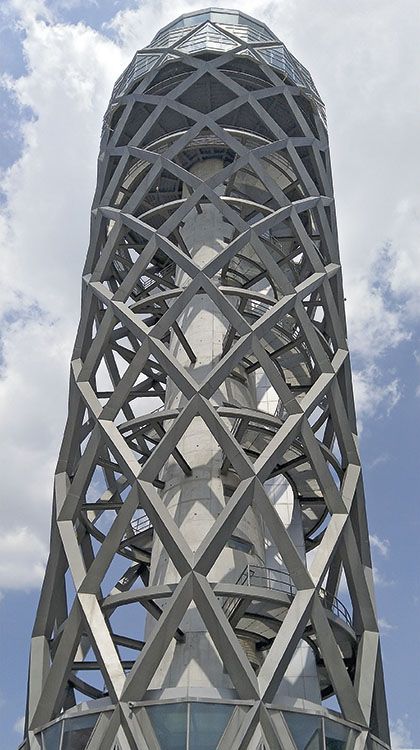 MONITORING FROM THE TOWER. It is proposed that the future AMS facility be physically located on the first floor of the control tower. In 2011, Ineco and the Spanish architecture firm GOP were commissioned to study, design and outfit the new tower. / PHOTO_INECO-AEROCIVIL

At the international level, different AMS models exist in Canada, China, Japan and the United Arab Emirates. In the United States, the system is implemented at major airports such as JFK in New York, Chicago and Las Vegas; and in Europe, at Madrid-Barajas, Barcelona-El Prat, Frankfurt, Amsterdam-Schiphol, Munich and Zurich airports.

In Colombia, the Apron Management Service at all airports is carried out through coordinated management between the air traffic services (ATS), the aerodrome administration and the airlines. Specifically, in the case of El Dorado International Airport, the control tower is currently responsible for regulating movement between aprons, controlling the entry of aircraft and ensuring the rapid and safe movement of vehicles, among other activities.

Assigning these functions to an AMS unit will reduce the workload of ground controllers (GND), enabling them to better manage taxiing on the manoeuvring area. The increased specialisation of the AMS in the management of taxiing and reversing on aprons will also help to improve operational fluidity and efficiency. 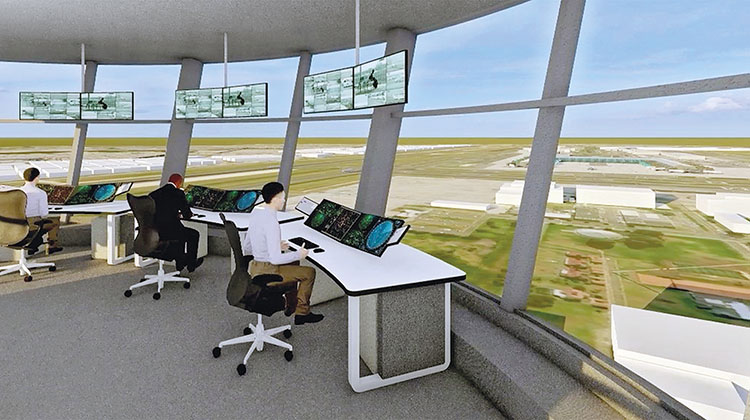 Operational positions of the AMS: in the centre, the supervisor and on both sides, the operators.

The implementation of the AMS does not necessarily require major investments in new infrastructure, equipment or technology, since the same infrastructures are used as those employed by tower control. In the case of El Dorado, it is proposed to physically locate the service on the first floor of the new control tower. In 2011, Ineco and the Spanish architecture firm GOP were commissioned to study, design and outfit the new tower (see ITRANSPORTE 46).

Thus, the proposal, developed in coordination with Aerocivil’s Directorate of Telecommunications and Air Navigation Aids, will not require major adaptation works, apart from the upgrading of the electrical system and the radio transmitter centre, as well as the establishment of intermediate waiting points on the airfield to identify the traffic transfer points between the control tower and the AMS. Cameras (CCTV) will be installed at the non-visible points of the commercial aprons (T1, T2 and TC), which are the responsibility of the AMS, an area that has been divided into two sectors: north and south. The service will also be supported by an A-SMGCS (Advanced Surface Movement Guidance and Control System), which automatically alerts and resolves potential aircraft and vehicle conflicts regardless of weather conditions), which is being deployed at El Dorado. 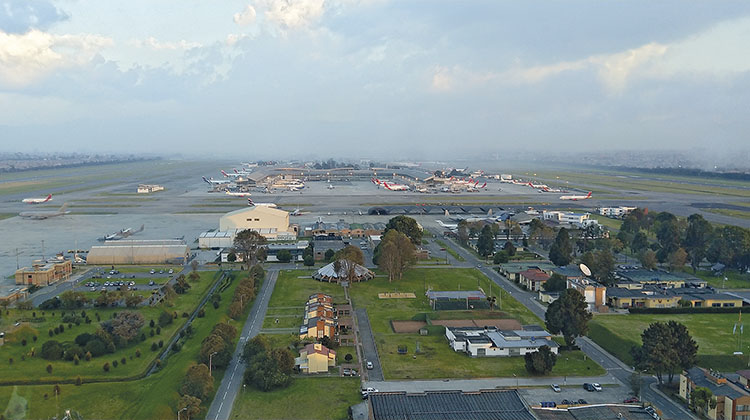 A new AMS-specific CCTV system will be installed on the apron to ensure the availability of cameras in areas not directly visible from the tower. / PHOTO_INECO-AEROCIVIL

This project was developed through the structuring and scope established in the terms of reference defined jointly with the GPA and the Directorate of Air Navigation Services of the Colombian Civil Aeronautics.

Ineco’s multidisciplinary team carried out a field visit and around fifty working groups with the different stakeholders involved throughout the three phases of the project:

Diagnosis of the current situation

The first step was to gather all available information on the airport’s equipment, procedures, infrastructure, operations and human resources, as well as applicable national and international standards and recommendations. The operation of more than 4,000 flights was also sampled for the months of December 2019 to March 2020.

In addition, a benchmarking study of three international airports with an AMS –Madrid-Barajas, Amsterdam-Schiphol and Frankfurt – was carried out to assess implementation alternatives and the AMS model best suited to the needs of El Dorado. Among other conclusions drawn from this comparative analysis were the weight of staff training –between three months and one year, depending on the airport– in service start-up times, the improvement in operational efficiency and costs, and the maintenance of safety levels, since AMS operators receive specific training and provide pilots with exactly the same information and instructions as controllers. 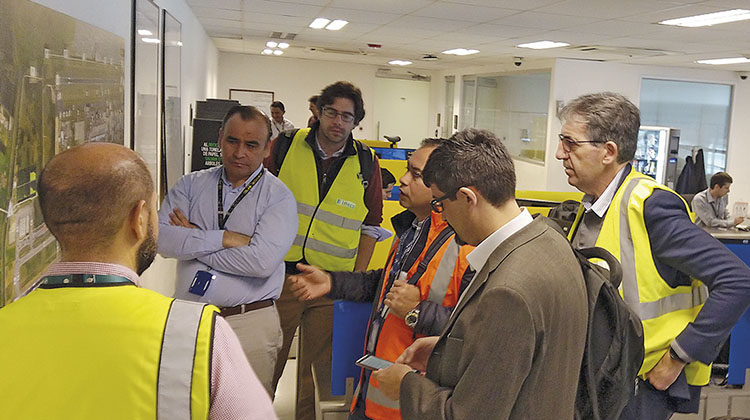 A snapshot of the information-gathering field visit, which also included the analysis of more than 4,000 flights.

Based on the conclusions of the diagnosis and the benchmarking study, up to six different service implementation alternatives were analysed to identify the most suitable for El Dorado. To this end, aspects such as the distribution of functions between the ATS and the AMS, the physical location of the service, the adaptation of the control and navigation systems (ATM, CNS and MET), the provision model (Aeronáutica Civil will evaluate the implementation model of the project based on the results of these studies), and the definition of the regulations: the establishment of specific conditions in the specifications or changes to the national regulations, the Colombian Aeronautical Regulations (CAR), which are considered the most appropriate.

The proposed functions to be assumed by the AMS at El Dorado airport, which until now were carried out by the control tower, include:

To this end, local coordination procedures (letters of agreement) have been developed, in coordination with Aerocivil air traffic control staff, covering those functions where responsibility is divided or coordination of the AMS with the
responsible party for the function, such as tower control or the airport manager, is required.

In terms of staffing, a team of six supervisors and 18 AMS operators, who will receive specific training, is proposed. For this, the Centre for Aeronautical Studies (CEA) of Aerocivil, which has developed a specific training programme for AMS personnel, has collaborated in this project.

A security analysis of the procedures and the implementation of the AMS has been carried out, as well as an implementation and operational cost study.

The proposed contract duration is six years (12 months of implementation and five years of service provision), which has been deemed the most appropriate period to balance the interests of Civil Aviation and at the same time make the tender attractive to a sufficient number of candidates.

Traffic control in the movement area

It is not only necessary to monitor and organise air traffic movements when aircraft are in the air, but also when they are on the ground, taxiing around the airport. All aircraft movements on the ground are managed by control personnel, or by AMS personnel if on aprons, where the safe and smooth coexistence of aircraft with all vehicles and personnel moving along the apron must be ensured. 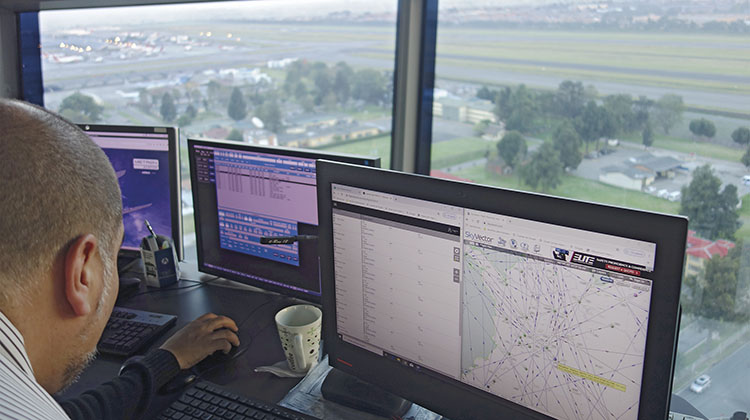 The AMS will reduce the tower control workload. / PHOTO_INECO-AEROCIVIL

In addition to the aircraft, there are a number of vehicles that operate in the movement area following strict safety protocols and procedures: tractors, which tow the aircraft from the assigned parking positions; follow me; service and supply (handling); fuel supply; loading and unloading of luggage and freights; and mobile stairway trucks and buses for embarking and disembarking passengers and crews. In addition, where appropriate, there are emergency and security vehicles (ambulance, fire brigade, civil protection, police, etc.), customs, cleaning and maintenance vehicles, customs, cleaning and maintenance. As a result, the movement area at busy airports, and in particular the aprons where aircraft are parked, can become congested. Ensuring that all aircraft and vehicle movements are carried out safely and smoothly is fundamental to the efficiency of airport operations, where every second counts. Hence, the International Civil Aviation Organisation (ICAO) regulations for airport design and operations provide for the possibility of traffic management on the apron to be entrusted to an apron management service (AMS) that is separate from the air traffic service (ATS), which is in charge of tower control. 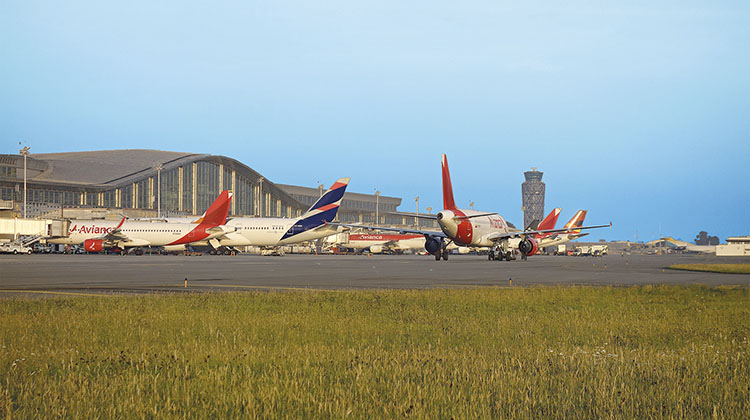 El Dorado apron with the control tower in the background. / PHOTO_INECO-AEROCIVIL

The functions and responsibilities of each must be perfectly defined and both services must be coordinated with each other, for which a protocol called ‘Letter of Agreement’ (LoA) is established, which specifies the areas of responsibility of each service, when, how and where control is transferred from one to the other (transfer points), the procedures to be followed in the event of Low Visibility Procedures (LVP), emergencies and contingencies, etc. 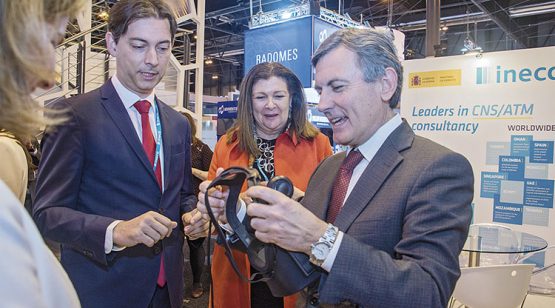