With the implementation of the new regulatory framework, Empresa de Ferrocarriles del Estado de Chile (EFE) is now on par with the world’s major railway companies. Nearly 50 Ineco experts participated in the development of this modern railway standard. 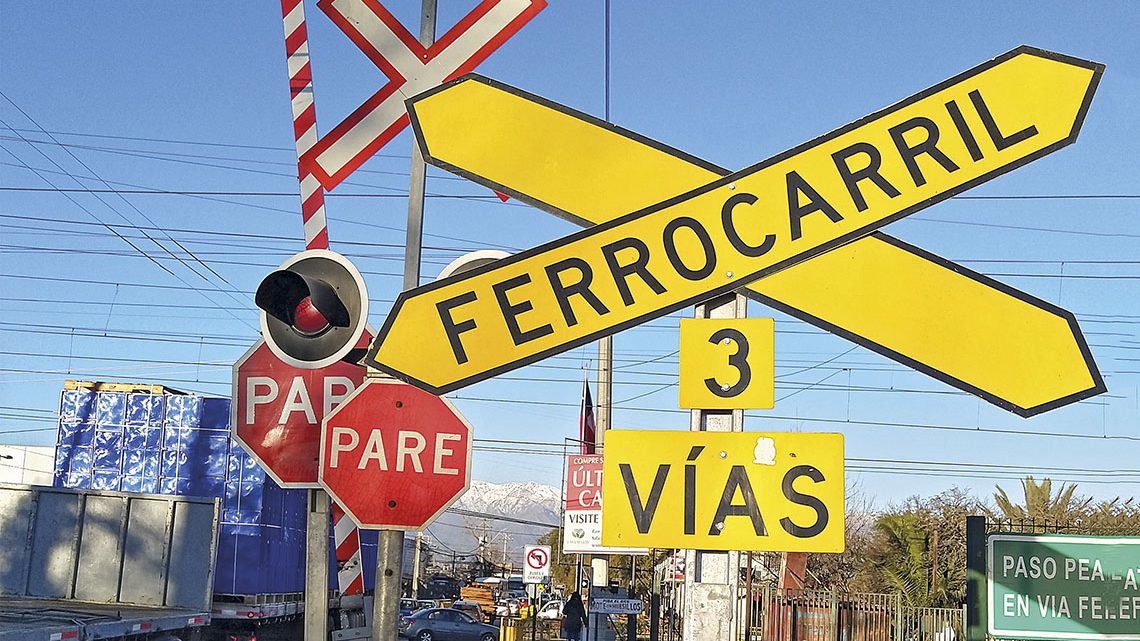 The Chilean government is taking a step forward towards modernisation and improved competitiveness, strengthening the country’s railway sector through the legal and regulatory development carried out by Ineco and Louis Berger (WSP). / PHOTO_INECO

The new technical railway regulations of the Chilean public company EFE, drafted by Ineco in consortium with Louis Berger (now WSP), with stakes of 80% and 20%, respectively, involves the development of a new technical regulatory framework to regulate the design, construction and maintenance of all the Chilean railway company’s assets.  The criteria include RAMS (reliability, availability, maintainability and safety) requirements, and cover all of the systems that make up railways: infrastructure, superstructure, signalling, electrification and communications; level crossings; stations and rolling stock for passengers, freight and auxiliary vehicles; and operation and maintenance.

In 2020, EFE’s Board of Directors approved a change to this new technical standard that will govern the conduct of all its suppliers and contractors moving forward. The project required the renewal and expansion from the 24 standards that existed in 2019 to the current 72 standards. The Chilean railway network is unique in that it incorporates both its own elements and European and North American technologies, which is why the drafting process was carried out based on both American and European regulations, taking into account current Chilean legislation, the current state of the infrastructure and routine operations of the EFE Group.

The development of the new regulation was a complex task, since it addresses new standards in all areas of railway activity: more than 50 professionals from Ineco and Louis Berger (WSP), from 15 different specialities, participated in the project over the course of a year. Meetings organised into 17 working groups were held, involving the coordination and input of more than 100 specialists from the EFE group and its subsidiaries: Tren Central, Metro Valparaíso, FESUR and FCALP.

From an operational point of view, the new framework will facilitate procurement processes, define maintenance contracts and make it possible to reduce costs. From a strategic point of view, it ensures greater national and international visibility and diversity in Chilean public procurement. 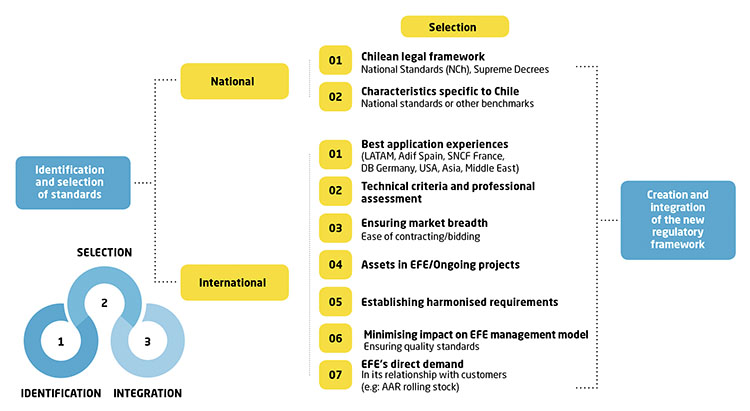 The methodology of the Ineco/Louis Berger (WSP) consulting team was based on defining a decision model and a formula for integrating standards in three stages: identification of the standard, selection of the standard and integration into the regulatory framework.

The EFE group manages a network of approximately 2,200 kilometres of track, providing long-distance, medium-distance and commuter services. The EFE network uses mostly a 1,676 mm gauge (very similar to Iberian gauge), with several 1,000 mm metric gauge sections on northern lines. The EFE group can be further subdivided into the parent company EFE (which is responsible for the administration of the infrastructure and exclusive freight lines) and the subsidiaries, which are responsible for the operation of the different passenger services:

Meanwhile, freight transport is provided by the private companies Fepasa and Transap.

72 standards across more than 15 specialities

The complexity of drafting all the regulations stems, to a large extent, from the wide variety of systems and proprietary architectures of the different EFE subsidiaries and their unification into one standard for each system.

To develop them, Ineco’s experts used general documentation, equipment and system specifications, inventory lists, meetings and visits to EFE’s facilities in Chile, as well as benchmarking to define the most appropriate international standards to be considered in each speciality. Thanks to the 17 work groups of Ineco, Louis Berger (WSP) and EFE and its subsidiaries, a diagnosis was made, standardisation needs and requirements were identified, and, lastly, standards were drafted for validation by the EFE group. 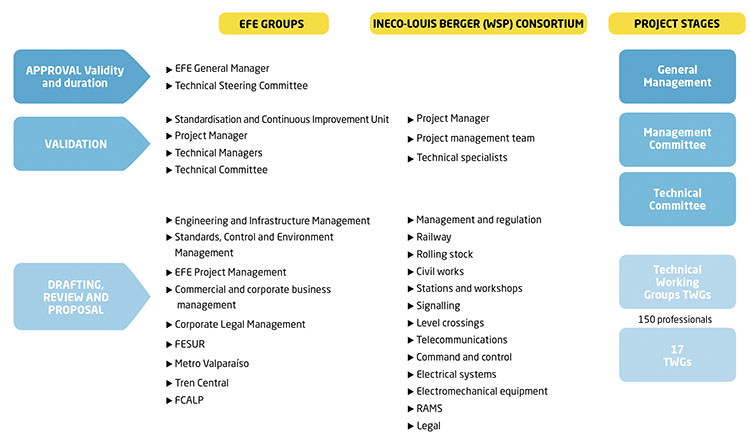 The standards will serve as a basis for tenders and will provide EFE technicians with tools to meet the challenges arising from the modernisation of the railway sector in Chile.

The voice of the experts in…

Track: Ineco’s track specialists participated in the review and drafting of 12 technical standards for the design, construction and maintenance of the superstructure. In this area, says Francisco Javier García, six standards were drafted to regulate important aspects such as the criteria for the design and construction of the track superstructure, as well as the supply of track elements (ballast, sleepers, anchors, etc.). A specific standard for maintenance work was also included.

Level crossings: Both at vehicle and pedestrian level crossings, Amador Quintana highlights EFE Chile’s sensitivity to the protection of level crossing users and universal accessibility to these installations. He also noted that it was right to base its approach on well developed European regulations on level crossings and to focus on proper maintenance, which is key to ensuring safety.

Civil works: The civil works speciality includes railway platform works, which are divided into separate packages: bridges, tunnels, cuts and embankments, works of art, crossings and parallelism, drainage and enclosures. Javier Rodríguez and Ricardo Rico, of Louis Berger (WSP) highlight the joint effort that went into the development of the new regulatory framework through the working groups formed by EFE and consortium specialists. This has made it possible to integrate the expertise of the EFE network, the country’s experience and international best practices into the new standards.

Most of the standards were newly created, as in the case for tunnels, which include aspects of design, construction and maintenance to address the management of EFE’s network, which has more than 30 tunnels in operation, some of which are quite old and with a variety of different tunnel types.

In the case of bridges, EFE already had a regulatory framework that had been in place since 2006. More than 12 years after their creation, these standards were updated, including standards to facilitate the maintenance, operation and inspection of bridges.

Stations: In the development of the technical standard for stations, Chilean national decrees and manuals were used as a reference, although, as Beatriz Asensio, points out, when deemed necessary, international documents were used, such as the US Transit Capacity and Quality of Service Manual. Chapter 10: Station Capacity. In total, four standards were developed for stations, covering construction elements, accessibility and safety, and three new standards for workshops.

Electromechanical equipment: In regard to this equipment, which includes lifts, escalators, forced ventilation and water pumps, among other components, Ángel Sánchez and Manuel Benedicto García highlight the obligation to comply with Chilean regulations, regardless of the fact that it was sometimes necessary to supplement them with EU regulations, such as Spanish UNE standards. In some cases, the presence of US standards was more noticeable, as in the case of fire protection systems in buildings, since much of this equipment is developed in the US. 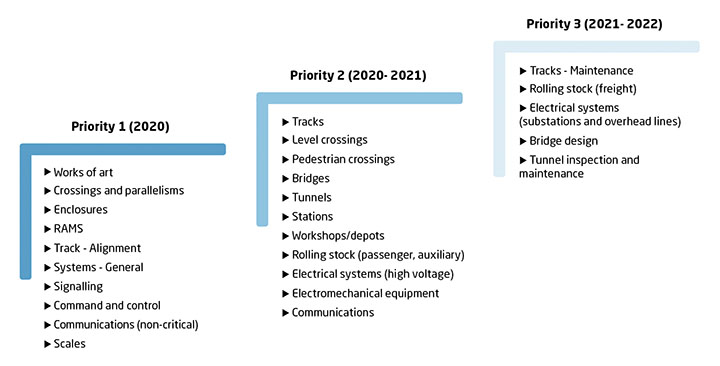 As the graph shows, the new policy framework was developed through an AS-IS/TO-BE (‘where we are and where we want to be’) approach. The implementation plan developed by Ineco and Louis Berger (WSP) defined how to gradually implement the new set of standards.

Electrification: Seven regulations were developed for the design, construction and maintenance of the entire traction power supply structure, consisting of high-voltage lines, electrical substations and overhead lines. In all of these projects, says Jaime Peñalba, regulations were adapted to the existing energy supply system and in some of them, in addition to Chilean and international regulations, Ineco’s experience was a key factor.

Signalling: As José Antonio Jiménez points out, within the speciality of signalling, which includes the interlocking, blocking, signalling, train detection and protection, and track device operation systems, it was necessary to draw up new technical standards based on the international standards already tested, which will represent a positive step forward in EFE’s railway network, improving operability and increasing safety.

Command and control: For command and control systems, standards were developed not only for railway systems, but also for control centre operators. Ineco also developed regulations on the ergonomic standards that furniture and equipment must comply with in order to reduce risk caused by human error. According to Ángel García Luengo, a common videographic representation has also been developed in synoptics, videowalls, SCADAs, etc., so that the operator can clearly identify the elements on which to operate.

Land-based telecommunications: Standards were applied for each of the systems: video surveillance, access control and anti-intrusion access, administrative and operational telephone systems and passenger information and sound systems. Rafael Gutiérrez explains that the standard was developed for the radiocommunications systems that implement both the CSV (Virtual Signalling System) and the TKBC (weighbridge toll system), the complexity of which lies in the different technologies incorporated into it, such as:  NXDN (UHF/VHF-based open standard for public land mobile radio systems), GNSS (global navigation satellite system), AEI/RFID (automatic equipment identification/radio frequency identification), MMOO (microwave), public operator mobile networks and SATCOM (satellite communications) for communications between driver/vehicle and the Telecommunications Control Centre and/or Centralised Control Centre.

Information Technology (IT): In this area, Antonio Urbez stresses that consultancy work was carried out proposing international regulations affecting IT in two fundamental aspects: governance and means of payment, with the proposal to introduce international regulations such as ISO 14443 (standard related to cards and electronic security devices for personnel identification).

RAMS: Standards were drawn up for the application of requirements for the recently created RAMS department within EFE, applying, according to Tatiana Rueda, the CENELEC, EN-50126, 50128, 50129 standards, a global benchmark.

Rolling stock: Due to the requirements of the rolling stock running on the EFE network, Álvaro Jiménez Mellado highlights the development of a set of ad hoc, standards, with criteria and requirements from North American standards for freight rolling stock, and European and North American standards for passenger trains (locomotives, coaches, etc.). These rules will make it easier for EFE to put the new equipment into service and will serve as a basis for international tenders for the purchase of new trains.

With the development of the new technical regulations, the Chilean authorities are seeking to boost operational productivity and efficient management of the railway infrastructure, with the aim of investing more than five billion dollars by 2027 through the ‘Chile on rails’ plan. The plan looks to triple the current passenger demand to 150 million, double freight to 21 million tonnes and renew of the entire fleet with new trains. The main strategic projects included in the plan are:

The standards will serve as the basis for tenders for new railway sections of EFE and its subsidiaries. 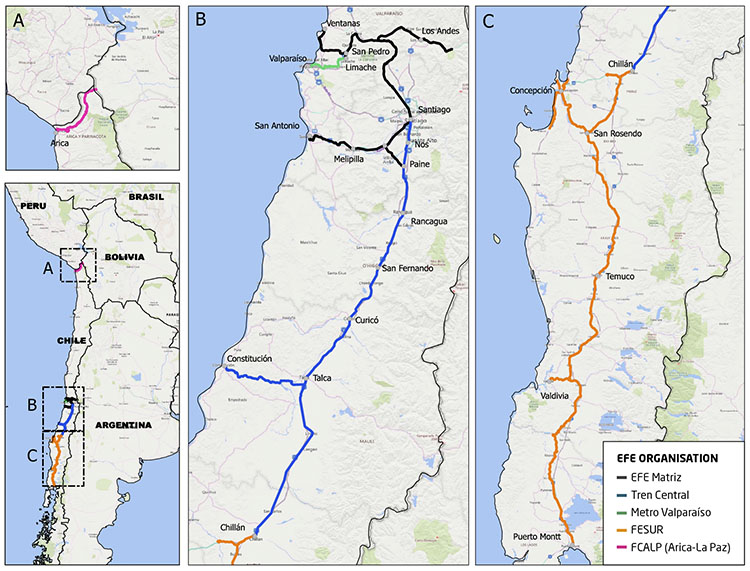 The diagnostic work was carried out with representatives of all the sectors involved through online processes and with teams from Ineco and Louis Berger (WSP) travelling to EFE’s facilities in Chile.

The study also involved meetings in 17 regulatory working groups with more than 100 specialists from the EFE group and its subsidiaries. 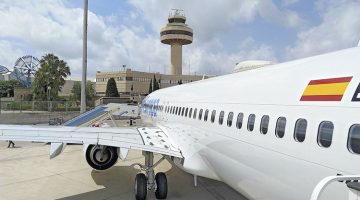