From China to São Paulo

Ineco is carrying out technical assistance and supervision on the eight new 2500 series trains that the company CRRC Sifang is manufacturing in Qingdao, China, for the São Paulo Metropolitan Railway Company (CPTM). The work is being carried out by the Consorcio Supervisor 8 Trenes (CS8T), which is made up of Ineco, Ineco do Brasil, Ebei and MetroEng. 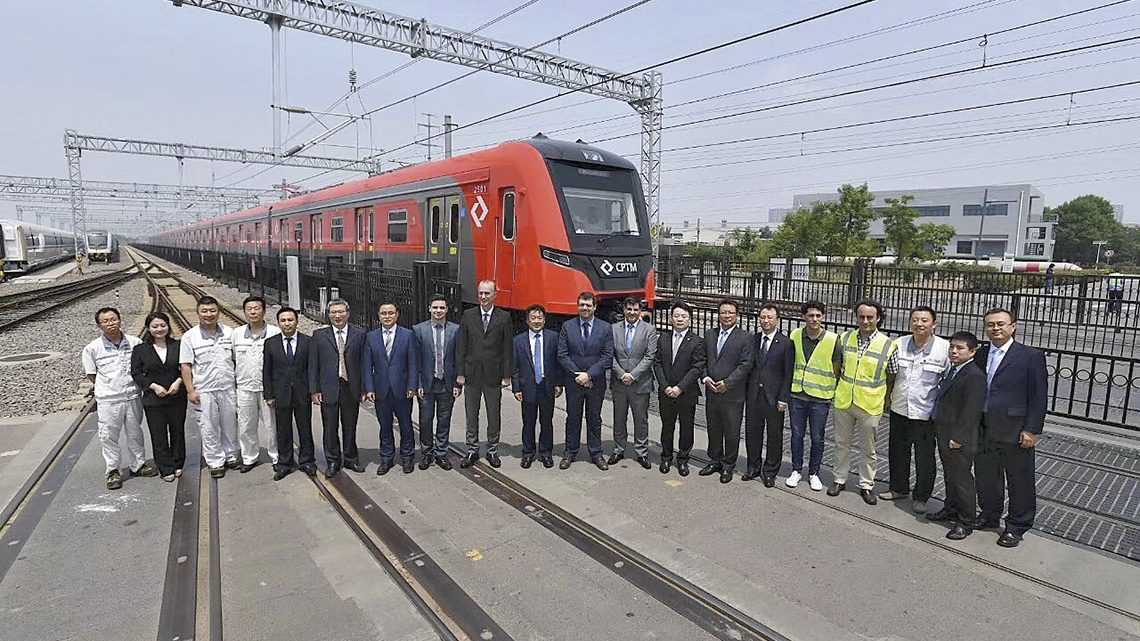 Presentation of the first train of the 2500 series manufactured in the facilities of CRRC Sifang (China), for CPTM. / PHOTO_INECO

The São Paulo Metropolitan Railway Company CPTM, a company linked to the Secretariat of Metropolitan Transport of the State of São Paulo (STM), is continuing with its project to expand the city’s Line 13, known as Jade, a 12.2-kilometre route that will connect the city centre with Guarulhos International Airport and is expected to carry 130,000 passengers every weekday. The Chinese-Brazilian consortium Temoinsa-Sifang is manufacturing eight new trains for this line which are specially designed with extra space for transporting the luggage of future users. The manufacture in China and the delivery and assembly of the trains is being carried out under the supervision of the CS8T Spanish-Brazilian consortium made up of Ineco, Ineco do Brasil, EBEI and MetroEng.

The rolling stock, which is being manufactured at CRRC Sifang’s facilities, was purchased by the State Government of São Paulo in September 2017 for 316.7 million reales with 85 million euros of financing from the European Investment Bank (EIB). With each train equipped with eight carriages, this fleet will provide shuttle services between São Paulo’s International Airport, the largest in Latin America, and the city of São Paulo.

In January 2019, a team of Ineco technicians travelled to the facilities of CRRC Sifang –a public railway manufacturer based in Qingdao, China– to oversee the delivery of the first train in the 2500 series. The rolling stock is very much in line with the latest acquisitions of STM/CPTM, which feature distributed traction and steel boxes, and complementing the recent deliveries of 30 Hyundai trains and 35 trains from the Spanish company CAF, both also financed by the EIB. This will give CPTM a more modern and versatile fleet, which will be put into service over the next two years. After disembarking at the Port of Santos, the new rolling stock is transported by road to CPTM’s facilities for dynamic track testing.

The assembly of the eight trains in CRRC Sifang’s factory is slated for completion in the first months of 2020, and CPTM will then continue with the acceptance and commissioning of the vehicles, which must be completed by the beginning of 2022.

The work of the CS8T Consortium includes reviewing the vehicle design and supervising static and dynamic testing, which will be ongoing both at the factory and on the track until the trains are put into service. To this end, Ineco technicians are carrying out manufacturing inspection activities at CRRC Sifang’s facilities and static and dynamic testing both at the factory in Qingdao and at CPTM’s facilities in Presidente Altino, São Paulo. A team of technicians from Ineco has also carried out a design review from its offices in Spain.

The supervisors have to make sure from the outset that the assembled rolling stock meets the technical specifications and needs of CPTM. They also need to have a detailed knowledge of international and Brazilian railway regulations, as well as the regulations that apply to each of the main and auxiliary elements of the structure –boxes, axles, wheels, etc.– equipment and systems: traction, braking, train safety, passenger information, driving, emergency, etc. The supervision process must guarantee reliability and the technical compatibility of all elements.

Ineco has extensive expertise in this field, as well as professionals with specific knowledge of each of the components that make it possible for a train to operate safely and comfortably for users. This experience extends to all varieties of rolling stock from all suppliers: Alstom, Bombardier, CAF, Siemens, etc.