Since July 2021, Sol multimodal station has been connected to the recently renovated Gran Vía metro station via a pedestrian tunnel. Ineco drew up the commissioning plan and supervised the works for this underground connection, which serves 22,000 users every day in the heart of the Spanish capital. 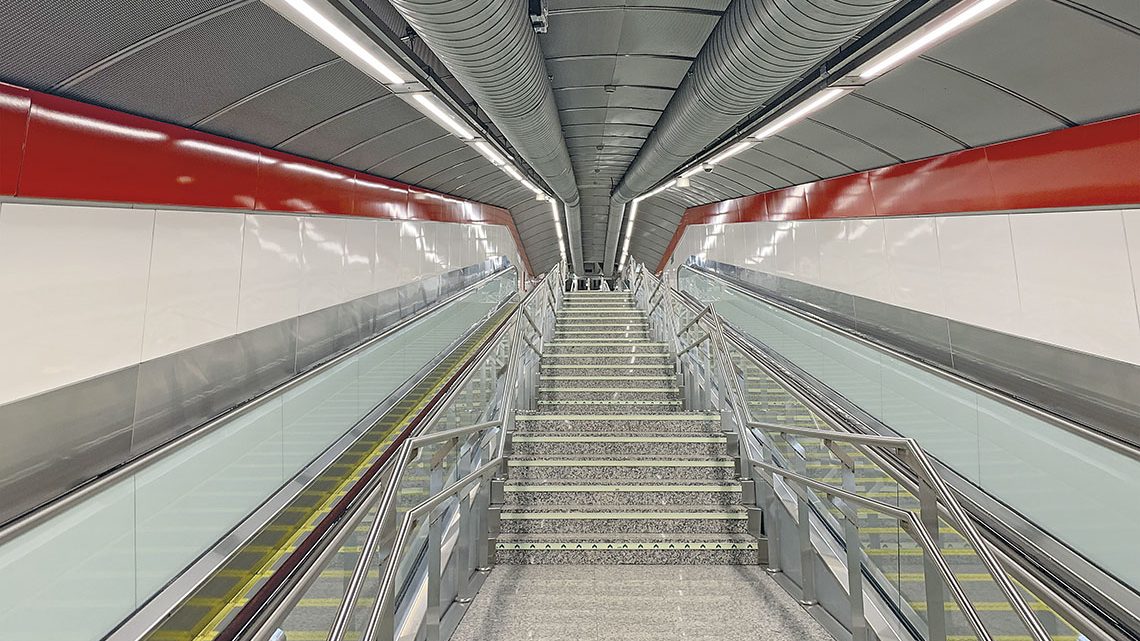 The image shows the completed 100-metre tunnel: the concrete structure has been clad in panels made from vandal-proof material and fitted with lighting, ventilation, fire-fighting and passenger information systems

For a city like Madrid and its metropolitan area, which is home to 7.3 million people and constitutes Spain’s largest conurbation, underground infrastructure such as the metro, commuter trains, walkways and transfer stations play a vital role in ensuring that the transport system is able to flow. Without them, there would be insufficient space at surface level to absorb the volume of passengers. The metro alone carries 677 million people per year, according to data for 2019.

Of the 300-plus stations in the network, Sol is the busiest by a significant distance, with 24.4 million passengers in 2019. And that is not its only record: it is also the oldest station, as it was the starting-point of the city’s first metro line, Sol-Cuatro Caminos, which opened in 1919. Following major extension work in 2009, Sol boasts the world’s largest station cavern, measuring over 200 metres long by 20 metres wide and 15 metres high.

TUNNEL INCLINE. The image is a cross-section of the tunnel, showing the 12-metre incline between Sol commuter station and Gran Vía metro station. Accessibility is provided by four moving walkways.

After this expansion, which followed the entry into service of the new tunnel between the two major railway stations of Atocha (to the south) and Chamartín (to the north), Sol was reopened as a transfer station, with access to three metro lines and two commuter lines (located at the deepest level). Here, at the end of the vast station cavern, a pedestrian tunnel was built in order to provide a link to another of Madrid’s historic stations, Gran Vía, located a little over 100 metres away beneath Montera street. After the initial structure was built, the tunnel remained closed while work was carried out on the metro and commuter branch lines.

Working on behalf of Adif, Ineco drew up the plans and supervised the work to prepare the tunnel for its entry into service. Work began in 2018 and recommenced in early 2021, while the Community of Madrid finalised the expansion of Gran Vía station. Work on the two projects was coordinated, and both facilities were opened at the same time in July 2021. The new pedestrian tunnel will increase the flow of passengers to a station that already ranks among the busiest. Madrid Metro estimates that the station will receive an additional 22,000 users per day, in addition to the 44,000 who already do so.

Key characteristics of a deep-lying site

In 2009, during the renovation of Sol station, the tunnel was bored out and a series of arched reinforced concrete sections installed, totalling 120 metres long by 5.7 metres wide. The route runs parallel to Calle Montera, above the railway tunnel, and ascends by approximately 12 metres on its way towards Gran Vía.

The plan drawn up by Ineco in 2018 detailed all of the actions required to make the tunnel operational: clad the concrete walls with vandal-proof materials; install all of the systems for lighting, ventilation, security, fire-fighting, communications, signalling, access control and ticket machines at the entrance to Gran Vía station; and install four large moving walkways to overcome the incline. Adif also commissioned Ineco to provide site management services and coordinate health and safety for the construction work, which was carried out by Tragsa.

As well as coordination with other major projects that were undergoing implementation, these works had the added complexity of being carried out 20 metres underground. Not only that, but they were done while Sol station remained fully operational. Consequently, in order to transport the moving walkways (which were originally going to be brought from Gran Vía), draisines –track-based transport vehicles (1)– were used to carry the walkways to the platforms in sections (2). There, they were hoisted up to the mezzanine (the intermediate floor above the platforms, where the tunnel is located) using a block and tackle system (3), and then transferred into the tunnel using rolling platforms (4 and 5) and placed inside the excavated pits (6). These operations required meticulous planning and great precision in order to avoid damaging the station, and were carried out at night so that they did not interfere with normal operation.

Another notable innovation is that, owing to its unique layout and design, the tunnel can be used as an evacuation route in the event of an emergency. In coordination with Renfe, Adif and the Madrid Metro, evacuation signalling has been installed in accordance with a specially designed and coordinated fire-protection and ventilation system, which means the tunnel can be used in a number of different emergency scenarios depending on where the emergency originates.

Gran Vía is one of Madrid’s most iconic and recognisable thoroughfares. In urban planning terms, its construction between 1910 and 1931 represented Madrid’s first significant step towards becoming a major European city. The road’s construction also occurred in parallel to the development of the metro system and other infrastructure and amenities throughout the city. Until its refurbishment in 1970, the entrance to Gran Vía metro station (which was initially called Red de San Luis) was covered by an Art Deco pavilion designed by the Galician architect Antonio Palacios, who also –alongside Joaquín Otamendi– designed some of the city’s other iconic buildings, such as Cibeles Palace in the plaza of the same name, and the Círculo de Bellas Artes cultural centre. This pavilion was subsequently moved to the architect’s birthplace of Porriño (Pontevedra), where it remains to this day. An exact replica, echoing the architectural harmony of the surrounding area, was built for the new station. At the same time, the station’s fully accessible interior was enlarged and fitted with modern systems and equipment.

The works in detail

ON THE STATION’S MEZZANINE FLOOR 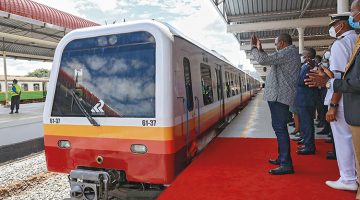