The project to adapt the Astigarraga-Irún line to the international track gauge with the installation of a third rail involves complex adaptation of all aspects of the existing line. This is particularly the case with the Gaintxurizketa tunnel, where an innovative tunnel boring machine, specially designed to allow trains to pass through, is playing a key role in the works. For the works on this line, ADIF has commissioned a team of Ineco engineers and technicians to undertake the project, management and technical assistance. 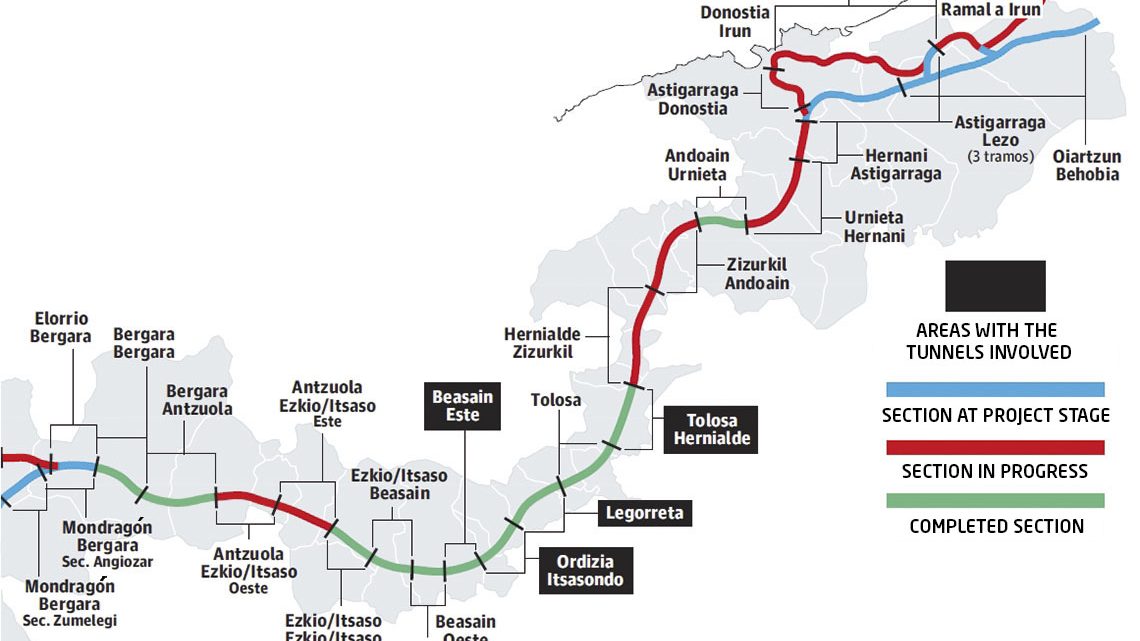 The works to install a third rail on the Astigarraga-Irún stretch in Guipúzcoa will make it possible to extend the ‘Basque Y’ –the future high-speed line between Vitoria, Bilbao and San Sebastián– to the French border via the Madrid-Hendaya national gauge line.

The Basque Regional government and the Ministry of Public Works, through the Monitoring and Coordination Commission for the Construction of the New Railway Network in the Basque Country, agreed to accelerate the entry into service of the different stretches that make up this network in the area around San Sebastián. With this objective, at the end of 2011, it was decided to install a third rail on the national-gauge line between Astigarraga and Irún to enable high-speed trains to use the new infrastructure, make commercial stops in the centre of San Sebastián, at Atocha station and continue on to Irún and France without the need to perform reversing or gauge-switching manoeuvres.

The works executed by Adif, in which Ineco is participating, include actions on the infrastructure, track, catenary and safety systems along the 20-kilometre route, with the adaptation of tunnels, metal bridges, stations and stops for mixed traffic situations taking on special significance.

The works executed by ADIF and Ineco include actions on the infrastructure, track, catenary and safety systems

The installation of a third rail in a conventional, so-called ‘old’, network with a completely urban track layout is a complex task that encompasses all of the structural and technical aspects of the railway line. The most challenging action though is undoubtedly that of enlarging the three tunnels on the Astigarraga-Irún stretch (Gaintxurizqueta, Loyola and Capuchinos) in order to comply with the values established in the Railway Gauge Instruction. The return to rail freight transport involves the use of intermodal transportation and the need for increasingly wider gauges on infrastructures that date back to the nineteenth century. Although these have been adapted over time, a major overhaul is now necessary in order to meet the new requirements. This represents a widespread problem for railway networks that must be addressed. In order to minimize disruption of rail services, Ineco has used a new construction system that has been implemented over recent years in Europe and introduced it in Spain. It involves making tunnel widening, excavation and new support placement work compatible with the passing of trains over an interior central track. This also has the added complexity of allowing trains to run on an electrified track. Some of the 17 technicians in front of the 535.5 metre Gaintxurizketa tunnel.

To this end, Ineco technicians from all specialisations have designed a provisional arrangement that makes the widening machine compatible with the 3,000 V overhead lines.

The development of a prototype for Spain

The German firm Herrenknecht, a company with extensive international experience in the development of tunnel boring machines, has been in charge of adapting and developing its prototype to the current needs of the tunnels on the Astigarraga-Irún line.

Model TES D-835 consists of 4 modules, each with a different function (shield, excavation and shotcrete, pipe umbrella drilling and auxiliary facilities) that are assembled together. This model was designed to allow it to be used in other geological areas and to widen tunnels up to 2 metres.

The progress of the ‘Basque Y’

The infrastructure of the high-speed rail connection that will link the three provincial capitals of Euskadi with France and the rest of the Iberian Peninsula is currently being executed. The ‘Basque Y’ is a 180.5 kilometre railway line –not including access routes to cities– which will connect the capitals of the three provinces of the Basque Region, Vitoria (Álava), San Sebastián (Guipúzcoa) and Bilbao (Vizcaya), by means of a high-speed network. It connects with the rest of the Iberian Peninsula and France, via Pamplona, through the Navarre Corridor and allows the Madrid-Valladolid-Vitoria line to be extended to the French border.

This line consists of two different branches: Vitoria-Bilbao, 90.8 kilometres, and Bergara-San Sebastián-French border, 89.7 kilometres. It will have six stations: Astigarraga, Bilbao-Abando, Vitoria, Irún, San Sebastián-Norte and Ezkio-Itsaso. The mountainous geography of the region has required the construction of 44 viaducts and 23 tunnels.

INECO part of a comprehensive action

Ineco has provided its services to Adif at all stages of the Astigarraga-Irún project. In December 2012, it drafted the functional project for Adif to integrate the Astigarraga-Irún stretch into the Basque Country’s new railway network, which includes the infrastructure, energy, control, command and signalling subsystems. In the design and planning phase, the construction projects for the entire stretch were drafted: track assembly, overhead contact line and associated systems, facilities and signalling control points, train protection systems, CTC, auxiliary detection systems, fixed telecommunications and security systems.

In the construction phase, the company’s experts are carrying out site management of the track, signalling and telecommunications and technical assistance and monitoring and supervision of the work of all specialisations. Their functions include qualitative, geometric and quantitative controls, budgetary monitoring with study of deviations, monitoring of work schedules, document control, issuance of reports, etc. Other companies executing the works include COPROSA (infrastructure and track), the Electren-Elecnor consortium (overhead contact line) and the Siemens-CAF Signalling consortium (safety and communication systems).

The minister of Public Works, Iñigo de la Serna, on his first visit in February 2017, oversaw the start of these works, which will cost more than 160 million euros, including construction and supplies. Several months later, in September, he inspected the operation of the construction system and the possibilities it offers for adapting the network to the new needs of rolling highways. Previous Article Routes to the future 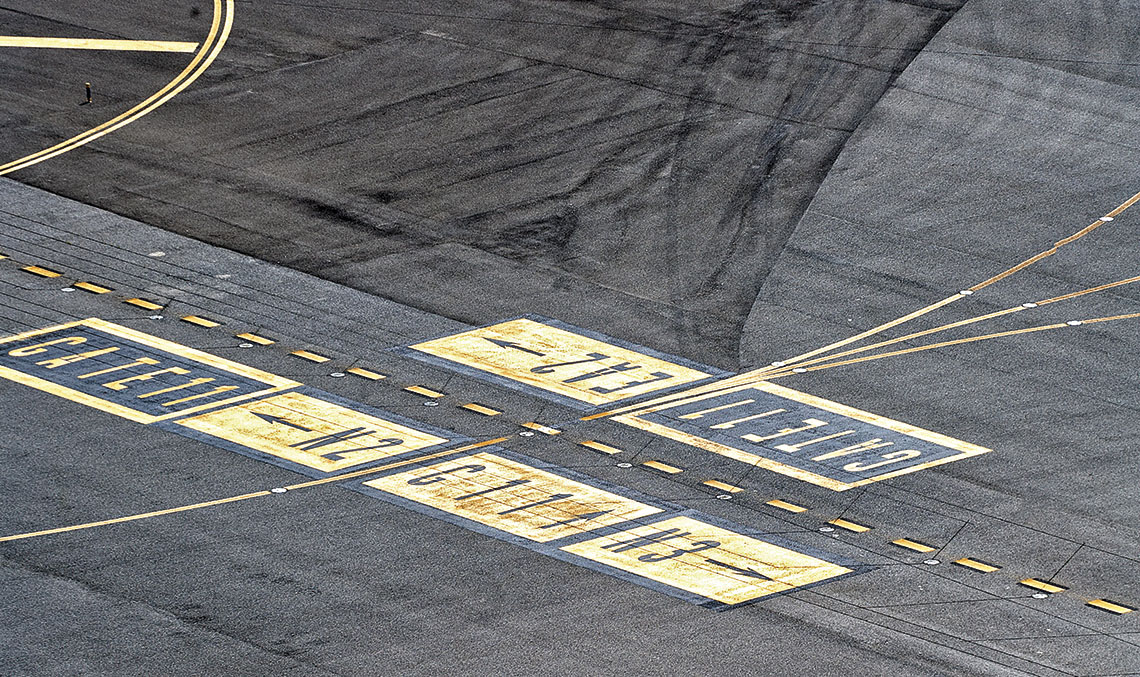