The new passenger terminal at Kuwait International Airport (KIA) will feature a state-of-the-art design with the highest environmental certification: LEED Gold accreditation will make KIA a model and benchmark for other airport buildings. 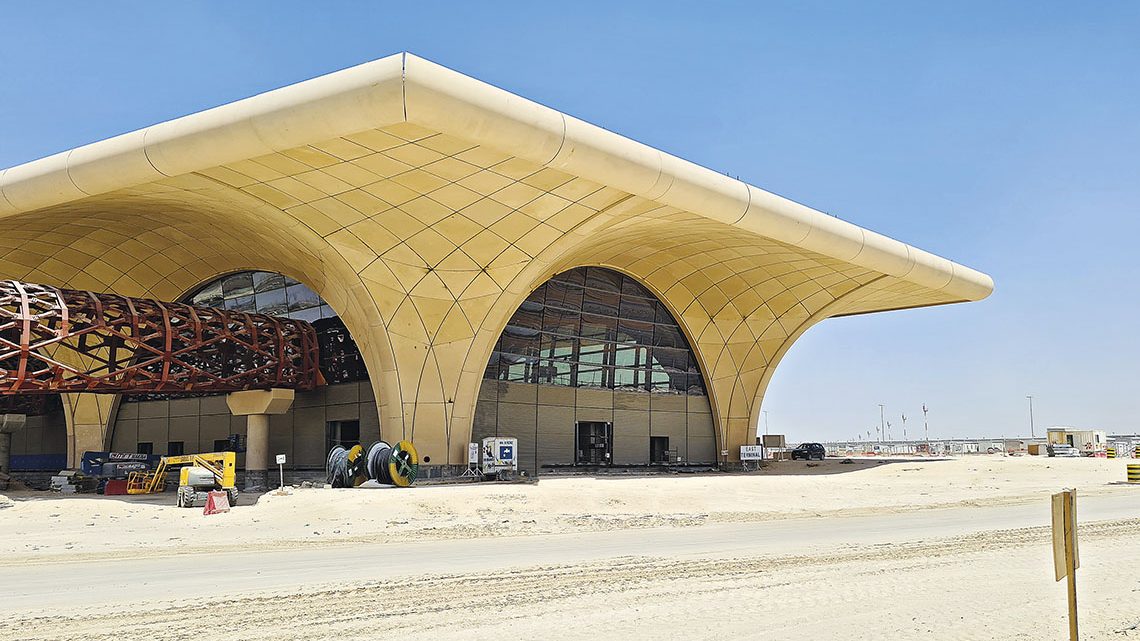 The new KIA terminal is a state-of-the-art infrastructure, an environmental benchmark for airport buildings. / PHOTO_MPW (MINISTRY OF PUBLIC WORKS)

Obtaining LEED certification for the new passenger terminal at Kuwait International Airport (KIA) was a project requirement proposed by the Kuwait Ministry of Public Works and designers Foster + Partners. This LEED certification is promoted by the US non-governmental organisation USGBC (United States Green Building Council), which awards the final certificate to the building upon completion of the independent review of the entire project documentation. The London-based architectural firm was commissioned to design the project in accordance with these sustainability strategies. Subsequently, the Turkish construction company Limak, winner of the construction competition, is executing the design in accordance with the best construction practices required by the certification.

The project aims to generate at least 10% of the energy consumed inside, and reduces overall consumption by 27% compared to a reference building

Ineco is providing project management services for the three work packages into which the project has been divided, aimed at significantly increasing the country’s passenger transit capacity, and establishing a new hub in the Persian Gulf. The project consists of a state-of-the-art infrastructure, which will set a new environmental benchmark for airport buildings. Its design responds to the local climate, one of the warmest inhabited environments on earth, and is inspired by local building shapes and materials.

The passenger terminal has a floor plan with three symmetrical wings, where each façade is 1.2 kilometres long, all extending from a spectacular 25-metre-high central space. The project aims to achieve LEED Gold certification for environmental design, and to being one of the largest passenger terminals in the world to do this. 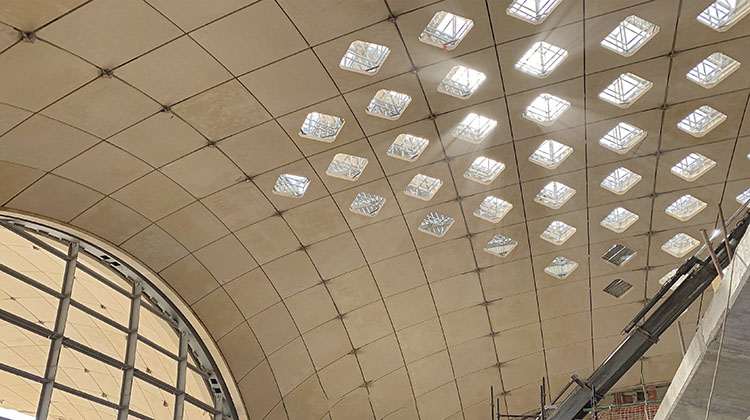 Energy consumption is optimised through efficient mechanical systems, from lighting to air conditioning. Pictured here is a detail of the 8,000 skylights on the roof that maximise natural light. / PHOTO_MPW (MINISTRY OF PUBLIC WORKS)

LEED certification, which stands for Leader in Energy Efficiency and Sustainable Design, means that the building or project to which it refers is built according to eco-efficiency standards and meets sustainability requirements. This certification is voluntary and rewards the use of sustainable strategies in all the building’s construction processes, through a design aimed at maximising energy efficiency, water savings, waste reduction and the use of sustainable materials, as well as optimising the health and well-being of the terminal’s occupants and visitors. 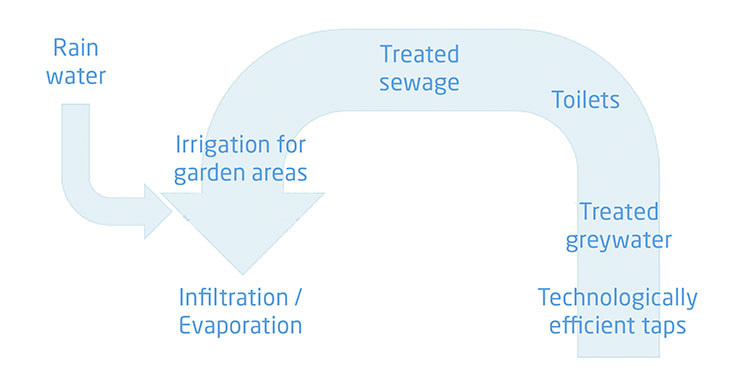 INTEGRATED WATER CYCLE. In Terminal 2, potable water consumption will be reduced by 45% through the use of low-flow taps and the reuse of grey water.

Total potable water consumption will be reduced by 45% through the use of low-flow taps and the reuse of grey water.

The project has been designed to reduce its impact on the environment by minimising the ‘heat island effect’, which is a rise in temperature in cities caused by an increase in impermeable and heat-absorbing surfaces such as concrete and asphalt. This effect can be reduced by providing a green roof over the parking building and an oasis at the entrance to the terminal that welcomes passengers with a microclimate several degrees below the surrounding environment. All landscaped areas have been designed with native species and/or those adapted to Kuwait’s desert climate, incorporating light, heat-rejecting materials in the exterior cladding and canopies.

The building’s thermal envelope includes a roof structure with an air gap with high thermal inertia and a glazed façade that is shaded by a 60-metre cantilever. This reduces the thermal gains that must be abated by the air conditioning system, reducing energy consumption while improving the thermal comfort inside the terminal.

Natural light is maximised through the 8,000 skylights incorporated into the roof design, and energy consumption is optimised through efficient mechanical systems, from lighting to air conditioning.

The roof incorporates 81,444 photovoltaic panels with an installed peak power of 29.4 MWp that will generate 49.98 GWh annually, representing 10% of the total energy consumed by the building. This is the largest photovoltaic installation in an airport terminal.

Thanks to this and other energy efficiency measures, the project manages to reduce overall energy consumption by 27% compared to a reference building designed under the ASHRAE 90.1-2007 standard, according to energy calculations made by the US consultancy firm The Spinnaker Group.

Total potable water consumption will be reduced by 45% through the use of low-flow taps and the reuse of grey water collected from sinks for toilet flushing. Water from the toilets is treated and reused to irrigate the landscaped areas, thus completing the integral water cycle and reducing by 100% the potable water needed for irrigation. Materials in Terminal 2 have been specifically selected so that a significant proportion of them contain recycled or rapidly renewable materials from regional suppliers, aiming to reduce the use of finite resources by 20% and minimising transport distances. To ensure a healthy indoor environment, building materials such as paints, sealants and adhesives have been specifically selected with a low level of VOCs (Volatile Organic Compounds), while air conditioning systems have been designed to increase outdoor air ventilation rates by 30%.

View of the floor plan of the new terminal divided into three packages.

Finally, construction sites often produce large amounts of solid waste, increasing the burden on dwindling landfills and causing soil, water and air pollution. In the construction of Terminal 2, the aim is to recycle, reuse or donate at least 75% of the waste produced on site.