The new railway line that connects A Coruña to Santiago and Vigo has set a record for regional rail lines in Spain by exceeding three million passengers over the past year. From the beginning, Ineco has worked on this infrastructure which has breathed new life into rail transport in Galicia. 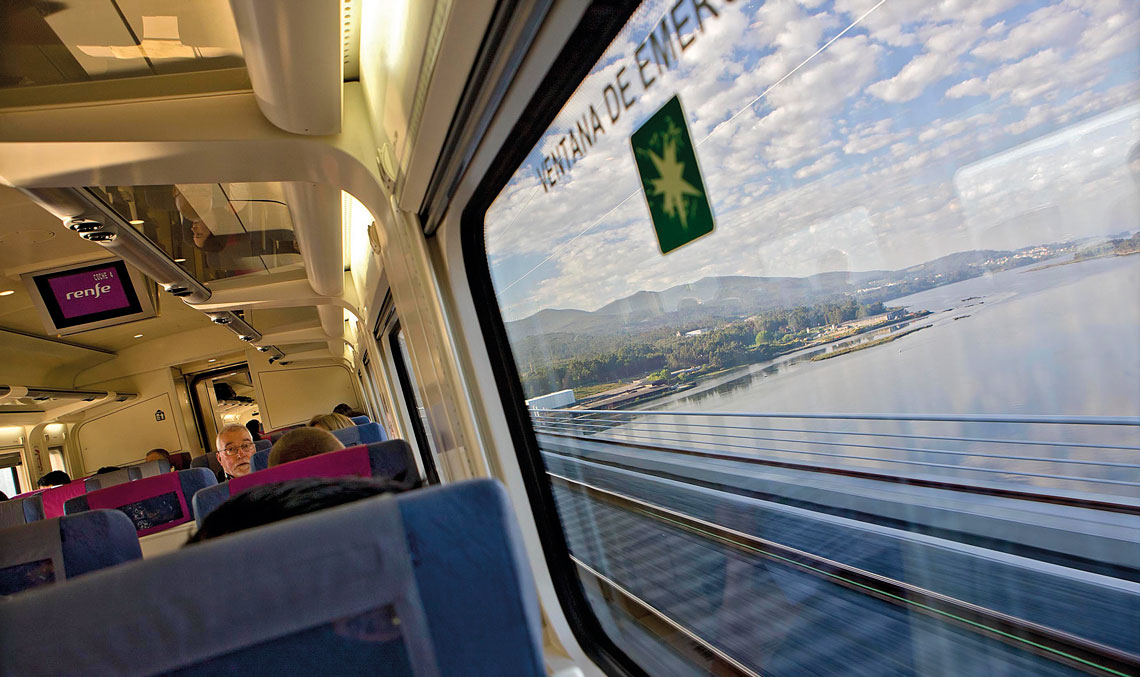 RECORD NUMBER OF PASSENGERS. With more than three million travellers in 2015, according to data from the Ministry of Public Works, passengers have given the ‘thumbs up’ to the Atlantic Axis, a railway infrastructure designed for speeds of up to 250 km/h. / PHOTO_ RENFE OPERADORA

With more than three million travellers in 2015, according to data from the Ministry of Public Works, passengers have given the ‘thumbs up’ to the Atlantic Axis, a railway infrastructure designed for speeds of up to 250 km/h. The renovation, electrification and duplication of existing routes in addition to the construction of new bypasses and several viaducts, bridges and tunnels have made it possible to transition from the old, non-electrified single tracks to high-performance rail infrastructure: greater speeds, capacity, safety, frequency and comfort for passengers who save up to 58% in travel time. In addition to making renovations to the rolling stock, Renfe has also maintained fares and reorganised rail services which are now divided into “express” and “local” services to cover direct routes between large cities as well as between the urban centres near these cities.

Ineco collaborated in the execution of these projects which have revitalised railway transport in Galicia. According to data from the Railway Observatory of the Ministry of Public Works, the A Coruña-Santiago route is one of the top five regional rail lines for traffic in all of Spain. The Businessmen’s Association of Galicia (Círculo de Empresarios de Galicia) considers that the growth in traffic along this route –a growth of more than 90% between 2008 and 2013– is “a fact that must be directly attributed to the improvement in infrastructure and the implementation of a high-performance rail line on this route of the Atlantic Axis”.

In April 2015 the Santiago de Compostela-Vigo section was inaugurated –the third of the three sections that make up the majority of this route which represents a milestone in the modernisation of the Galician railway. The territory of this region is characterised by a great dispersion of populated areas: few big cities –concentrated in costal areas–, many small, isolated areas –especially inland– and very rugged terrain. In addition to these characteristics we can also mention the natural geographical barriers that separate Galicia from the Meseta –barriers that have historically stood in the way of constructing land transport infrastructures, both road and rail.

The Axis, spanning 155 kilometres, runs along Galicia’s Atlantic Coast and connects the main areas of industrial and economic activity as well as universities, areas which fuel the demand for transport. The pre-study phase is already underway for the connections A Coruña-Ferrol (63.2 km) to the north of the Axis, in addition to Vigo-Border of Portugal (22.1 km) in the far south of Galicia. The route also connects Santiago with Ourense in the east where this section links up with the high-speed access route to Madrid which is currently under construction.

Initial work on the transformation of existing infrastructure into a modern, high-performance, rapid railway corridor began in 2002. Work was carried out in phases and consisted in installing, along the entire route, a double track with multi-purpose sleepers that will later allow for the change from the Iberian gauge to the standard gauge. The line has also been electrified to 25 kV at 50 Hz, and bypasses have been constructed which have shortened the route by almost 22 kilometres. New sections of the line, owing to the land’s rugged terrain, required several structures: 37 tunnels –totalling a distance of more than 60 kilometres– and 32 viaducts that span a total of 14.9 kilometres. The majority of these structures are located along the section between Santiago and Vigo. This was the most complex part of the route to construct and was the last to begin operating, following both A Coruña-Santiago in 2009 and the Santiago-Ourense connection in December 2011.

In addition to the work concerning electrification, platforms and route corrections (bypasses), adapting the line to new, high speeds also required the remodelling of stations at A Coruña, Santiago de Compostela, Pontevedra, Uxes, Villagarcía de Arousa and Arcade-Apeadero, as well as the construction of new stations: Cerceda-Meirama, Ordes, Padrón-Barbanza, Redondela High Speed and Vigo-Urzáiz, as well as the “temporary” Vigo-Guixar station.

Ineco on the Atlantic Axis

Throughout these years, Ineco has offered their services to the Ministry of Public Works, Renfe and Adif in these highly technical and complex activities, just as they did for the rest of the rail network. Ineco was thus responsible for carrying out tasks regarding the management, coordination and surveillance of construction work, the environmental management of different sections along the whole of the Axis, and the drafting of architectural plans (stations) and railway installations (signalling, safety, telecommunications, etc.).The company also conducted a number of studies in addition to inspections and structural load tests, some as exceptional as that of the Ulla viaduct (see IT54)

Ineco furthermore provided assistance in the management and coordination of tunnel construction work, such as the Vigo access tunnel measuring 8,266 metres long which was carried out using tunnelling machinery, and in the installation of safety systems: electrical installations, ventilation, fire protection systems, etc..

Also worth mentioning in relation to architectural work is the drafting of the construction project for the Vigo-Guixar station which, starting in 2011, has operated as the sole station following demolition of the old building while the new terminal was constructed (in the same location). The Guixar station is a two-storey passenger building boasting 1,000 square metres of space, three platforms measuring 285, 165 and 100 metres long for long-distance and regional rail trains, parking, and bus and taxi stops. When the new Vigo-Urzáiz station began operating in 2015, the Ministry of Public Works decided to keep the Guixar station open to freight transport as well as to local trains.

With regard to new sections of the line, Ineco coordinated the construction of the Ordes bypass in the province of A Coruña, a section that, over a span of just 7.2 kilometres, required two tunnels and a handful of viaducts. The Vilagarcía-Padrón bypass located between Santiago and Vigo stands out for its complexity, reaching a length of 26.1 kilometres. The company provided technical assistance throughout the management of construction work as well as during the environmental management, control and surveillance of several subsections. The bypass was one of the corridor’s most complex sections with seven tunnels and a dozen viaducts, including one which crosses the Ulla river (spanning a distance of 16 kilometres) and another that crosses over the Sar river –the longest on the Axis- measuring 2.4 kilometres.

Ineco also played a role during each of the phases of development of another high-performance railway connection: the line which links the Atlantic Axis to Ourense from Santiago (see IT18 and 44). The company was highly involved in all of the stages of development of this 150-kilometre section of the line, from project drafting to drawing up operations and maintenance plans, as well as during the construction phases including construction and environmental management services, technical assistance, surveillance and coordination services, etc. Since it entered into service in December 2011, the Santiago-Ourense corridor has also contributed to improving railway connections with the Meseta by reducing existing conventional service travel time by 50 minutes.

STOPS: A Coruña–Santiago de Compostela–Vilagarcía de Arousa–Pontevedra and Vigo, and stops at the new stations of Padrón-Barbanza, Redondela AV and Arcade.

Source:Ministry of Public Works and Renfe