Ineco has updated the Master Development Plans for the period 2020-2034 for 12 airports belonging to the Pacific Airport Group (GAP), which is partly owned by Aena Internacional. Against a background of strong growth in the Mexican aviation market, these plans will allow airports, including Guadalajara, sufficient capacity to meet increased demand. 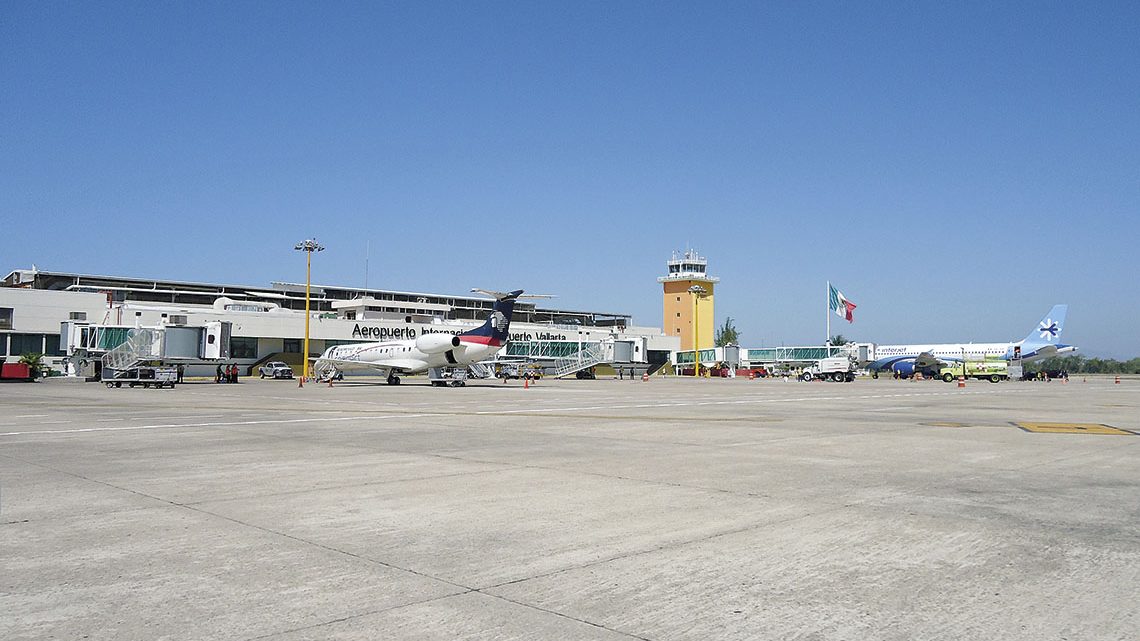 Air traffic at GAP airports has grown over the last five years by 12%, more than the country’s average of 8%. In the image, the Puerto Vallarta airport. PHOTO_INECO + GAP

The Mexican airports of Guadalajara, Tijuana, Los Cabos, Puerto Vallarta, Guanajuato, Hermosillo, La Paz, Mexicali, Morelia, Aguascalientes, Los Mochis and Manzanillo, all operated by GAP (the Pacific Airport Group), have just updated their Master Plans to 2034. Ineco first began preparing these plans, which are structured in three five-year phases, in 2003, for the periods 2005-2019, 2010-2024 and 2015-2029.

In an aviation market as dynamic as that of Mexico, it is essential to adjust plans to anticipated levels of demand.

In the last five years alone, Mexican air traffic has skyrocketed –with year-on-year growth of more than 10% until 2019, when it grew by 8.4%– due to several factors: the 35% drop in ticket prices due to the trade war between airlines, the drop in fuel prices, the signing of 23 bilateral transport agreements in just four years and the strength of tourism. Within this context, GAP operates five of the 10 busiest airports in the country, with the list topped by Mexico City, with 50.3 million passengers in 2019, and Cancun, with 25.5 million. The Guadalajara airport, with 14.8 million passengers, is in third place.

Air traffic growth at all GAP airports over the past five years, at 12%, is higher than the national average (8%), which is attributable to several factors: the saturation of the international airport in the capital, Mexico City (AICM), which has benefited Guadalajara airport, the cross-border effect at Tijuana airport, and the increase in tourism at the Rivera Nayarit and La Paz airports, which has benefited the Puerto Vallarta and La Paz airports.

Guadalajara is the largest airport, Puerto Vallarta, Los Cabos the most touristic and Tijuana is the main gateway to the US

The Guadalajara International Airport is the third most important in the country and is located in the state of Jalisco. Guadalajara is an important commercial, industrial and tourist centre. In line with the Master Plan, the main actions to be carried out in the coming years will be the construction of a second runway and a new terminal with its associated commercial apron. An increase in the capacity of the general aviation apron and the parking and access facilities is also proposed. 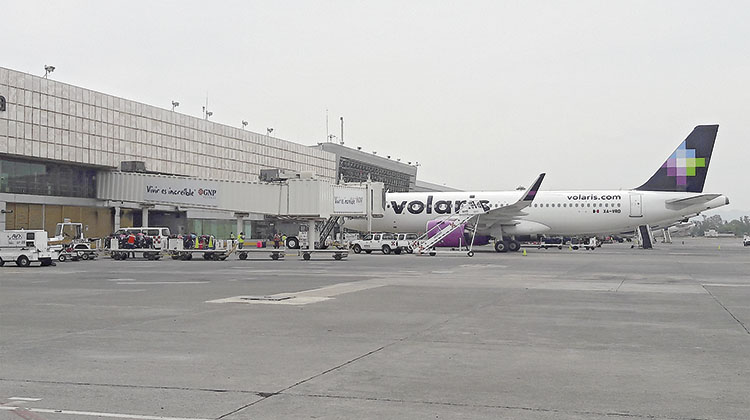 General Abelardo L. Rodríguez International Airport is located in Baja California, adjacent to the US border. Passengers departing from San Diego (USA) use the Cross Border Xpress (CBX), which allows them to cross the border without leaving the airport. The Tijuana Plan is currently underway, which includes the construction of a new processing building and the joining of the Alfa and Eco taxiways. The Master Plan aims, within the first five years, to reconfigure and expand the aircraft stands, as well as the security control area in the terminal building, and to reserve an area for cargo, in particular for CBX-Cargo. For the second five-year period, the construction of Dock C and a new control tower. 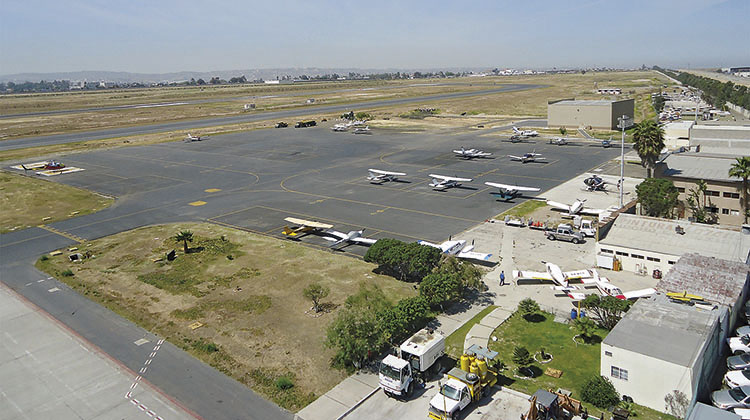 The airport serves the Los Cabos area –comprised of the municipalities of San Jose del Cabo and Cabo San Lucas– currently one of the most important tourist destinations in the country. 70% of the traffic is international. Among the key actions, the Master Plan proposes, in the short term, to expand the commercial and general aprons, as well as the terminal buildings. For the second five-year period, land is being reserved in the medium term for the construction of a future second runway. 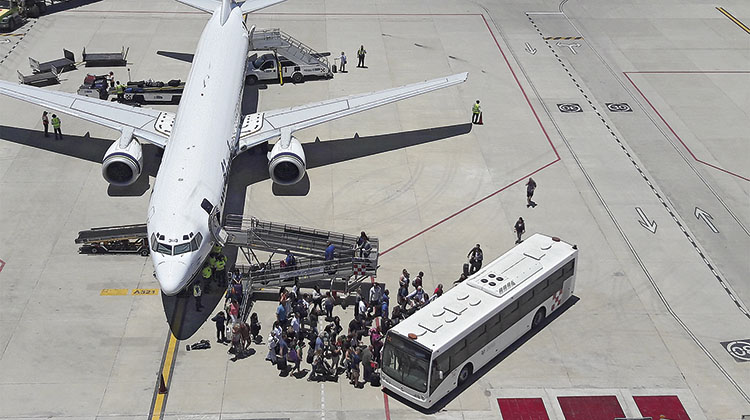 Located in the state of Jalisco, 7.5 kilometres northwest of the city of Puerto Vallarta. The main proposal of the Master Plan is the construction of a new terminal building with an associated apron, parking lots and roads, as well as a reform of the current terminal building. 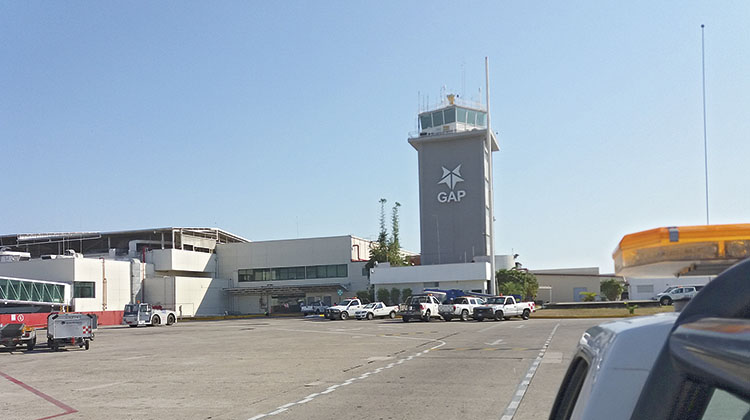 Located in the municipality of Silao (Guanajuato). With 2.7 million passengers in 2019, Guanajuato is the fifth largest city within GAP. In the last five years, average growth has been spectacular, at 15.5%, above the average of 12.1% for GAP. Commercial traffic is mostly domestic. The proposed development includes an expansion in several phases of different areas of the terminal building (departures, arrivals, baggage claim, new boarding gates), as well as the parking aprons (commercial and general aviation). 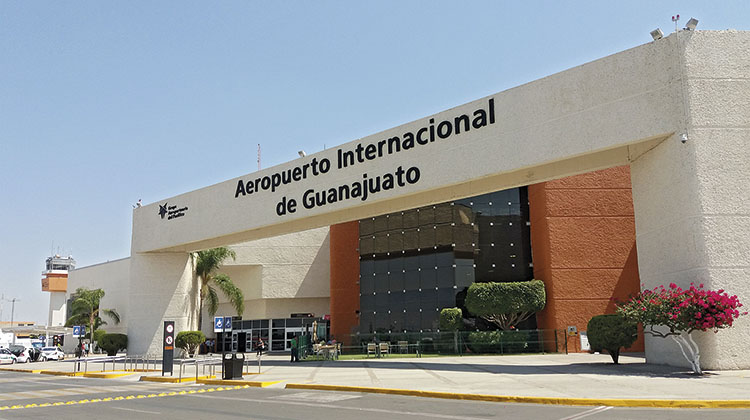 The airport is located in the municipality of Hermosillo, in the state of Sonora. It serves as an alternate airport to Tijuana. The main development proposals include the enlargement and reconfiguration, over several phases, of the stands on the general aviation apron and, in the short term, of the passenger and baggage claim areas. Also, the control tower is to be renovated, although it does not need to be relocated. 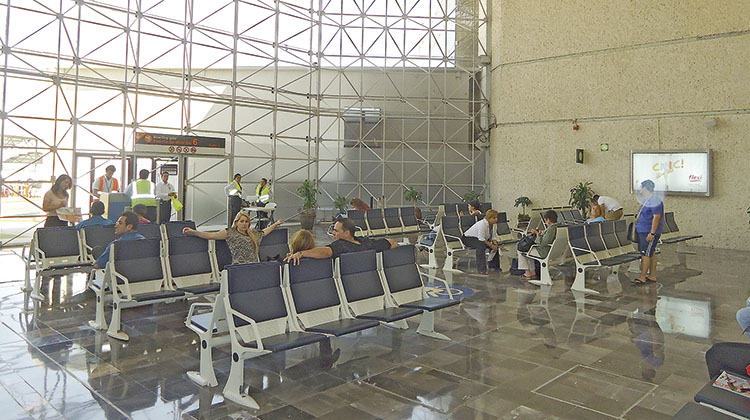 The General Manuel Márquez de León International Airport is located in the state of Baja California Sur. Almost 100% of passenger traffic and commercial operations are domestic. The Master Plan recommends, among other actions, the enlargement of customs, phytosanitary and documentation controls, in the short term; or, in the medium term, of the terminal building, the final waiting room and baggage claim. 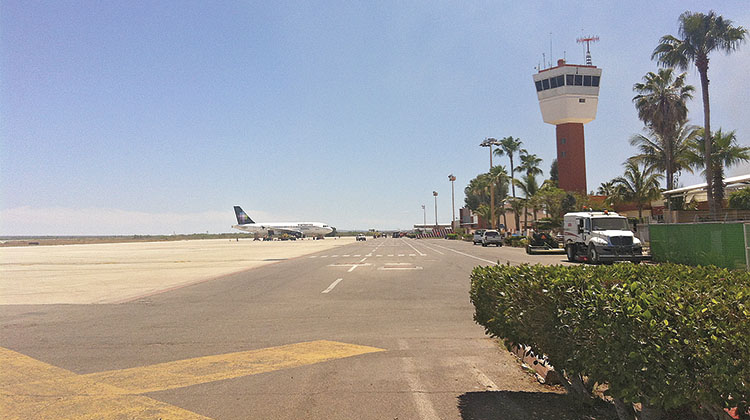 The General Rodolfo Sánchez Taboada International Airport is located in the state of Baja California, about 6.5 kilometres from the US border. Short-term development proposals include increasing the number of documentation counters, installing an X-ray machine and remodelling the general aviation building. 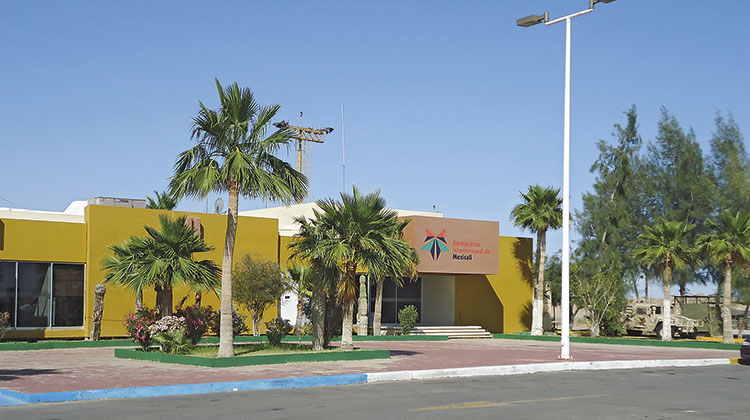 The airport is located 30 kilometres from the city of Morelia, in the north of the state of Michoacán. Following an analysis of demand, it was concluded that the airfield has sufficient capacity for the entire reference period. In the short term, proposed actions include, among others, the expansion of the general aviation apron, as well as the areas for document control, boarding and baggage claim rooms. 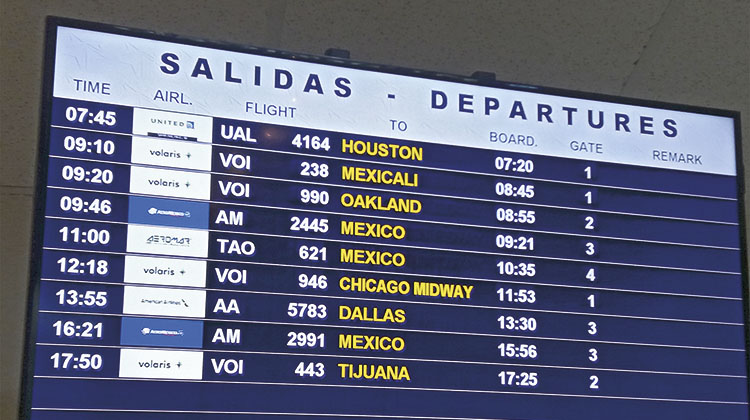 The Licenciado Jesús Terán Peredo International Airport is located 24 kilometres south of the city of Aguascalientes. Over the last five years, the average annual growth rate of commercial passengers has been 13.9%, well above the figures reported for the entire group. Among the actions of the Master Plan, it is worth highlighting that during the first five years, the commercial and general aprons were enlarged and remodelled, as well as the passenger area, in particular for baggage claim and document control, and some repairs were made to the beacon in the control tower. 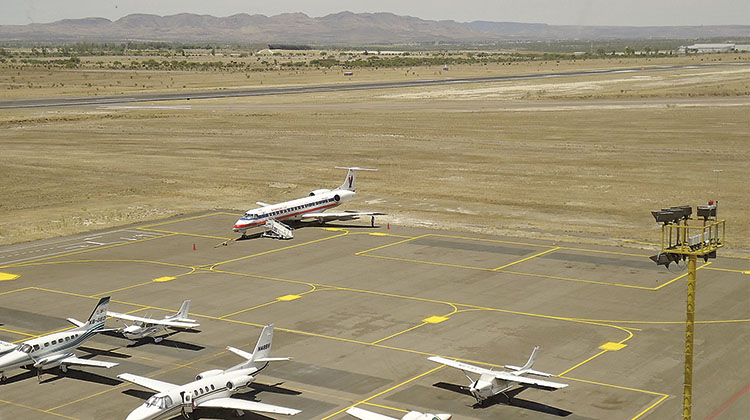 The Valle del Fuerte International Airport, or Los Mochis, is located in the state of Sinaloa. Its traffic is almost 100% domestic. The proximity of the airports of Hermosillo and Culiacán –both state capitals– results in competition that affects primarily the development of international traffic. As for the Master Plan, it proposes the remodeling and expansion of the south-west and south-east facades of the existing terminal building, the expansion of the general aviation apron and the reconfiguration of the current seating arrangements. 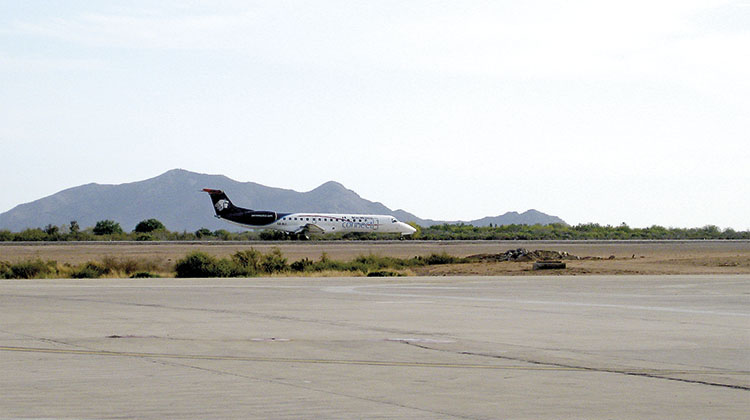 Also known as Playa de Oro, it is located in the west of the state of Colima. The distribution of commercial passengers is very balanced: 55% of the traffic is domestic and 45% international. No need to increase the capacity of the runway and the commercial aviation apron over the entire time frame of the study was identified. For the terminal building, the expansion and remodeling of the medical clinics, security controls, waiting room and baggage claim area are proposed. 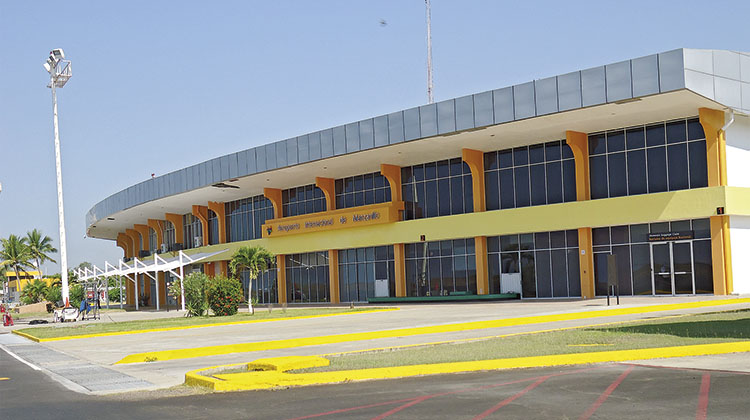 GAP was created in 1998 when the Mexican government privatised the administration of 35 of the 58 airports in the national network. The Group was awarded a 50-year concession for 12 of them. That same year, Aena Internacional was established, which has a 33.33% stake in GAP via the company Aeropuertos Mexicanos del Pacífico (AMP), one of GAP’s strategic partners. At present, the 12 Mexican airports have been joined by two more in Jamaica: the Sangster in Montego Bay, since 2015, and the Norman Manley in Kingston, since 2019. GAP has been listed on the Mexican and New York stock exchanges since 2006 and is one of the largest private airport groups in the Americas and the largest in Mexico, with a market share of 26.3% of total traffic. In total, in 2019 it processed 48.7 million passengers, 8.4% more than the previous year. 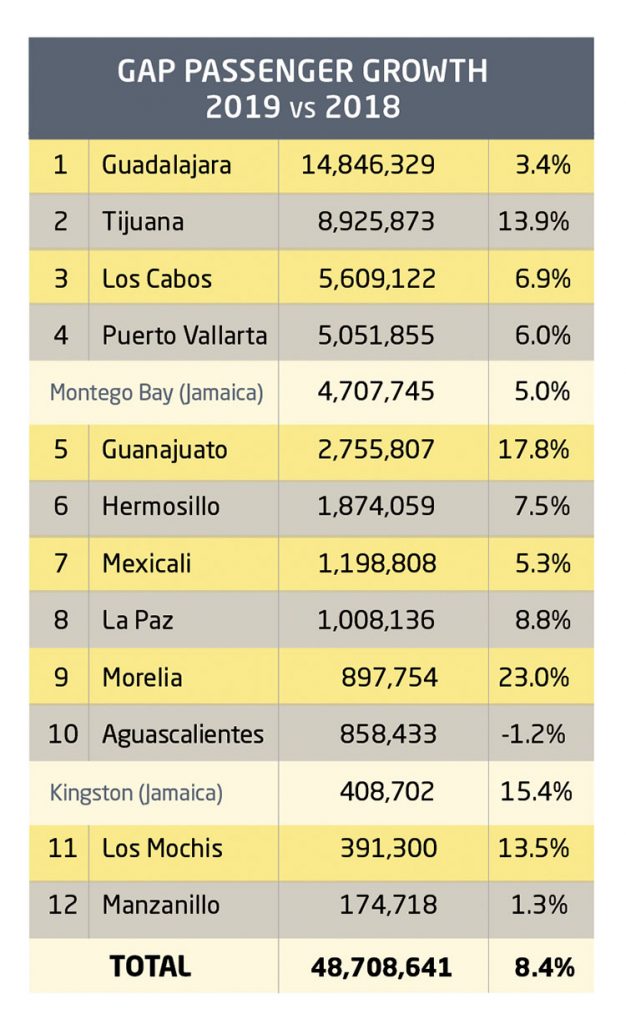 SOURCE_GAP FORECASTS AS OF JANUARY 2020

WHAT IS A MASTER PLAN?

A Master Plan is the document that constitutes the main planning tool for the development of an airport and governs its development over different time frames. It takes into account its geographical and socio-economic environment, based on the current situation. Since traffic and expected demand are constantly evolving due to multiple factors, they need to be updated regularly. Master Plans involve two distinct planning figures:

Within the ‘proposed development’, all plans include an aeronautical easement study, a section on environmental measures, the noise footprint of each airport, a preventive maintenance plan for the facilities, an accessibility study in accordance with Mexican legislation, and a proposal for tariffs calculated on the traffic units.

Previous Article To err is human but so is to prevent 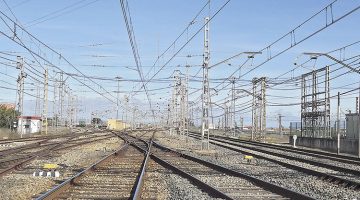 Railway modernisation for the port of Huelva