By employing the traditional technique of riveting, riveted-steel marquees that have been affected by corrosion at Aranjuez station –a historic building dating back to the 19th century– have regained their full splendour. Construction work entrusted to the temporary business association (UTE in Spanish) Restauración Estación de Aranjuez has been carried out under the direction of experts from Ineco for Adif. The project is part of the Ministries’ of Public Works and Culture “1% Cultural” programme.

The renovation work is part of the comprehensive restoration project drawn up by Ineco in 2008 which sought to remedy shortcomings while remaining consistent with the historic character of the architecture. These large, riveted iron structures were built as a result of the Industrial Revolution during the 19th century and are epitomised by the Eiffel tower. Spain lagged a bit behind other cities with regard to the use of iron in architecture and engineering as can be seen in countless examples from Paris, London, Amsterdam, Belgium and Germany in addition to Boston and New York in the United States.

With all of this, transport infrastructure in 19th-century Spain such as stations, bridges and viaducts requiring versatility, luminosity, spaciousness and low prices were easily adapted to the engineering of iron which was best received by engineers of that time period as well as by architects. Examples of riveted iron infrastructures in Spain include the Atocha and Delicias railway stations, the Catalonia Railway Museum, the Valencia railway station and the Aranjuez railway station –the main feature of this article. Furthermore, some quite representative buildings include Sabatini’s Royal Firearms Factory in Toledo and the Geological and Mining Institute of Spain, in addition to bridges and viaducts such as the prominent Triana Bridge.

Spanish transport infrastructure in 19th-century such as stations, bridges and viaducts requiring versatility, luminosity, spaciousness and low prices were easily adapted to the engineering of iron

Aranjuez station is one of the most characteristic vestiges of the industrial age of the 19th century. The earliest railway facilities at Aranjuez were built in 1851 for the line connecting Madrid with Alicante, popularly known back then as the ‘Tren de la Fresa’ (The Strawberry Train) and whose name is now in use once again for tourist services. This station also provides service to the C3 Madrid-Aranjuez commuter rail line. It is the second oldest railway line in Spain (the oldest is the Barcelona-Mataró line, 1943) and is one of the monuments of the Royal Sites of Aranjuez, a Unesco World Heritage Landscape Site since 2001. This line originally reached all the way to the Royal Palace. The original station faced towards the palace on grounds of the company’s prestige and the fact that they needed support from the monarchy. Nevertheless, this location caused so many problems affecting train traffic that it became necessary to build a new station with a completely different layout. The platform marquees are living proof of the iron beams and framework –signs of progress from that time period– that were used to construct public buildings such as stations, markets, factories, libraries and bridges.

The technique of riveting

The steel marquees, roofed by fibre cement and fluted glass, were built around 1851 to provide shelter over the station’s three platforms which were later renovated around 1980 in order to adapt them to the trains and general regulations at that time. As can be observed in the images, the marquees suffered from corrosion problems that affected their structural framework, foundation and ornamentation due to an unsatisfactory roof water drainage system, thus causing damage to the suspended wooden ceiling and corroding the metal. Rehabilitation and restoration of these marquees was a year-long, painstaking process that rediscovered the traditional technique of riveting.

Riveting is the process of joining together several metallic pieces (metal sheets and/or profiles) using rivets. Rivets are elements that are similar to screws –but without the thread– consisting of a cylindrical shaft called a shank or the body, and a head normally shaped like a spherical cap, such as the rivets utilised for the marquees at Aranjuez station. These rivets are manufactured from ductile, malleable and durable metals such as copper, aluminium, some alloys and mild steel, such is the case with the rivets presented herein.

To join together metal pieces made from steel, rivets are used –also made from steel– whose quality and characteristics can vary. Holes are drilled just once, piercing through two or more pieces, after having assembled, clamped and tightly screwed said pieces together. Once the holes have been drilled, the pieces are separated from each other in order to eliminate metal scrap, remnants and sharp edges from the surface. The diameter of the holes, save for exceptional cases, is made 1 millimetre larger than the diameter of the body of the rivet. Selecting the length of the body of the rivet is very important: after the rivet is placed in a furnace and uniformly heated to a temperature between 950 and 1,050 ºC in order to allow for its moulding, the riveting process is carried out by introducing the heated rivet into the hole on the pieces which are to be joined together. The body of the rivet should be cast and forged in order to form the shop head of the rivet. This piece must completely fill the hole. To form the shop head, either a riveting machine applying uniform compression is utilised, or a pneumatic hammer with a riveting pin or a bucking bar is used, always held steadily in place. These tools –not the direct strike of a hammer– are used to form the rivet’s second head. Both the furnace and the riveting machine need to be located close to the area where the riveting is to take place so as to avoid significant cooling of the rivet before it is set into place. The pieces that are joined together must lie perfectly flush and tight against each other to ensure a union without bending or warping. Afterwards, the rivet is introduced into the pieces that are being joined together, and the body of the rivet is forged. This process is carried out using a pneumatic hammer and a bucking bar on the spherical head of the rivet. 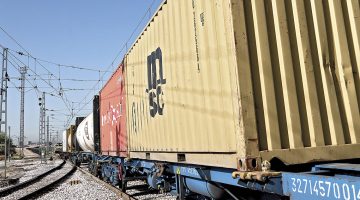