Ineco has drafted a master plan for Germán Olano Airport (Puerto Carreño) and airport planning schemes for San Bernardo (Mompox) and Contador (Pitalito) Airports for the Colombian Civil Aviation Authority. These are three small airports that have great impact for the economy and connectivity of their respective regions, especially thanks to tourism, which is opening up the prospects for a promising future. 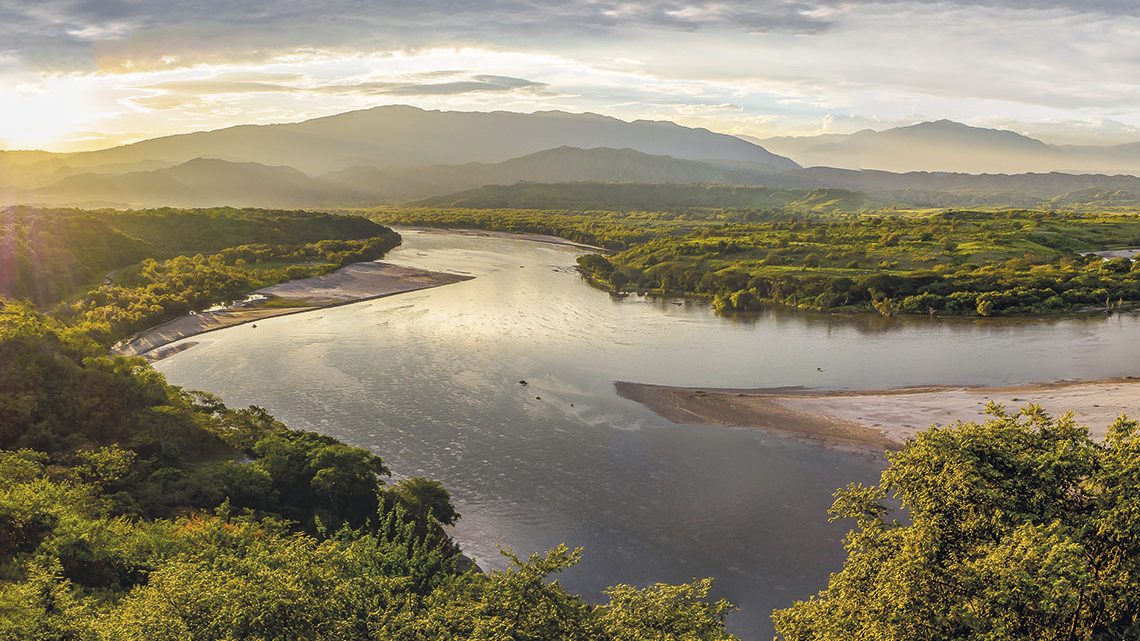 Secondary airports are essential for connectivity in a country with a territory as extensive and rugged as Colombia. The Andes Mountains and large rivers such as the Magdalena, Orinoco and Amazon crisscross the country, and many areas are isolated and have minimal land transport infrastructures. More than a dozen communities across the country depend on air or river transport, including Puerto Carreño (Vichada) in the east of the country, bordering Venezuela. In 2018, Ineco, in consortium with the Colombian consultancy firm Concol (now WSP), produced the Master Plan for Germán Olano Airport in Puerto Carreño and the airport planning schemes for Contador de Pitalito and San Bernardo de Mompox Airports. The three airports are administered directly by Aeronáutica Civil, Colombia’s Civil Aviation Authority.

This is the provincial capital of the southern subregion of the department of Huila, Colombia’s main coffee-producing area and one of the most dynamic economic hubs in the region. It is a municipality with a vocation for tourism, strategically located close to the departments of Putumayo, Caquetá and Cauca, boasting several tourist attractions, including the San Agustín archaeological park, one of Colombia’s most important archaeological sites. Since the beginning of the peace process, the number of tourists who visit the area has increased and the regional government has set its sights on turning Pitalito into an important node of development thanks to its significant agricultural, commercial and tourism potential and its strategic location within the country. 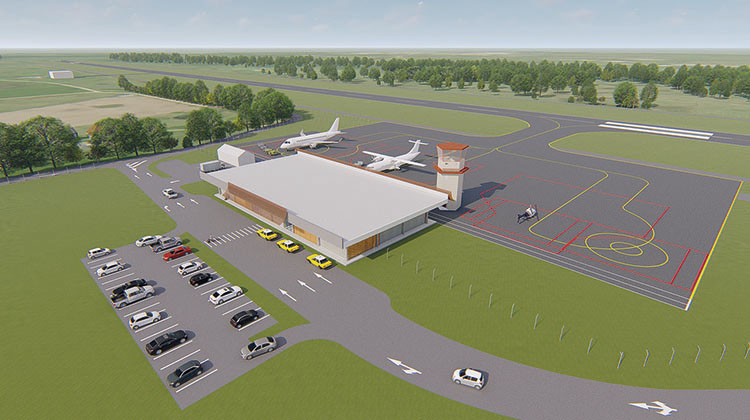 Proposal for the development of Pitalito Airport involving runway extension and a new terminal.

This is the capital of the department of Vichada, the second largest in Colombia. It is located on the border with Venezuela. It is an area with great ecological, hydrological and ethnic richness, with some of the principal activities including recreational fishing and commercialisation of ornamental fish. The region is also home to part of the El Tuparro National Natural Park, a national heritage site that was recognised as a biosphere reserve by UNESCO in 1982. The city is surrounded by three important rivers, the Orinoco, one of the most important river systems in South America, the Meta and the Bita, the latter of which is listed as a protected river. Germán Olano Airport is located in an urban environment and is the principal means of access to the municipality as river navigation is only possible at certain times of the year, and because of its location far from other major population centres and the major difficulties for access by land.

The three airports have good growth prospects linked mainly to the development of tourism, which has increased thanks to colombia’s peace process, among other factors

This municipality was listed as a heritage site by Colombia in 1959 and a world heritage site by UNESCO in 1995, thanks to the preservation of its colonial architectural features. The city hosts two important cultural events that currently generate most of the airport’s business: the Holy Week celebration, ranked second in importance in the country after Popayán, and the Mompox Festijazz jazz festival. The local economy revolves around fishing, its famous ornamental gold filigree work and tourism, which is one of the most important factors for creating passenger demand. In addition, aviation has great potential due to the area’s important tourist attractions and the difficulty of accessing them by land, as well as the best regional integration once the new Bodega-Yatí bridge goes into service, which will improve the area’s connectivity by land.

Proper planning that takes different development scenarios into account is fundamental for organising the future growth of an airport and meeting the expected demand with all of the required guarantees of safety and quality of service. Ineco has extensive experience in this field of planning in airports in Spain and abroad.

In the cases of these three Colombian airports, Ineco studied the current situation of each one and its socioeconomic area of influence, which served as a basis for the development of a traffic projection for the next 30 years. This projection enabled us to determine future needs in the short, medium and long term and, based on the current situation, the design alternatives. Subsequently, an analysis of the environmental, urban and social impacts was carried out, which, together with the rest of the factors studied, determined the alternative to select. Lastly, detailed calculations were prepared to determine the financial investment required by the different actions in the short, medium and long term at each airport. The work was complemented with 3D modelling of the proposed development at each airport and video visualisations of each of them.

The three airports are between 500 and 900 kilometres from the national capital, Bogotá, located in the centre of the country; the airports are used exclusively for domestic traffic and, with the exception of Germán Olano in Puerto Carreño, handle only passenger traffic. The latter, along with the Contador Airport in Pitalito, offers ‘social routes’ that are subsidised by the government and operated by the airline Satena, while in San Bernardo de Mompox, air taxis account for 100% of the airport’s operations, although scheduled flights are expected to begin operation in the near future. As for their airport infrastructures, all three have runways shorter than 2,000 metres and small passenger terminals. In terms of traffic, the airport with the highest volume is Puerto Carreño, with 41,825 passengers and 5,885 tons of air cargo in 2017. Contador de Pitalito Airport, recorded a total of 15,530 passengers, all carried by the airline Satena, while San Bernardo de Mompox serviced 685 passengers, all of them air taxi traffic.

According to the studies carried out by Ineco and Concol, all three airports have good growth prospects of around 4% per year over the next 30 years, linked mainly to the development of tourism which, among other factors, has been boosted by Colombia’s peace process.

The long-term development of the three airports calls for improvements to airport infrastructure both on the ground and in the air in order to meet demand according to national and international quality standards and to comply with Colombia’s current regulations. For the study horizon of 122,800 passengers and 4,580 operations at Germán Olano Airport in Puerto Carreño, the main actions include an extension of the 150-metre runway in order to operate flights to Bogotá, a new apron for aircraft and helicopters, a new cargo area, as well as a new passenger terminal that meets international safety standards in terms of passenger flow and where good passenger service is provided.

Ineco carried out a socioeconomic study of the area of influence of each airport, which served as a basis for calculating a traffic projection for the next 30 years

At Contador de Pitalito Airport, traffic of 63,000 passengers will be reached with the proposed development, and actions therefore include the extension of the runway by 370 metres in order to operate flights to Bogotá, apron enlargement for the parking of up to three aircraft, a new passenger terminal, a cargo area and weather station, and adequate space has been reserved for a new control tower.

The following actions are planned at San Bernardo de Mompox Airport to meet the long-term demand of 12,360 passengers per year: a runway extension of 370 metres to operate flights to Bogotá, a new apron for parking four aircraft, a new passenger terminal incorporating the current terminal, providing passengers with an example of the municipality’s typical colonial architecture, and the reservation of space for a new control tower.

Actions at all three airports include adapting their airfields to current regulations and renovation of road surfaces, new firefighting buildings, car parks and adequate access to each of them, and the necessary facilities for airport operations, such as power plant, fuel storage, hydrocarbon separation plant, water treatment facilities, drainage facilities, etc. 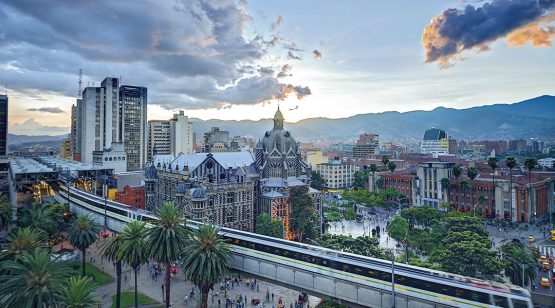