Improving mobility for those who have difficulties is a reflection of developed societies with a keen sense of social justice. In Spain, equal access to public transport has been acknowledged as basic right, and companies like Renfe have been working for years to achieve this goal. 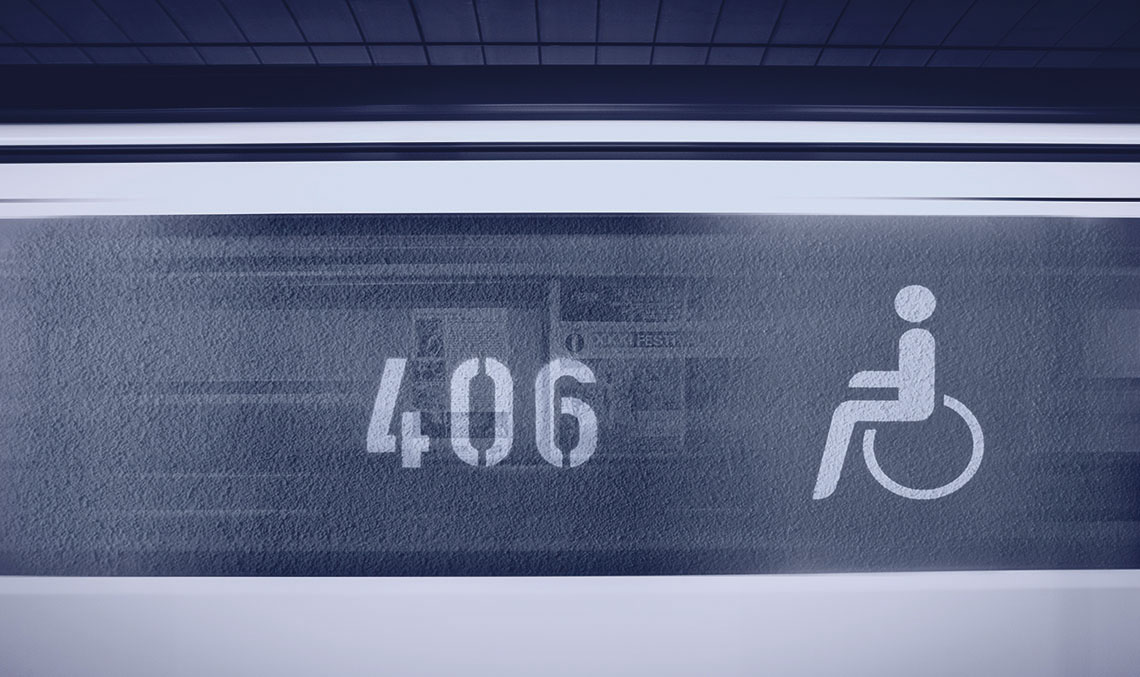 EXPERIENCE IN ACCESSIBILITY. Ineco, as an engineering and public consultancy company, has extensive experience in the remodelling and modernization of railway stations and airport terminals, in which the accessibility is one of the keycriteria.

Reduced mobility may be permanent or temporary, and it affects a broad spectrum of the population. This may include wheelchair users, people carrying large or heavy packages, people who are blind or deaf, as well as the elderly, pregnant women, parents with children in strollers, or people who have other physical difficulties to move normally. When using public transportation, their quality of life can be greatly affected if the infrastructure and adequate means to overcome barriers is not available. For this reason, the European Community and Spain both have laws that regulate the basic conditions of accessibility and non-discrimination in the access and use of means of transportation by people with disabilities.

In the case of Spain’s public transportation services, both the Ministry of Public Works and Transport and the public companies Aena, Adif and Renfe have spent years designing and improving transportation systems so that people with disabilities or reduced mobility can access and use them safely and comfortably. As part of this effort, in 2007, Renfe Operadora created Atendo, a free service to provide assistance to passengers with disabilities or reduced mobility. Atendo is a cutting-edge initiative in Europe and currently serves more than 120 railway stations. At the same time, in 2007, the company launched a Universal Accessibility Plan, which was extended and improved in 2010 and includes the adaptation of stations and trains.

Ineco, as an engineering and public consultancy company, has extensive experience in the remodelling and modernization of railway stations and airport terminals, in which the accessibility is one of the key criteria. Both the engineering and architecture teams, in the project phase, and the construction management team, have been working on conditioning and adapting mobility in more than 150 Cercanías stations since the start of this century.

In order to ensure the improvement of station accessibility, Ineco has drawn up execution projects for each station by identifying shortcomings and requirements, to provide a more sustainable approach and also carries out the works based on railway operation in order to avoid disrupting passenger travel.

Many Spanish stations are more than 80 years old and, although they have undergone constant improvements, their facilities need to be updated to conform to current regulations. In general, the scope of these actions includes the installation of lifts connecting to walkways under or over tracks to link the platforms to each other or to the other areas of the station, the adaptation of stairs to the width and number of flights established in the standard, improvements in lighting, including routing elements in flooring, changing flooring to comply with non-slip requirements, raising platforms or adapting the height of the edge of the platform, and the addition of signal bands and platform edge pieces, in accordance with the Royal Decree.

This report showcases the work and projects currently being carried out as part of the Renfe Station Plan in six Cercanías railway stations in the provinces of Seville and Málaga. The Los Boliches station forms part of the C-1 line in Málaga’s commuter rail network, and it serves approximately 1,928 passengers per day.

The works carried out at this station have resolved the main problem: to allow accessibility for people with reduced mobility by installing a lift and improving access using stairs and a ramp.

The actions consisted of the installation of a panoramic lift; modification of the arrangement of stairs and ramps; widening the access walkway to the platform; replacement of flooring and railings; raising of the platform above the level of the track; adaptation of edges in accordance with Adif regulations regarding the installation of podotactile flooring and signalling bands; modification of the shelter and reinforcement of its lighting to comply with current regulations, and replacement of the lighting system with LEDs. The Lora del Río station forms part of the C-1 line in Seville’s commuter rail network, and it serves approximately 2,466 passengers per day.

The works at this station provided a solution to the existing accessibility limitations, adjusting the edges of platforms and installing lifts in the underpass, as well as raising the height of 31 metres of platform 2 in the direction of Córdoba, and extending platform 1, also approximately 31 metres long, in the same direction, giving both platforms a total length of 200 metres. Platforms 2 and 3 were also equipped with a shelter, over the stairs and as far as the lift access. The platform lighting was strengthened and replaced with an LED lighting system.

Another important addition was the installation of three new panoramic lifts that allow the movements of all passengers to the different platforms through the underpass. The Virgen del Rocío station forms part of the C-1, C-4 and C-5 lines of Seville’s commuter rail network. It serves approximately 6,758 passengers per day and is located in front of the Virgen del Rocío University Hospital in Seville.

The main actions at the station focused on inserting two lifts to allow accessibility between the lobby and the two platforms. The lifts were installed in this location due to the need to give priority to adequate functional distribution in the lobby as well as on the platforms. On the main platform, platform 2, the structure and layout of the ramp were modified to accommodate the lift. On platform 1, a panoramic lift was installed adjacent to the building, in the platform access area, and occupying part of the embankment.

In addition to the installation of lifts, a series of actions were carried out on the lobby, underpass and platforms to improve accessibility and appearance. These included the relocation of the existing ticket office in the commercial space, currently unused, allowing the rest of the commercial space to be used as an entrance lobby area, the installation of podotactile route indicator and the arrangement of turnstiles in a single set located in the lobby. Over the course of the project, a Customer Service area, separate from the lobby, was also implemented before the turnstile area, facilitating adequate provision of passenger services. The Fuengirola station forms part of the C-1 line, which covers the route between that station and Málaga-Centro Alameda. The Fuengirola and Los Boliches stations are the two stations in the municipality that provide this commuter rail service.

With the works carried out at the Fuengirola station corrected its accessibility and lighting shortcomings. The main action consisted of adapting the central platform and lighting. To do this, both sides of the edge of the platforms on track 1 and track 2 were trimmed by between 5 and 15 cm to adapt them to the train’s clearance and the new piece of platform edge that was installed, along with the podotactile strip and yellow safety strip, in accordance with current accessibility regulations.

Floor routing was installed, along with signs for stairs and platform lifts on platforms and in the lobby. In addition, lighting, which is required from the street level to the platform, was strengthened. The Bellavista station forms part of C-1 line in Seville’s commuter rail network (Lebrija-Utrera-Sevilla-Lora del Río), the network’s longest line along with C-3, and one that receives the most passengers, with an approximate demand of 1,683 per day. It is located on the edge of the city, where the railway line marks the division between urban and agricultural land.

The works solved the station’s main problem , which was to allow accessibility by people with reduced mobility by installing lifts. In addition, a series of actions were carried out on the underpass and the platforms to improve accessibility: installation of podotactile routing in the underpass; flooring to signal the location of lifts and stairs; and the replacement of the lighting system in the underpass with one with anti-glare LED technology. The works on the platforms involved the demolition and construction of new platform edges, following the guidelines for the improvement of accessibility to the railways stipulated in RD 1544/2007 and the Adif Accessibility Technical Manual. The Benalmádena station is located at KM 19.6 on the of the Málaga-Fuengirola Iberian-gauge railway line and forms part of the C-1 Line of the Málaga commuter rail network.

On platform 1 of the Benalmádena station, the markings of the platform edge had to be adapted. Two carborundum strips (silicon carbide) were constructed in situ on the existing platform edge, in addition to the with the installation of a 60-cm podotactile piece and the yellow approach strip.

The main work was done on platform 2, raising the height of the entire length of the train platform (80 metres in total) to 68 cm above top of the rail and installing a new platform edge in accordance with the regulations. The platform was raised by constructing a rough brick wall and a new reinforced concrete floor, with the new edge piece installed on top, with a new 60-cm podotactile strip made of button tile, and the yellow warning strip. The new platform flooring was made of polished concrete.

In the lobby, route indicators were installed from the entrance door of the building to the passenger building, to the lifts and stairs that connect to the platforms, installing new signal flooring on them. The lighting on both platforms was renovated.

Articles 9.2, 10, 14 and 49 of the Spanish Constitution establish the principles of freedom, equality, participation and care for people with disabilities, ensuring minimum levels that extend to the entire country. Subsequently, Act 51/2003, dated 2 December, on equality of opportunity, non-discrimination and universal accessibility of people with disabilities, was enacted. Years later, and for the transportation sector, in addition to the European legislation in the field of technical specifications for interoperability (TSIS), Royal Decree 1544/2007, of 23 November, regulated the basic conditions of accessibility and non-discrimination for access to, and use of, the modes of transport for people with disabilities. This decree stipulates that stations must follow general concepts of compliance with accessibility throughout the entire travel service for passengers in railway stations, from parking until they board the train. This adapted service must connect essential points of the station: ticket sales, information, toilets, cafeteria and platforms.

This involves the following actions throughout the service:
Tags: AccessibilityAdifAenaECInecoMinistry of Public WorksRenfe

Next post Peru, in between the earth and sky 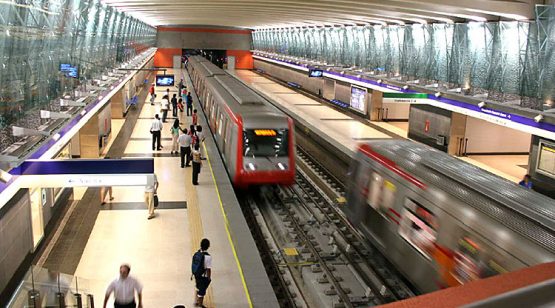