With the opening of the high-speed line, the trip between Madrid and Granada will take 2 hours and 45 minutes. The discovery of archaeological remains near Antequera and complex hydrogeology around the town of Loja were the main challenges to overcome in the final section, where Ineco carried out different works for Adif Alta Velocidad. 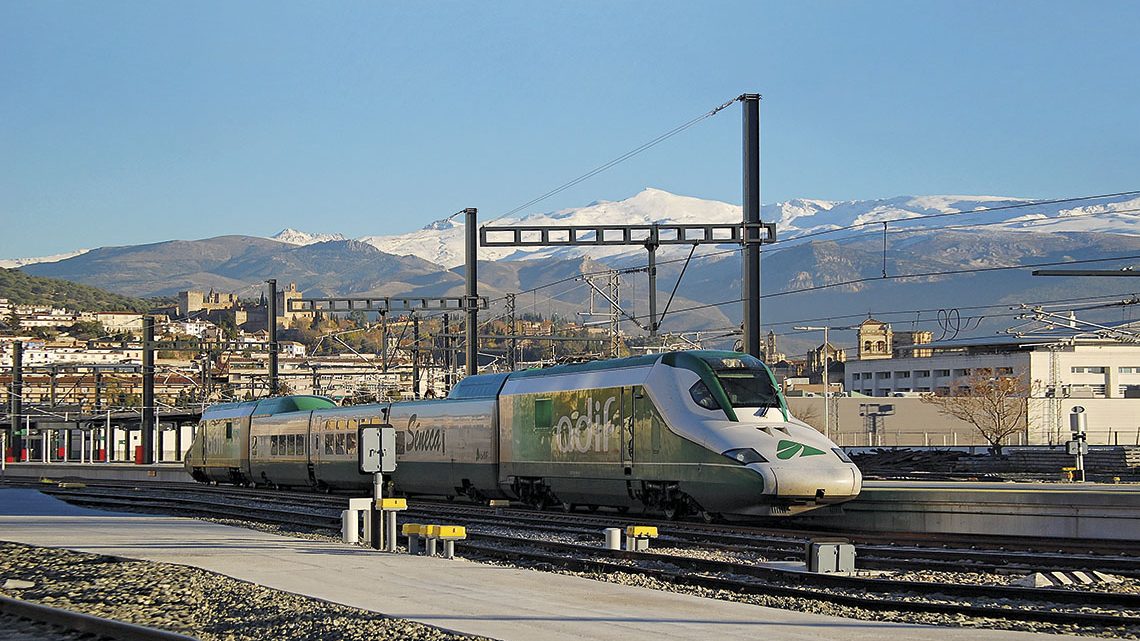 AVE TO GRANADA. One of Adif’s laboratory trains during traffic tests on the access to Granada. / PHOTO_FERNANDO DÍEZ (INECO) / COURTESY OF ADIF

Pre-validation tests on the line between Antequera and Granada ended on 20 December 2018, when traffic control was transferred to Adif Alta Velocidad. The infrastructure manager then gave the green light for the start of a period of internal ERTMS traffic testing between Antequera and Granada, prior to reliability and training processes. Once this phase is complete, the high-speed AVE connection between the capital of Spain and the city that is home to the Alhambra will be a reality.

The 114 kilometres of line between Antequera and Granada and its direct connection to Málaga via the Gobantes Junction have been built predominantly in standard gauge, 33% double-track and the rest single track electrified at 25 kV with a top speed of 300 km/h. The exception is 26.3 kilometres of mixed-gauge line consisting of three rails where the line passes through Loja and at the entry into Granada. With the commissioning of the new line, Granada is now finally connected to the rest of the Spanish high-speed network through the Córdoba-Málaga line.

Traffic testing was the final job carried out by Ineco for Adif and Adif Alta Velocidad. In 2018, Ineco’s traffic management team directed traffic control and performed functional testing during phase 3 of track assembly, facilities and overhead contact line works on all sections. Ineco’s qualified personnel were responsible for comprehensive rail traffic management, which involved directing operations, supervising safety in dangerous areas of the works and ensuring compliance with train safety, construction and testing regulations prior to handover to Adif. The team also managed safety facilities from the CTC located in Granada and was responsible for managing geometric and dynamic testing with laboratory trains to ensure optimum traffic conditions at >10% of the maximum speeds allowed at each point.

The first steps: the construction projects

In 2005, as part of its 2005-2020 Strategic Infrastructure and Transport Plan, the Ministry of Public Works, through a public tender, awarded Ineco the infrastructure and track construction project for the high-speed line between Bobadilla and Granada, part of the Tocón-Valderrubio stretch. The section was designed to allow general speeds of up to 350 km/h and 220 km/h over points. The total length of the section was 14.082 kilometres, with the most significant structures being a 734-metre-long viaduct over the Brácana ravine and the 650 metre Íllora cut-and-cover tunnel. With the project in the home stretch prior to handover, archaeological remains were discovered in the town of Escóznar known as ‘El Pago de El Tesorillo,’ a place mentioned vaguely in a scientific article as the location of undetermined Roman ruins. In order to minimise impact on the area, the railway gradient was raised, and the embankment was replaced by a 150-metre viaduct. The design of El Tesorillo viaduct consisted of five 30-metre spans, a maximum height of 5 metres and detachable beams, in case further excavation is required in the future.

To reach Granada, at an altitude of 738 metres above sea level, AVE trains have to ascend from 380 metres at Antequera, Málaga, crossing gentle plains interrupted only by the complex geography near the town of Loja, flanked by two mountain ranges and crossed by several rivers and aquifers, where the train line has followed a meandering route that dates back to the 19th century.

It is here when they pass through this town – and until the Loja bypass is built – that fast AVE trains have to slow down to travel along the old conventional track adapted with a third rail, a project carried out by Ineco, as well as the 2.3 kilometres of the access to Granada station.

The company approached this complex passage through Loja by carrying out the platform construction and connection route project, including the construction of a new station, renovation of the track and permeabilization of the route. Ineco also adapted and reinforced three small tunnels and the existing geotechnical structures between them for the passage of the AVE high-speed line and several grade crossings were eliminated and replaced by new access routes.

In the construction of this infrastructure, Ineco adopted measures to eliminate or minimise the impact on the environment and cultural heritage, in compliance with legislation. Many affected heritage sites are defined in the construction project, meaning that corrective measures are taken before the works begin. Other elements are found in the subsoil and are only discovered when earthmoving begins, making it necessary to coordinate all of the archaeological activities.

This was the case of the discovery of a Neolithic village near Antequera that affected the route of the AVE high-speed line. A Roman oven from the 1st-century AD was discovered, which Ineco and Adif turned over to Antequera museum in collaboration with the Regional Government of Andalusia’s Department of Culture and the local city council. Removal, structure consolidation and final transfer works were done by a specialized company, Taller de Investigaciones Arqueológicas. Another important site discovered in Antequera was the ‘Casería Mayorga/Silverio’ Roman villa and necropolis, a discovery that highlighted the economic and demographic importance of the Vega de Antequera region in Roman times. One of the most important conservation measures carried out during the infrastructure construction works was the recovery and transport of the most significant elements of this residential villa complex (its mosaic floors and a sculpture of its owner) to the Antequera Museum.

The goal of the project was to put the track into service on the platforms that would allow high-speed traffic to take advantage of the longer section compatible with the current arrangement. The Antequera work base was also connected using 1.435 gauge to the new high-speed line in order to facilitate maintenance operations on the Antequera-Granada line during the operating phase.

When it begins to operate, the line will have ERTMS Level 2. Ineco is currently participating in the dynamic testing of the ERTMS L2 system, as well as ERTMS/ETCS level transitions between the Córdoba-Málaga and Antequera-Granada high-speed lines.

LSB (lateral signalling block) was used with AVE mode ASFA as a backup system to the ERTMS, using audio frequency track circuits and axle counters in mixed track areas. On the conventional line, which will be accessed from Antequera-Granada, an automatic single-track release block was established and the automatic single-track block between Granada and Albolote was adapted.

The facilities that were made available for performing the ERTMS tests included Antequera HS, and Íllora and Granada HS electronic signalling control, with their associated trackside and cabin elements, as well as LSB along the entire Antequera-Granada line; the updating and integration of new equipment for the Antequera Santa Ana CTC; falling objects detectors in elevated sections and tunnel mouths, hot-box detectors, lateral wind detectors and their integration into the remote control of auxiliary detection systems on the Córdoba-Málaga high-speed line; fixed and mobile telecommunications network (GSM-R), fibre optic network, SDH transmission systems, IP/MPLS data network, switched telephone network, etc.; video surveillance and access control and the installation and integration of new CTC equipment into the Antequera control and regulation centre and the centralised control centre in Madrid-Atocha.

In terms of energy systems, Ineco was in charge of technical assistance on works relating to electric traction substations and auto transformation centres, energy remote control and overhead contact lines and associated systems, such as point heating, tunnel lighting and power supply to consumers, in addition to civil protection and safety facilities.

The company was also commissioned to carry out an independent safety assessment (ISA) of the control, command and signalling system, as well as an independent assessment under Regulation 402/2013 (ASBO) of the rest of the TSI subsystems, their interfaces and their secure integration for the commissioning of the line.

Ineco drafted the projects to adapt three stations on the last section of this line to high speed: Antequera, Loja, and Granada. At the Antequera station, the project included a new passenger building, access road, car park, pedestrian connection and track overpasses to connect to the conventional station.

For Loja’s new high-speed station, Ineco was responsible for drafting the project and construction management. It also drafted projects for an underpass between platforms and is currently finalising a project for a footbridge in the neighbourhood of Esperanza. The last works on the station include the construction of the canopies over its central platform.

As for the Granada station, the project for the arrival of high speed included the renovation and extension of its passenger building. The result is a building with a U-shaped layout that brackets the track yard and platforms, which are joined by the head house. The extension is carried out by means of a large canopy that joins the existing and new buildings; it extends and looks out over the plaza to mark the new entrance and is curved to protect the new concourse from the passage of the metro. This outer covered threshold is the hinge point between the existing building and the extension. The eastern façade of the boarding area is transparent to enhance views of the Alhambra and Sierra Nevada.

Works carried out by Ineco for the completion of the Antequera-Granada section:
Tags: Adif Alta VelocidadGranadaInecoMadrid

Next post Aena to manage six airports in Brazil 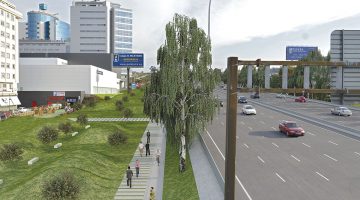 How to humanise urban highways