The EU promotes the use of drones

The recreational and professional drone industry has grown exponentially in recent years and this has led to the implementation of new national regulations. As a result, the European Union is seeking to unify these regulations under the Single European Sky programme, SESAR. Ineco is participating in several projects to define the safety requirements that these unmanned aircraft must meet. 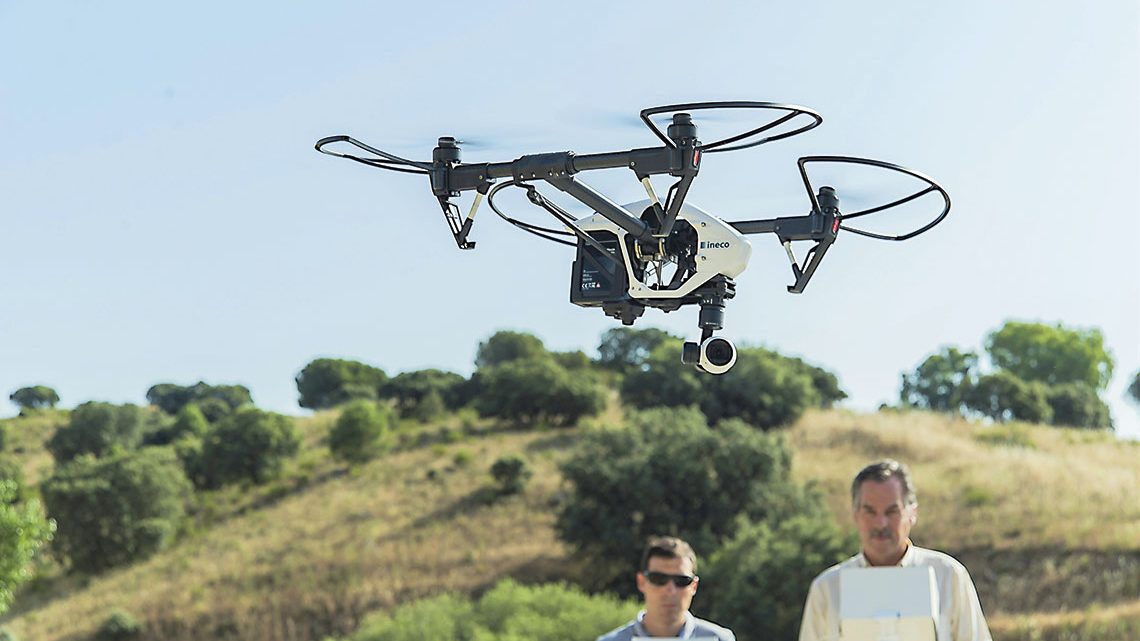 Unmanned aircraft (UAVs, RPAs or drones) are nothing new; these kinds of aircraft have been used as aerial targets to test weapons for more than a century and, indeed, the popular term ‘drone’ was coined by the British military in reference to the sound that these devices made. This is demonstrated by the fact that they were mentioned at the Convention on International Civil Aviation in Chicago, in 1944, which saw the creation of the International Civil Aviation Organisation (ICAO); in fact, Article 8 prohibited the use of unmanned aircraft without the express authorisation of each state.

However, it was the evolution of microelectronics that enabled the sector to break into the mass market. Since the beginning of the 21st century, drones have been increasingly used by the military, although it was not until this decade that the technology started to become available for civilian use thanks to its gradual reduction in price. The low cost and ease of use of these small remote-controlled aerial vehicles, usually multicopters, has rapidly increased the popularity of their use in both recreational and professional fields. Growth of the sector in the last five years has been exponential, as shown by the number of drone patents issued. This growth is not surprising given that this technology has myriad applications, especially in imaging and photography, cartography and topography, surveillance and security, but also in agriculture, emergency support, environment, infrastructure maintenance, etc.

Spain is one of the most active countries in terms of numbers of AESA-registered operators and is also the world’s tenth largest drone manufacturer according to the Global Trends of Unmanned Aerial Systems report published by the Danish Technological Institute in 2019. Ineco pioneered the use of this technology for bridge inspections in 2015.

Ineco is actively participating in the SESAR projects related to the development of U-space: TERRA, IMPETUS and DOMUS

Drones also pose risks, of course, especially if they are operated in residential areas, controlled airspace close to manned aircraft or when drones are flown out of sight of the pilot on the ground. These hazards need to be carefully considered for both recreational and, especially, professional use: they include device failure, loss of control link, in-flight hacking and loss of the navigation or traffic separation systems.

For this reason, the European Aviation Safety Agency (EASA) has stipulated that drones with a take-off weight exceeding 150 kg must undergo a certification process, similar to that for manned aircraft, for both manufacture and operation. However, lighter drones, which are not intended to carry people on board, are not subject to such rigorous safety mechanisms. Consequently, their components and manufacturing are less robust, especially in the case of drones manufactured in large production runs, and standards are more appropriate for toys than aircraft.

In order to minimise the risks, a few years ago, the member states of the European Union began to restrict drone operations through regulations. In Spain, Law 18/2014 regulated the use of drones for the first time, limiting their operations to a height of 120 metres above the ground, prohibiting use near airports and controlled traffic regions (CTRs), in cities and areas with high concentrations of people, and allowing only flights within visual line of sight (VLOS), that is, less than 500 metres from the pilot on the ground. And, of course, drones must be remotely piloted (RPAs) and not operate autonomously.

This regulation greatly limited the type and complexity of drone operations, so three years later Royal Decree 1036/2017 was published to make the development of the sector compatible with safe operation. The new standard still allowed for simple operations, but also more complex ones with prior authorisation by the Spanish Aviation Safety Agency (AESA).

To obtain authorisation, a safety study must be carried out, in addition to specific training and equipment to limit the risk, as well as coordination with those affected, if any, for example, air navigation service providers in the event of operations in controlled airspace. Ineco, in the context of the Ministry of Public Works’ Transport and Infrastructure Innovation Plan, has carried out these kinds of safety studies to obtain the authorisation required to perform complex piloting projects such as the recording of data from radio navigation systems in airports.

Operating requirements in different European countries vary widely. To alleviate these regulatory differences, the EU has published a new regulation that divides operations into three categories (open, specific and certified), depending on the complexity of the operation, in order to harmonise requirements in all countries and facilitate the provision of services in any member state.

In short, it is now possible to carry out almost any kind of operation with drones in any environment, but only if operations are not carried out simultaneously. This means that if demand continues to grow as expected, it will be necessary to coordinate flights to maintain safety. To make this great development of drone operations possible, the EU, in its Warsaw Declaration of 2016, agreed on the need to develop the concept of U-space to allow safe operation of multiple drones at low altitude (below 150 metres) and especially in urban environments.

U-space is a set of services, technologies and procedures to allow the safe and efficient operation of a large number of drones. The conceptual and technological development of these services is being carried out through the Single European Sky ATM Research programme (SESAR), as the EU considers it vital to provide an adequate environment to exploit all of the benefits that drones can bring to society. It will make it possible to coordinate drone operations so that they can be carried out simultaneously. However, the level of coordination will vary depending on the risk and density of this kind of aerial vehicle in the areas in which they are intended to operate; for this reason, the CORUS project has defined different types of airspace for drones: X, simple operations (VLOS) without coordination; and Y, complex operations in simple environments, so they will only require prior coordination of paths through flight plans, and Z, highly complex operations (urban-Zu, airports-Za) that require coordination in real time due to the risks to people and the number of operations.

Ineco is actively participating in SESAR projects related to the development of U-space: it is heading up the TERRA project, which is responsible for defining the ground technologies needed to support the provision of services, is also participating in the IMPETUS projects, whose purpose is to design information systems for the use of drones, and is involved in the DOMUS demonstration project, led by ENAIRE.

EVOLUTION OF THE SECTOR IN SPAIN 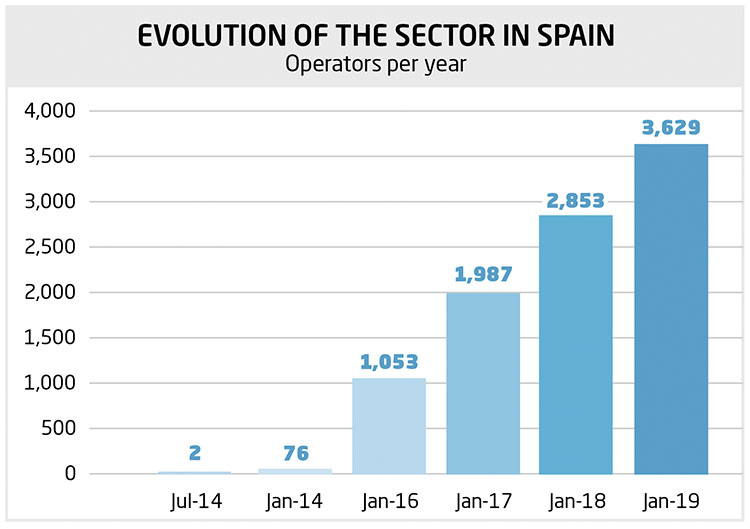 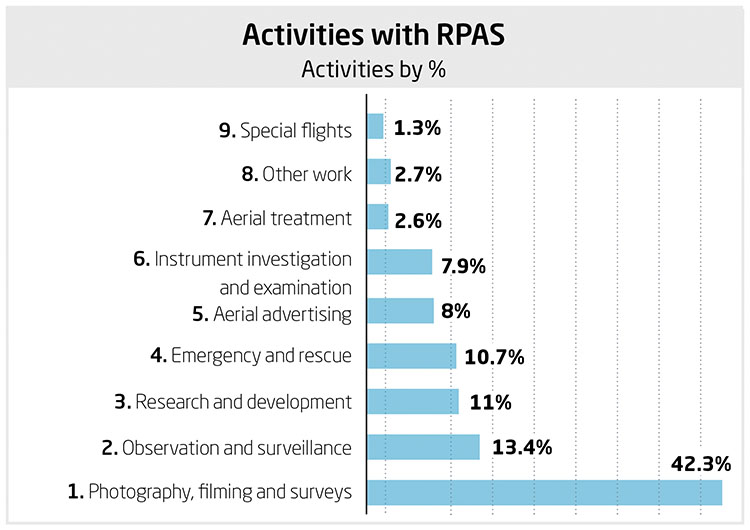