The gateway to the treasure of Sipán

Since late 2014, together with its partner CESEL, Ineco has been working on the preliminary studies for the modernisation of Chiclayo airport. Chiclayo is the fourth largest city in Peru.These analyses will enable us to determine and plan the improvement and enlargement work that aim to turn Chiclayo into the air transport hub of northern Peru and drive trade and the tourist sector built around the huge archaeological richness of the area. 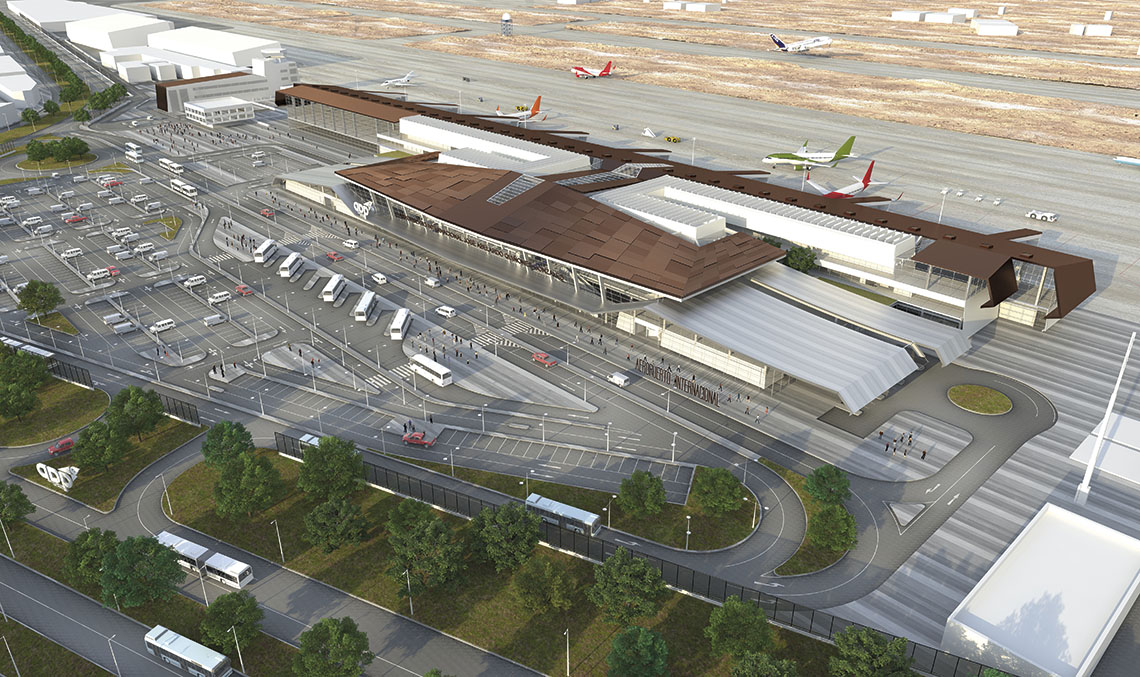 JOSÉ ABELARDO QUIÑONES GONZALES INTERNATIONAL AIRPORT As one of the alternatives to Jorge Chávez airport in Lima, it is important to expand and improve it. For the architectural design of the new terminal, we enlisted the help of Efebearquitectura, a Spanish architectural firm with longstanding experience in building design of airport architecture. / IMAGE_EFEBEARQUITECTURA

In spring 1987, Peruvian architect Walter Alva attended a local police call. The police had discovered looting activities at an archaeological site from the 2nd century in Sipán, 35 kilometres from the city of Chiclayo, in the department of Lambayeque in northern Peru. The remains they found, which include the first intact tomb and grave goods of a Moche leader with his entourage, known today as ‘the Lord of Sipán’, were subsequently compared with discoveries such as Tutankhamen’s tomb in Egypt or even the Machu Picchu complex in the south of the country. Later on in the excavations, another 15 burials were discovered, as well as around 2,000 articles made of gold and silver, valued in some estimates at more than $16 million. Today, they are exhibited in the modern Museum of the Royal Tombs of Sipán, which was opened in 2002 under the directive of Alva himself, and attracts 160,000 visitors a year.

Sipán and its treasure, which is one of the jewels of Peruvian and global cultural heritage, transformed Chiclayo’s demographic and socioeconomic reality. Chiclayo, unlike other Peruvian cities, is not of Hispanic but indigenous origin, and was the epicentre of the pre-Hispanic Lambayeque and Moche cultures. With almost 600,000 inhabitants, it is the country’s fourth most populated city, after Lima, Arequipa and Trujillo. Within a distance of under 35 kilometres from the urban centre, there are also other significant archaeological enclaves, like the Valley of the Pyramids in Túcume, which is a World Heritage Site, and museums such as that of Sicán in Ferreñafe or the Brüning Museum in Lambayeque, the oldest in the area, also dedicated to the local pre-Hispanic cultures.

To the range of local tourist attractions we can add the beaches in the region, such as San José, Pimentel and Santa Rosa, although this ‘sun, sea and sand’ tourism is far from having the same impact as the more cultural attractions. Despite this, in recent years, the flow of tourists in the country has reoriented: before the 1990s it was mostly directed towards the centre and the capital, Lima, 770 kilometres away on the roads, and towards the south, with the Machu Picchu complex and the plains of Nazca being the main magnets for domestic and international tourists.

The central and local governments, as well as the private sector, are aware that the potential for tourist development in Lambayeque and its capital, Chiclayo, has great development margins. The modernisation and enlargement of its airport, which is named after aviator and national hero José Quiñónez Gonzales, is an essential step in boosting tourism. The task is in the hands of the manager of the airport, the company Aeropuertos de Perú, AdP (Airports of Peru), which in 2006 was granted the project by the government of Peru, along with another 11 aerodromes.

Chiclayo airport opened in 1956 and, though it has been classed as international since 1994, the first regular operations of this type began on 28th June 2016 with the introduction of two weekly Copa Airlines flights to Tocumen Airport in Panama. In 2015, according to figures from the General Directorate for Civil Aviation (DGAC in Spanish), there were 7,813 operations, 431,840 passengers and 731,120 kilograms of air freight recorded.

AdP aims to increase these figures and boost Chiclayo as the air transport hub for the whole region of northern Peru. The goal is to increase passenger traffic fivefold to 2.1 million by 2031. To this end it has put in place a process of modernisation that comprises overlaying the runway (2,520 metres long and 45 metres wide) and, once feasibility studies are complete, building a new terminal building, as well as remodelling access ways and other improvement works, including a new control tower, firefighting services, hangars, fuel area, freight terminal, etc.

As this is a co-funded award, it is a legal obligation to plan lines of action as well as the necessary investment, and to have the approval of the Peruvian Government before beginning the work. In December 2014, AdP entrusted the consortium set up by Ineco and Peruvian engineering company CESEL –who are also working on overseeing the enlargement work at Jorge Chávez Airport in Lima– with the task of drawing up these pre-investment and feasibility studies.

The first stage studies revolve around identifying investment alternatives and assessing the technical, economic, social and environmental aspects of the modernisation project. During this stage, both the general conceptual design of the project and the specific conceptual design of the terminal building and other buildings were developed. The aim of these studies is to demarcate the key aspects of the project –what is needed and how it will be financed– to be approved by the concessionaire AdP, as well as the Ministry of Transport and Communications.

The tasks undertaken include an analysis of capacity and demand, studying navigation easements and the general conceptual design, which enables certain basic standards to be defined for the whole project. Thus, regarding airside, we investigated what length of runway would be the most suitable considering type of aircrafts used at the airport, what would be the most effective design for the rapid exit taxiways; how to distribute the parking positions over the apron, how passengers will reach aircraft on foot to reduce turnaround times, etc.

Regarding on the land side, we analysed how to achieve the shortest and most comfortable distances and passenger flows between key points (check-in –security– boarding gates) so as to avoid queues. Modular growth is envisioned that will enable demand to be met. We have researched how to make sure access is fast and well connected to the surrounding area. We also seek to ensure that basic services such as a coffee shop and parking facilities are provided in balance with the other functional requirements.

In addition to drawing up the specific conceptual design for the terminal building, analysing the architectural aspects, placement, shape and size, materials and design of spaces, analysis was also undertaken of the investment necessary and alternatives were compared, and a study was conducted on the environmental impact, permissions management and general coordination of the project.

The second stage of studies is feasibility, which goes deeper into the fundamental technical aspects of the first stage, such as positioning and size of the new infrastructure, the technology to be implemented, the timescale of the work and management of finances. Thus, in terms of airside, the geometric design of the runway will be performed, as well as overlaying designs and designs of traffic signing and road marking and guiding lights, of drainage works and of air navigation equipment and systems.

The studies conducted by Ineco also took into account the physical and socioeconomic environment of the airport, indicated by tourist potential and agroindustrial activity. According to AdP, the airport’s development will aid in boosting both activities, tourism and exportation of agricultural products. Notable among the latter is asparagus, of which Peru is the world’s largest exporter of this fresh vegetable and the second in preserved form; more than half is cultivated on the northern coast. The department (region) of Lambayeque, of which Chiclayo is the capital, is the fifth highest producer of this vegetable in the country. It is exported fresh, preserved or frozen to Europe, the United States and other countries in South America. For this purpose, the concessionaire has announced that the airport will have refrigerated storage units for this kind of air freight. As regards tourism, the city of Chiclayo is located on the ‘Moche Route’ promoted by the Peruvian government, an itinerary which connects several points of cultural and archaeological interest around the axle of Chiclayo-Trujillo. According to the Peruvian Ministry of Foreign Trade and Tourism, more than 923,000 tourists went to Lambayeque in 2015, up 7.4% from the previous year. 77% of foreign visitors came by aircraft, making Chiclayo airport the gateway for international tourism in the region. 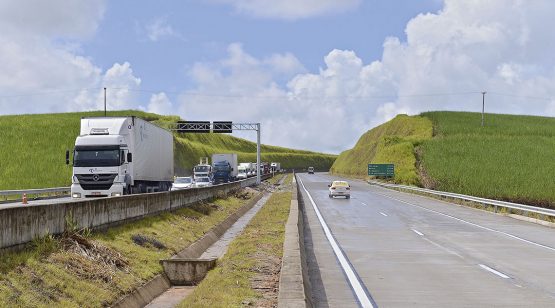