Two decades on the African continent

Ineco has contributed and continues to contribute to the improvement and modernisation of airports and air navigation in several African countries, including Cape Verde, where the company first landed in 2003 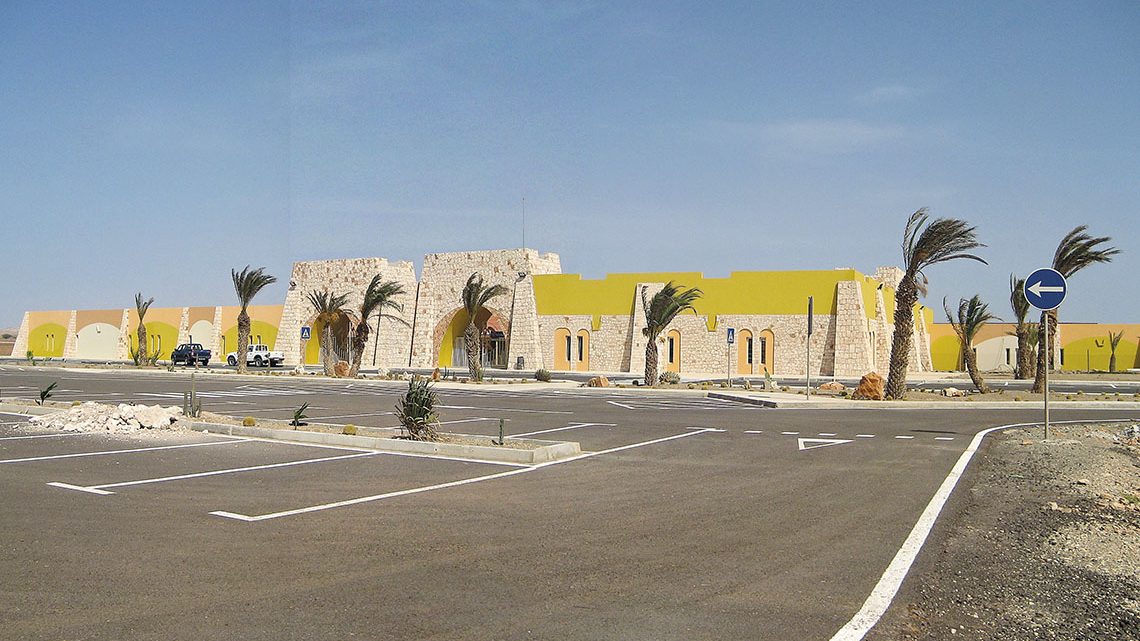 Africa was the location of one of Ineco’s first projects abroad: in 1975, the company, then a small consultancy firm made up of a small group of engineers from Renfe, was preparing a feasibility study for the Kindu-Kisangani railway line in the former Zaire, now the Democratic Republic of Congo. Ineco, which began its aeronautical operations in Africa in the early 2000s, has carried out projects to improve and expand airport infrastructure, navigation systems and airspace management in various countries across the continent. One particularly noteworthy example, due to its condition as a group of islands, is Cape Verde, where Ineco has carried out numerous projects.

A study of the procedures and modes of operation at the São Filipe aerodrome on the island of Fogo is currently underway. Ineco is preparing a review of obstacles and safety in relation to the introduction of night operations and instrument flight conditions, and is designing the instrument flight procedures. Another recent project in the archipelago was a study, carried out in 2019, for the installation of an ILS (Instrument Landing System) at São Vicente’s Cesaria Évora airport, one of the country’s four international airports. 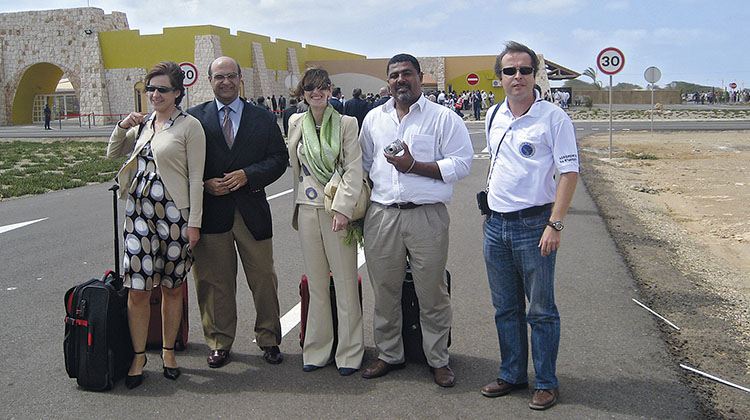 Members of the Ineco team at the opening of the new Boa Vista airport terminal (2007).

The first projects in Cape Verde date back to 2003, with the project and management of the new Boa Vista international airport, which opened in 2007. Since then, a large number of studies, projects and supervision of subsequent improvement works have been carried out. These include the review of the master plans of Sal, Boa Vista, Praia and São Vicente, in 2012, easement studies, technical and economic feasibility analysis of night operation in Boa Vista and São Vicente. In 2014, ASA also commissioned Ineco to draw up the master plans for three domestic airports: Maio, Sâo Nicolau and Fogo, and between 2015 and 2018, the management of the expansion of the passenger terminals at the international airports of Boa Vista and Sal.

Ineco has also carried out its aeronautical activity on the African continent in a half-dozen other countries. In 2015, it worked on updating the air traffic management system for the state-owned Airports of Mozambique (ADM). The company provided support services for the design of ATM systems in the specification of equipment and systems and also provided support for their subsequent deployment.

In 2012, as a result of an intergovernmental collaboration agreement between Spain and Angola, Ineco formed part of the Aena Internacional team that, over the course of a year, developed physical and operational security procedures for the airport of Luanda, the country’s capital. Airport staff were also trained and a quality assurance plan was introduced using indicators, similar to the one applied by Aena at its airports. 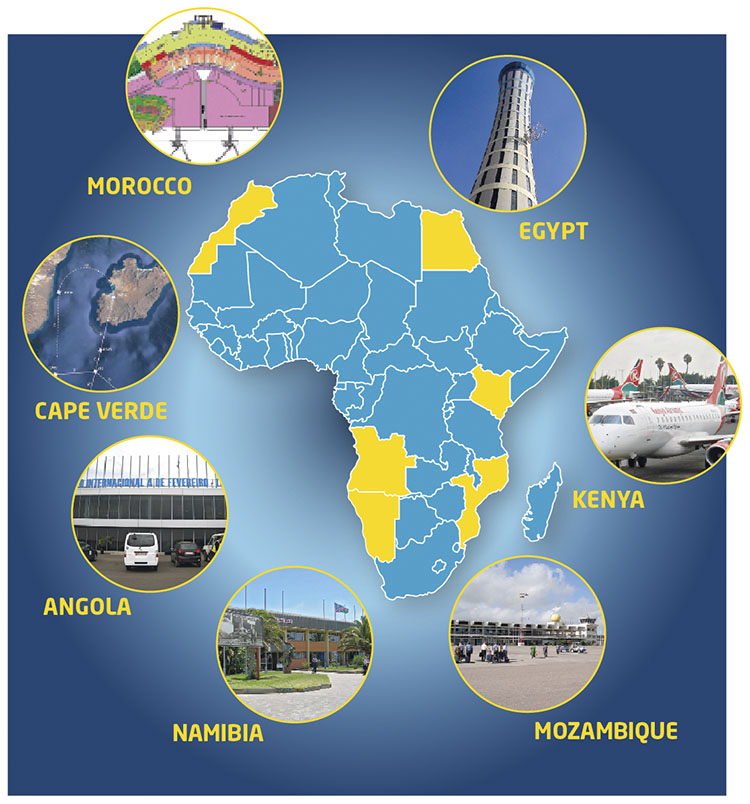 In Morocco, between 2011 and 2012, Ineco was part of the consortium that carried out the Study, analysis and reorganisation of Morocco’s airspace project that was included in the country’s Strategic Plan to boost its tourism industry. At the same time, the company carried out a capacity study for the Moroccan Directorate General of Civil Aviation for the Mohammed V airport terminal building in Casablanca.

Ineco’s first project in Egypt was awarded in an international tender in 2010, when the Egyptian Company for Airports and Air Navigation (EHCAAN) selected the company to develop a strategic plan for the country’s civil aviation. The plan included an analysis of the CNS/ATM infrastructure, the proposal of a new airway network, the definition of a modernisation plan for navigation systems and the development of specifications for a new air traffic control system for the Cairo Control Centre.

In 2009, in Kenya, the company reviewed and updated the expansion project of the Jomo Kenyatta airport in Nairobi. Due to the strong growth in traffic volume up to that point, the airport operator had to revise its planned expansion project. This plan was opened to international tender and awarded to Ineco in 2008. Works included a traffic demand forecast through 2030, the computer simulation of passenger, baggage and aircraft flows –both of the airport’s current situation and future forecasts– and the assessment and proposal of recommendations to optimise the capacity and functional, economic-financial, architectural and operational safety viability of the expansion project.

In 2009, Ineco designed the improvement and extension of the airfield at Walvis Bay airport for the Namibian Ministry of Transport and Infrastructure, for which it also drafted the basic project for a new passenger terminal.

The potential of the African market

Now well into the 21st century, air transport, linked primarily to the growth of tourism, has proved vital to many African economies. In November 2019, the ICAO noted “the crucial importance” of air transport liberalisation in Africa for the achievement of the sustainable development goals of the UN 2030 Agenda, as well as its role as a driver of employment, capable of generating “9.8 million jobs by 2036”, although already in 2018 it estimated that “due to the recent and effective liberalisation of air transport globally, many airport hubs in Africa will be saturated by 2020”. It further noted that “the growth of air traffic in this continent can only be sustainable if the aviation infrastructure in the region is optimised”.

Even with these challenges, the potential of the African aviation sector, which was already showing positive signs before the health crisis, is strong. Forecasts by organisations such as the International Monetary Fund suggest that from 2021 onwards, in emerging and developing countries, which have suffered a “less severe” economic impact from the pandemic, GDP will grow by more than 5%, more than the averages for the world and the large advanced economies. 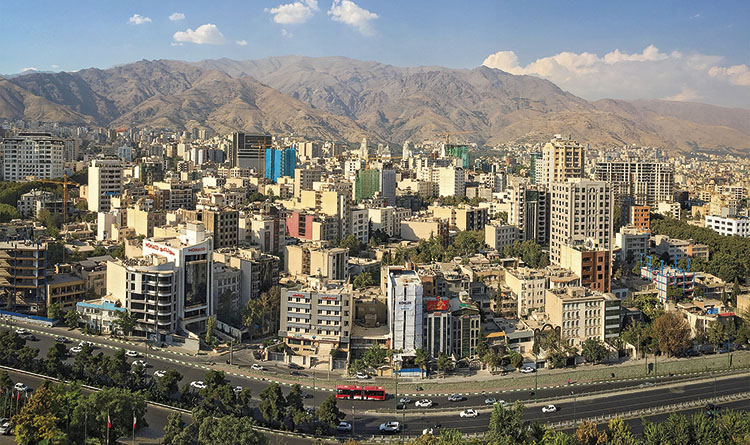