Ineco continues its work in the archipelago so that the growing number of international visitors can enjoy the best airport facilities, which are vital to the island country. It will supervise the enlargement of the passenger terminals of the Sal and Boa Vista airports through 2018. 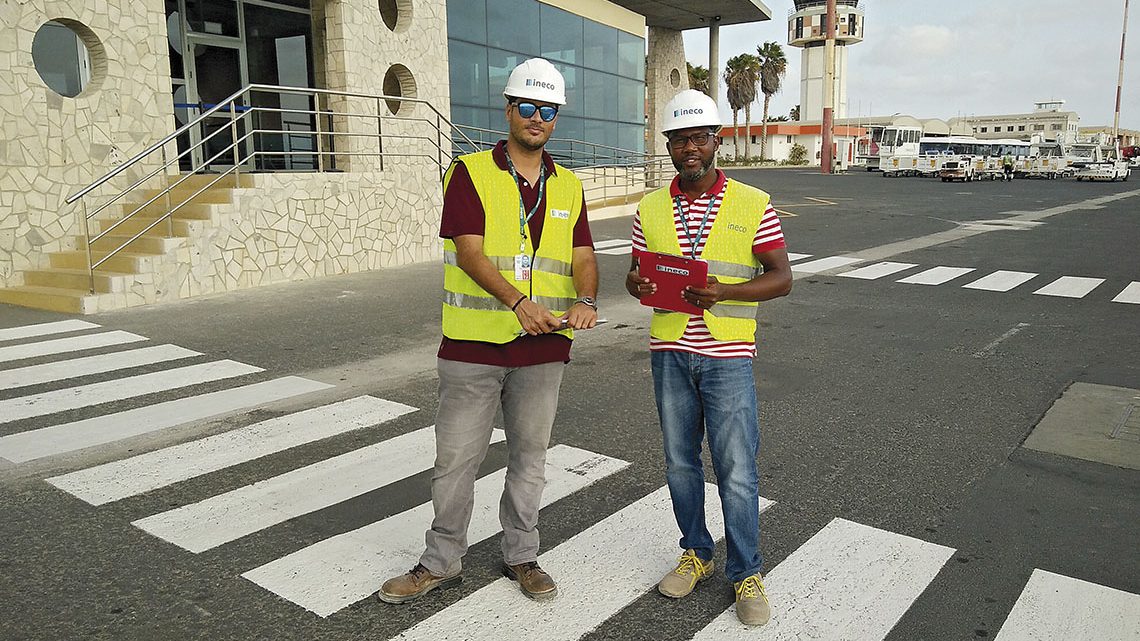 SAL AIRPORT. Ginés Navarro and Diamantino Monteiro, at the Amílcar Cabral international airport on the island of Sal, in front of the new departures building.

In 2016, the airports in Cape Verde –four international airports and three for domestic flights– totalled 2,215,892 passengers, 11.5% more than in 2015. The growth of international passengers, up 22%, was especially significant. Tourism is the key engine driving the country’s dynamic air-travel market, which already contributes a third of its GDP. Cape Verde is an archipelago, a former Portuguese colony, located off of Africa’s Atlantic coast, approximately 500 kilometres from Senegal, and consists of 10 islands, seven of which have airfields. Its long beaches and natural riches attract more and more visitors every year, which has boosted international air transport.

Ineco has been working closely and continuously with the authorities of Cape Verde for 14 years to ensure that the airport network, managed by the public entity Aeroportos e Segurança Aérea (ASA), lives up to the growing demand for air transportation. Beginning in July 2015 to the present, the company has been supervising the most recent enlargement works of the passenger terminals of the Boa Vista and Sal international airports, which have the largest volume of tourists.

The company has drafted the work projects, which focus on external renovation, enlargement of saturated areas and increased comfort and quality of passenger service. The construction is being carried out by a Spanish consortium (Acciona Infraestructuras-Aberdore), while Ineco, with a team of five people, supervises the works at both airports, each located on a different island, Sal and Boa Vista. The work is expected to be completed by early 2018.

Sal, the most international airport To meet this increase in demand, provided for in the Plan that was also developed by Ineco (see IT50), the adaptation work of the current terminal building has been undertaken, covering a total area of 6,464.58 m2. To this end, a mixed solution has been chosen, consisting of both remodelling the existing areas and building an additional 2,022.66 m² of new spaces. Likewise, the plan includes actions to improve the operating revenues of non-aeronautical activities at the airport, increasing the area allocated for shopping.

The former international departures area has been restructured, giving way to new departure lounges in a new building, around 1,110 m2, built as an improvement to the air side façade towards the aircraft parking apron. This boarding area includes a new executive lounge, and 500 m2 of open-air patio with a pool area from which the project gets its name: Oasis.

The space that is no longer occupied by the departure lounges (1,400 m2) has become a new open-plan area for passengers after inspection and passport control, where restaurants and shops are located.

Of the four international airports in Cape Verde, Sal (Amilcar Cabral) is number one with 53% of the total, it is also the one that grew the most in 2016

The arrivals area is being extended to the north with new structures that will house the new unified room, with double capacity, two new baggage claim areas and a more extensive passport control area. The offices of the authorities, such as the police quarters and customs offices, etc., will be located in this new area.

In order to increase comfort levels and to keep passenger service levels as high as possible, the quiet season, during which traveller flow is much less, is being used to perform works.

Boa Vista, character of its own In 2016, Aristides Pereira Airport, in Boa Vista, saw the second largest passenger growth, with a total of 465,049, 10.2% more than the previous year, of which around 400,000 were international passengers. Traffic has been booming since the inauguration of a completely new airport in 2007, built on the old facilities, entirely planned by Ineco, which was also in charge of the technical assistance of the works.

The original design of the facilities, structured around a central outdoor space around a pond, partially covered by tents, makes the building unmistakable and is intended to offer a pleasant welcome to the visitor, thanks also to the materials used such as limestone and wood. In 2011, the aircraft parking apron was expanded, a project drafted by Ineco.

The check-in area currently has six counters and a lobby area for building access that is used for passenger queues. With the expansion of approximately 1,458 m2, there will be space for 12 check-in counters, plus one for special baggage. The perimeter area surrounding the hall will be used for staff offices for the airport administrator and other companies.

At the same time, the reformulation of the current space for domestic departures and passenger control makes it possible to increase passport control booths from two to eight. For national and international departure lounge, two new spaces are generated, separated by a commercial area with independent access and a door between them that can act as a sluice-gate for boarding. In total, the commercial area in the departure lounges has increased by 382 m2.

In the international area, passport control has moved from its location and the number of booths has increased by four, making six in total. The number of baggage claim areas will also be increased from two to four and the waiting area, currently very saturated, will be expanded. The control tower at Sal airport is featured on the 200 Escudos Cape Verde currency note, which is the most frequently-used note in the country for small transactions.

Ineco has had offices in Cape Verde since 2015. The company’s first works go back to 2003, with the design and management of the works of the new Boa Vista airport, which opened in 2007 and then became international. Since then, a multitude of studies, projects and supervision of subsequent improvement works have been carried out; these include the review of the master plans of Sal, Boa Vista, Praia and São Vicente, in 2012, easement studies, technical and economic feasibility analysis of night operation in Boa Vista and São Vicente, etc.

During the first two decades of this century, air traffic volume, driven by tourism, has grown steadily, which has made it necessary not only to expand airport areas dedicated to passengers, but also cargo areas, because the hotel sector has increased the demand for perishable products. As a result, for example, ASA hired Ineco in 2011 to draft the cargo terminal project in Boa Vista. On the air side, the increase in tourist demand and, consequently, the size of aircraft, as well as the number of operations, has required the enlargement and renovation of runways and aprons, which in turn has affected the need to upgrade other facilities. This is the case, for example, at the São Pedro airport, on the island of São Vicente, for which ASA commissioned Ineco to perform a location study and a construction project for a new control tower after the enlargement of the runway.

Previous Article San Bernardo brought up to date with BIM 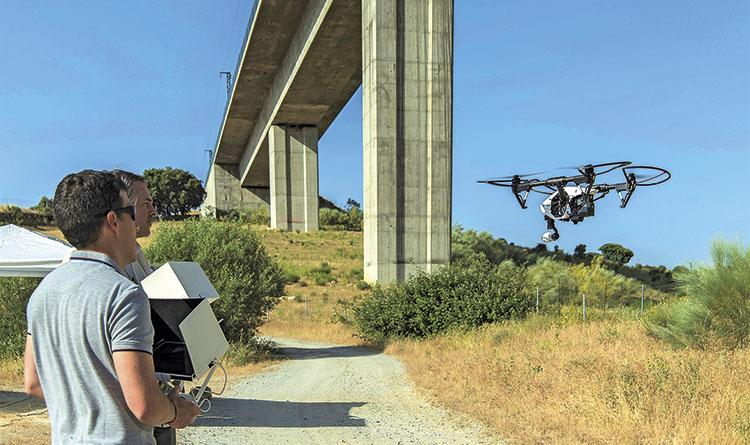 A drone for structural inspections