The stations of Plasencia, Cáceres, Mérida and Badajoz, built at the end of the 19th century, are being renovated for the arrival of the high-speed train, following the remodelling that Ineco designed for Adif Alta Velocidad. 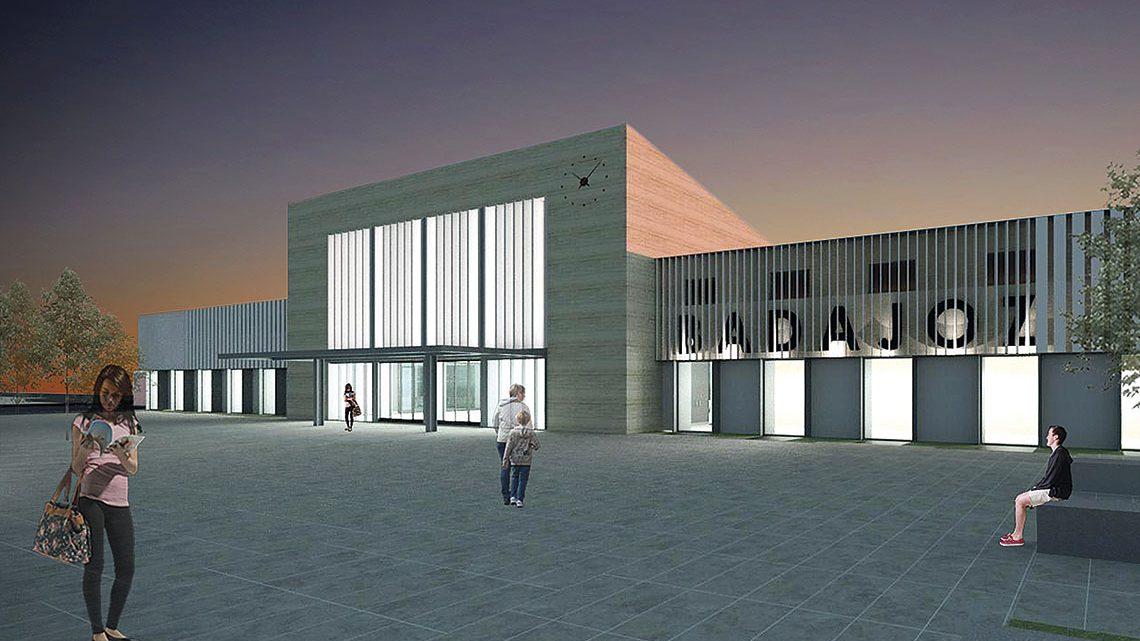 The arrival of high-speed rail (see ITRANSPORTE 69) requires the adaptation of the passenger buildings in the four main stations of the Autonomous Community of Extremadura: Plasencia, Cáceres, Mérida and Badajoz, to the needs of the new railway service. Ineco, in addition to directing the work on the four stations and working on the track renovation, has drafted the remodelling projects for Adif Alta Velocidad, the Spanish railway infrastructure administrator, which include the buildings, entrances and the surrounding area, as well as the platforms, shelters and underpasses.

All of the works follow general guidelines with the common objectives of improving the sustainability and accessibility of the facilities. Outside, the main works consist of the creation of plazas in front of each station, in which the pedestrian is given centre stage. On the façades, the installation or renovation of shelters will highlight the entrance doors. The aim is to improve the integration of the stations into the urban fabric.

In the interior, the general concept is to gain more natural light, for which suspended ceilings are eliminated, increasing the height in the halls and opening up the spaces. The use of sustainable materials, improved air-conditioning efficiency and the installation of LED lighting are all part of the project. Furthermore, all of the spaces are totally accessible, and include technologies such as Wi-Fi, electric vehicle charging areas and personalised information points.

In order to carry out these works, it has been necessary to make the service compatible with the works, which is why personnel have been moved to provisional modules so that they can continue to provide service, and the works have been carefully designed to guarantee passenger comfort at all times.

It was opened in 1866 and initially had a façade topped by a pediment with a skylight, decorative elements widely used at the time. These were later replaced by a rectangular screen façade with 24 openings and a shelter. The housing for railway personnel that began to be built around the station became what is today the neighbourhood of San Fernando. The station has two platforms.

The works reorganise the exterior space, where pedestrian traffic predominates, while inside the passenger building the spaces are being completely remodelled. A large plaza will be created in front of the building as a space for relaxation and enjoyment, integrating it into the neighbourhood, respecting the symmetrical composition and enhancing the building as a scenic backdrop for Avenida Carolina Coronado. On the main façade, the openings in the lower band are strengthened by metal frames in the form of lanterns and there is a lattice of metal slats above. These match existing slats in the central body of the entrance and their orientation changes, giving movement to the arrangement.

A new shelter will be installed outside to cover the entrance. The interior remodelling is centred on the central body, which houses the hall and main entrances, and the eastern body, which contains various auxiliary facilities. A double height hall is created with an open and naturally lit waiting area, enhancing the central character of the space. The underpass and platforms are also being remodelled.

A renovation that respects the ‘skin’ of the building

The existing station dates from 1963 and replaced the original one, inaugurated by King Alfonso XII in 1881, which was demolished. The new building was designed longitudinally, with a symmetrical façade formed by a central body and two lateral bodies with towers at both ends. The main entrance is protected by a large semi-circular shelter. Inside, the waiting room is decorated with a ceramic mural by the artist José Luis Sánchez, dedicated to the conquest of America, and the platform façade has a stained glass window with railway motifs (tracks, turnouts and signals).

The station has two platforms with three operational tracks for passengers and an underpass equipped with lifts.

The integration of the passenger building is achieved renovating the building’s ‘skin’, while respecting its dimensions and construction. It is made up of a lightweight set of horizontal aluminium slats, which will shape the structural bays of the building, giving movement to the façade and breaking up the flatness of the existing building. A new car parking area will be created, which will be detached from the façade of the passenger building, giving the complex space and clean lines.

In the interior spaces intended for travellers (hall, toilets and underpass), the finishes will be renovated and the sunlight and ventilation conditions will be improved. All this is accompanied by new facilities that improve the energy efficiency and comfort of the station.

In the platform area, the shelter will be renovated with new waterproofing, and the underpass between platforms will be resurfaced and given new flooring, as well as new glass railings combined with stainless steel.

Opening up spaces while preserving the building’s identity

The station was opened in 1893, as part of the ‘Ruta de la Plata’ line to Astorga, which is now closed. The passenger building, in a simple and sober style, has a central body of two floors with three linteled openings each, and two side annexes. The roof is a gabled tile roof with the original support structure from 1893, which has been preserved with energy improvements in the insulation. It is located outside the town centre, south of the Jerte River. It has two platforms (one is a service platform), with three tracks and several more that are no longer in use, a freight dock (which will house the cafeteria space) and a building formerly used for railway residences.

The project is mainly focused on development, entrances and buildings. A new station square will be created, with road access and parking adjacent to the station buildings, separate from the development area and façades of the buildings. The cargo building attached to the station, which will house the future cafeteria, will be refurbished, creating a transition space between it and the passenger building, which will be marked with a new shelter, as well as the taxi stand and the main entrance to the station.

In the passenger building, all of the interior spaces are being renovated by extending the hall to the current cafeteria area (which is being moved to the renovated building); new restrooms are being built, and a double height main space is being created by demolishing the first floor, which gives a greater sense of space and light. The works include structural reinforcement, remodelling of the installations and improvement of the building roofs, conserving the support structures of the roofs (riveted wood and steel), to preserve the buildings’ original character. During the construction phase, materials that have added value due to their special historical characteristics, will be reused, such as part of the original tiles, which will be restored and reused for the roofs. In the interior, the furniture and lamps are being updated with more modern designs. 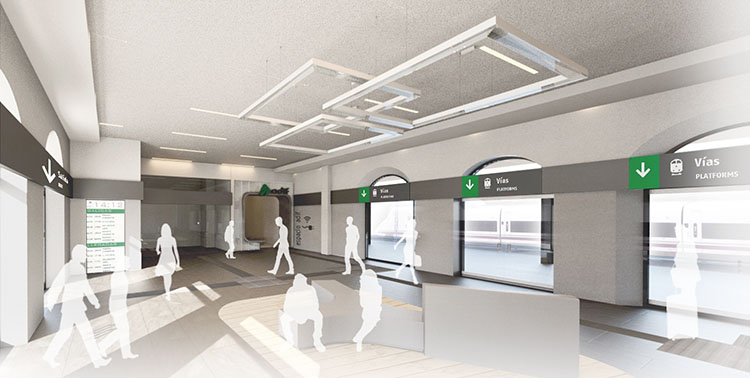 This is the largest station in the Extremadura network in terms of size and passenger traffic, and several lines converge here. It was opened in 1864 and is very close to the historic centre of the city. As with the previous buildings, the passenger building is arranged with a central body with two floors plus side buildings. It has more than 10 tracks and a cargo area.

In the solution designed for the Mérida station, special attention has been given to harmonising the spaces that make up the complex in order to recover the spatial quality that has been lost over time. In terms of development, a new well-defined access plaza space will be created while respecting the retaining wall structures. This will create a homogeneous space in which the pedestrian area is differentiated from the roadway, creating transition spaces that frame the large backdrop of the passenger building’s façade. This same idea was adopted inside, with the hall as an articulating element and a new corporate style. This hall has been designed as a dominant space, incorporating passenger services and the commercial area. The edges of the existing platforms will be adapted to allow passenger access to the new trains. The underpass will also be completely renovated.

Ineco has extensive experience in the construction and renovation of all types of railway stations and in adapting them to high speed.

Since the end of the 1980s and the commissioning of the first Madrid-Seville line in 1992, and as the network has expanded, the company has worked on drafting projects and providing management and technical assistance in different works in more than twenty high-speed stations throughout Spain, such as Atocha and Chamartín in Madrid (1992 and 2009); Santa Justa, in Seville (1992); Sants and La Sagrera, in Barcelona (2008, currently); Lleida (2003); Zaragoza-Delicias or María Zambrano, in Malaga; A Coruña, Santiago and Vigo and another nine stations in the Galician Atlantic Axis (2002-2015); Toledo (2005), Valladolid (2007), etc.

More recently, it has carried out the projects and work management of the high-speed stations of Antequera, Loja and Granada (2019). We also participated in other new construction projects, such as those in Vigo-Guixar (2011), Puente Genil and Antequera-Santa Ana (2007) and Camp de Tarragona (2006). The company is currently working on the adaptation of the stations in Abando, in Bilbao, to the high-speed rail system and on the new intermodal station in Ourense.

The stations of Extremadura, yesterday and today 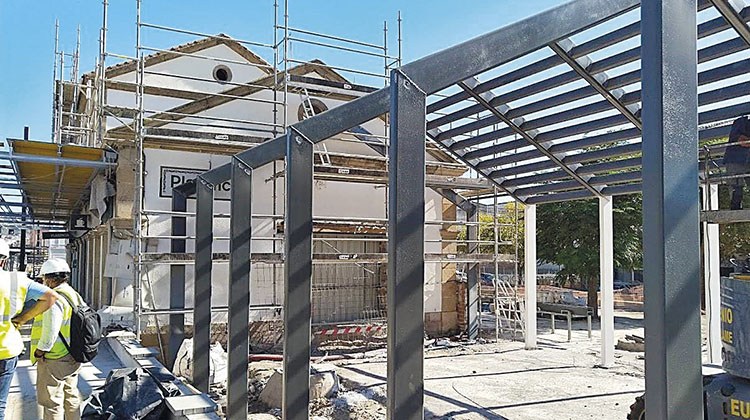 The four original stations were opened between 1864 and 1893, and from an architectural point of view they have the characteristics of the period: simple lines and a functional design typical of 19th century industrial buildings. The regulations at that time established general guidelines for the different existing railway companies to maintain a certain aesthetic continuity in their facilities. It was recommended that stations located in rural areas be simple constructions that fit in with the surroundings, with decorative elements reserved for urban stations. All of them share a common feature: the passenger building as the main construction, plus other annexed facilities, which include locomotive and wagon depots, workshops, warehouses, docks, scales or watering (water supply to steam locomotives), such as the one at Cáceres station. There used to be a house for the Station Manager and sometimes also for the railway staff, as in Mérida and Plasencia, and in some cases these gave rise to entire neighbourhoods, such as San Fernando in Badajoz.

As for the passenger buildings, these are symmetrical constructions, with one or two floors, with the main façade in a central body that is higher and more prominent than the rest, with annexes on both sides, and gabled roofs, as in the case of the Merida station. The walls were usually made of stone, painted white or light colours, and the door and window openings, corners and ledges were framed in ochre, brown or blue-grey.

Works in Plasencia. The works include the restoration and reuse of some original materials, such as wood, rivets and part of the roof tiles. In the picture, the station’s shaded walkway.

Next post A new life in Nairobi for Mallorca’s trains 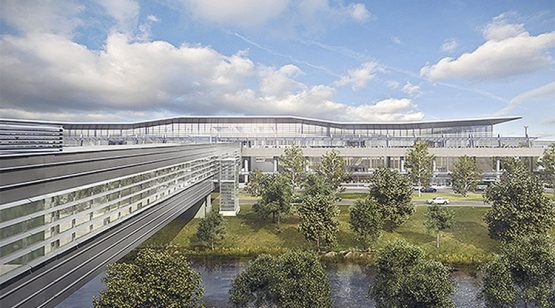 Expansion of works at Newark Airport