The Cartagena de Indias airport has grown and has been renovated to accommodate increased and farther-reaching traffic that requires larger and heavier aircrafts. Ineco has thus taken on the design and coordination of an expansion project that includes strengthening operational safety. 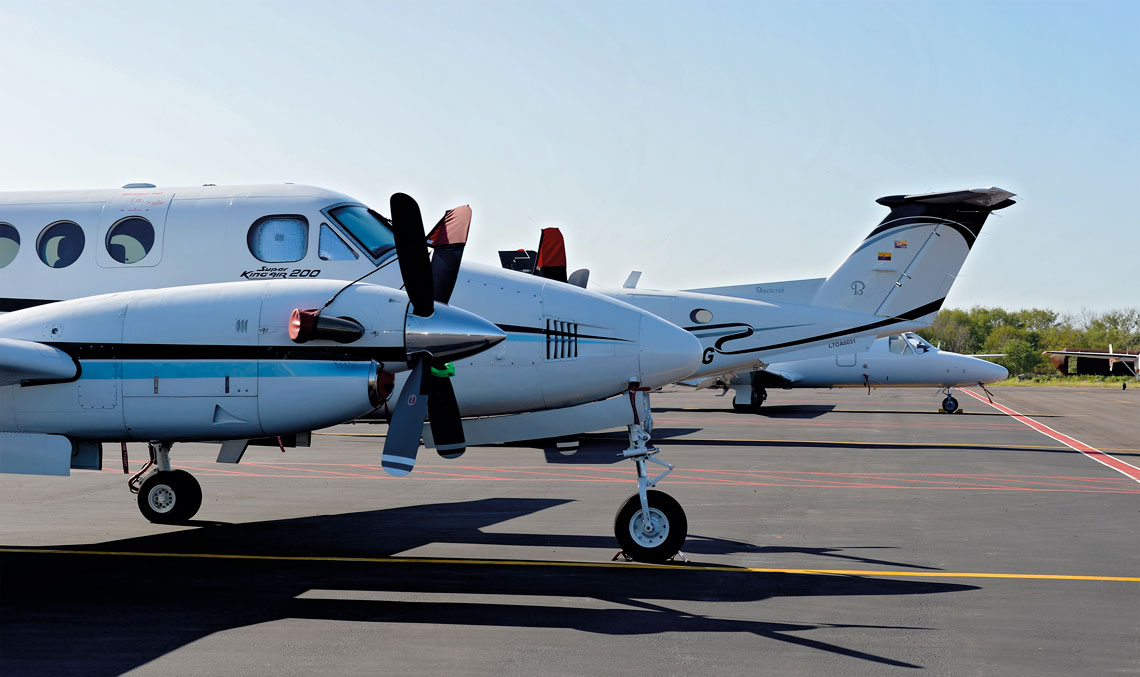 ECO EXPANSION WORK. Five years ago, work began on terminal building renovations as well as on the design and surveillance of work on the runway, aprons, the perimeter road and the new FBO terminal for general aviation services. Here, the ECO (or secondary) apron can be observed.

Four million passengers in 2016: this is the growth forecast for the Rafael Núñez airport in Cartagena de Indias according to SACSA, the concession company. Majority-owned by the Spanish company Aena Internacional, in 2011 SACSA embarked on a project to improve and expand airport facilities, both on ground and in the air, in order to adapt airport capacity to the growing demand. Ineco recently updated the airport’s Master Plan which plans for expansion work until 2020 and has also designed and coordinated construction work (see IT48). Five years ago, work began on passenger terminal building renovations and expansion; work then continued on the design and surveillance of work on the runway, aprons, the perimeter road and the new FBO terminal for general aviation services.

The increase in traffic at the airport is associated with the tourism and industrial activity in this city –located on the coastline of the Caribbean Sea–, whose characteristic, walled historic quarter has been a UNESCO World Heritage Site since 1984. The city stands out as a domestic holiday destination, and although the number of international arrivals has increased, the majority of the city’s air traffic is mainly domestic with connections to the capital, Bogotá, as well as to main cities such as Medellín and Cali. In terms of international flights, top destinations include southern Florida in the United States in addition to Chile, Venezuela and Spain.

In order to drive the tourism sector, the airport operator and local entities such as Corporturismo and the Cartagena City Council are committed to implementing additional long-distance routes both to North America –the city’s main source of outbound tourism– and to Europe –especially to Germany and Spain. Airlines are thus operating larger aircrafts, in turn requiring airports to provide greater capacity as well as increased safety and security –both operational and physical. Since all work must be carried out without interfering with airport operations, Ineco also conducted a study on the different stages of construction in order to minimise the effects as much as possible.

Thus, the construction work that was carried out at Rafael Núñez airport met these requirements: the current terminal building which was expanded from 2011 to 2013 has grown from 10,491 m2 to 19,370 m2. Expansion of the international hall is currently under way. The runway in addition to the main and secondary (or ECO) aprons were repaved between 2013 and 2014 to repair damaged areas and to increase their load bearing capacity. The axis of the turnaround area was modified to make it easier for large aircrafts to move around, and signalling and traffic guidance equipment was also improved.

With regard to the runway, Ineco designed and coordinated the installation of an asphalt mix that had never before been used in Colombia: a discontinuous, BBTM-11 bituminous mixture (with additional fibres) in a 4-cm screed used on 1,740 metres of the runway’s 2,540 total metres. The asphalt not only improves friction conditions on the wearing surface, but it also facilitates drainage and prevents hydroplaning.

On both aprons, a P-401 bituminous hot mixture with a maximum aggregate size of ¾” was used with a BMIII modified asphalt, with varying thicknesses of 5 to 12 centimetres. The landing gear stop-way was also reinforced with 33-cm concrete slabs. Since there are fewer demands with regard to reinforcements on the perimeter road and pedestrian areas, a MDC-2 bituminous hot mixture with B60/70 asphalt was installed.

General aviation on the rise

In addition to the aforementioned interventions which are of vital importance in terms of aircraft safety, the increase in general aviation traffic was kept in mind. Private and military flights represent more than 90% of traffic at this airport, while the remaining percentage is represented by executive flights, school flights, etc. Although general aviation represents less than 1% of the total passengers who use this airport, it corresponds to 30% of airport operations and is expected to grow an average of 3.9% by 2020, totalling some 26,000 passengers and 14,000 operations.

Therefore, construction work was carried out on a new FBO general aviation terminal in 2014 (Fixed Base Operator, a company from the United States in this case), as agreed upon in the draft that had previously been drawn up by Ineco. The new terminal, located in the eastern part, boasts three different areas: airport authority, border control and entry/exit of passengers and baggage; a surveillance area that covers access areas both to and from air and ground, as well as security checkpoints; and a passenger waiting area.

The project included the construction of a new, stand-alone building with an electrical substation, a hydraulic pump room and a drinking water supply in addition to a handling office. Shared with the secondary apron, a new perimeter road was also constructed with direct access from Vía del Mar, the road that connects Cartagena de Indias with Barranquilla.

Rescue and fire fighting services (RFFS) are fundamental elements when it comes to increasing an airport’s capacity. Aeronautics and airline regulations require that the capacity of these services must be rigorously determined by the size (total length and fuselage width) of the aircrafts that normally operate at the airport. Therefore, airports are categorised on a scale of 0 to 10; Rafael Núñez airport falls into category number 7, meaning that this airport would need a minimum of two fire-fighting vehicles, one fire chief and four firefighters.

Nonetheless, the new facilities designed by Ineco provide for the possibility, also foreseen in the regulations, of increasing these resources if, with prior notification, the airport needed to occasionally accommodate aircrafts corresponding to higher categories. For this reason, airport sheds have space for four vehicles: three fire engines and one light-weight commanding vehicle.

Seeing as this airport operates 24 hours a day, the RFFS requires staff to cover three shifts; thus, the new building has the appropriate facilities for said staff to rest in addition to offices, warehouses, technical areas and a car park. In front of this building there will be a paved clear zone that will allow for aircrafts to transition to the military area. Additionally, there will be two water deposits each containing 30,000 litres of water supply for the fire engines, and said fire engines will also be provided with a new access road, thus facilitating their arrival to the runway in under three minutes. Ineco is overseeing the construction work and is also monitoring compliance with the Operational Safety Plan.

Another ongoing project coordinated and monitored by the company includes the enlargement of the runway safety strip; in some areas, this strip does not meet the required distance of 75 metres between the runway axis and the border of the airport. To meet this requirement, ground is being gained from the area of vegetation by reinforcing it with 5-metre long micropiles.

Rafael Núñez airport has seen its traffic volume quadrupled since 2004 and is currently the fourth most important in Colombia behind El Dorado airport in Bogotá, Alfonso Bonilla Aragón airport in Cali –Ineco worked on both of these airports (see IT46 and 48)– and José María Córdova airport in Rionegro. In 1996, the Colombian company Sociedad Aeroportuaria de la Costa S.A. (SACSA) took over management of the airport, and the Spanish company Aena Internacional entered into the picture two years later after acquiring 37.89% of the capital. Aena Internacional is also a partner operator. Aena Internacional participates in the management of 15 airports in three different countries: one in the United Kingdom (Luton), 12 in Mexico (Grupo Aeroportuario del Pacífico) and two in Colombia: one in Cali and one in Cartagena de Indias.
Tags: Aena InternacionalAlfonso Bonilla AragónB60/70BarranquillaBMIIIBogotáCaliCartagena de IndiasChileColombiaECOEl DoradoFBOFixed Base OperatorFloridaGrupo Aeroportuario del PacíficoInecoJosé María CórdovaLutonMaster PlanMDC-2MedellínMexicoOperational Safety PlanP-401Rafael NúñezRionegroSACSASEITMAUNESCOUnited KingdomUnited StatesVenezuelaVía del Mar