The Alhambra is the second most visited monument in Spain, after the Sagrada Familia in Barcelona, and one of the most famous in the world. The historic complex, a World Heritage Site since 1984, receives about 3.5 million visitors a year.

From left to right: the Queen’s Dressing Room, the Comares Tower, the Palace of Charles V, the Cube Tower, the Tower of Homage, the Arms Tower and the Sail Tower.

The Alhambra is a palace and fortress complex built between the 9th and 16th centuries on the top of a steep hill facing the Albaicín quarter of Granada. Boasting some three and a half million visitors a year, it is, after the Antonio Gaudí-designed Sagrada Familia in Barcelona (4.5 million visits a year), the second most visited tourist attraction in Spain and it is also usually included in the list of the most popular in the world.

It consists of a military fortress, a medina quarter, several palaces and gardens and other buildings, mostly built by the sultans during Muslim rule over the Iberian Peninsula after moving their capital to Granada. This period ended with the conquest of the Nasrid Kingdom of Granada, the last territory held by the Muslims, by the Catholic Monarchs in 1492, the same year as the discovery of America by Christopher Columbus.

At this point, the complex passed into the hands of Christian monarchs who added some buildings, such as a Renaissance-style palace commissioned by Emperor Charles V in 1526 and the Church of Santa María, completed in 1618 on the site of an old mosque. After a period of neglect, the arrival of the Romantic era in the 19th century renewed interest in the complex and restoration works began. In 1898, ownership of the Alhambra was transferred to the Spanish state and shortly afterwards it was declared a national heritage site. In the early 20th century, the trust that today manages it was created, placing it under the auspices of the regional government of Andalusia, and, in 1984, it was listed as a Unesco World Heritage Site.

Despite the sprawl of the site, surrounded by two thousand metres of wall and thirty towers, and the variety of buildings of interest from different periods, what has made the Alhambra world famous are its palaces and gardens from the Muslim era and, in particular, the Nasrid dynasty. In spite of the characteristically low quality of construction materials used in Islamic architecture –stone, brick and wood– and the exterior sobriety, the beauty and artistic quality of the interior rooms make it unique. Its gardens and courtyards, adorned with pools, ponds and fountains –such as the famous fountain in the Court of the Lions, perhaps the most recognisable image of the complex– are also responsible for the Alhambra’s uniqueness and universal reputation.

It is located on an elevated site known as Sabika Hill that was initially used as a military post, probably beginning in Roman times. The first palace was built in the mid-13th century by the ruler Muhammad ibn Yusuf ibn Nasr, better known as Ibn al-Ahmar, a name from which the name ‘Alhambra’ is believed to be derived, although other theories suggest that the name means ‘red fortress.’ Though this is not the colour of the buildings, the name is attributed to the optical effect produced by the torch lighting at night during construction. Successive rulers continued to add palaces and rooms, and reinforced the walled military zone, the Alcazaba, which is notable for the Place of Arms, the Sail Tower, the Weapons Tower and the Adarve Gardens. The walled site can be accessed by several gates, the most important of which are the Gate of Arms, the Gate of the Poor Quarter, the Gate of Justice  and the Gate of the Seven Floors.

The citadel (medina), contained houses for nobles and commoners, as well as public baths (hammam), ovens, workshops, underground stores and water tanks. This is the location of the Generalife Gardens and Nasrid Palaces: the Mexuar, the Comares Palace, or Palace of Yusuf I, and the Palace of the Lions, or of Mohammed V. In this area –and not by chance, but to symbolise the triumph of Christianity over Islam–the Palace of Charles V, noted for its unusual circular courtyard, was erected three centuries later. Opposite the palaces is the entry to the Rauda, the royal cemetery, and the Generalife Palace, a house of recreation for the sultans of Granada, famous for its orchards and gardens, and adorned with fountains and irrigation ditches. These gardens include an exceptional construction: the Water Staircase, which features handrails containing channels to carry a stream of water.

The palaces house the rooms and halls used by the sultans to receive foreign dignitaries, celebrate parties or impart justice, all with fabulous decoration covering the walls, arches, pillars and ceilings, and combining calligraphic elements, tiles and muqarnas (pieces of plaster similar to a honeycomb). Of these, some of the most notable are the Hall of the Ambassadors, where the sultan’s throne was located; the Hall of the Abencerrajes, the Hall of the Two Sisters
and the Hall of the Mocárabes, with its spectacular star-shaped vaults. In the Hall of the Kings, the ceilings are adorned with paintings, while in other rooms, such as
the Gilded Room, the ceiling is made of wood.

Other elements of great interest are its overlooks, which offer panoramic views of the city, such as the Queen’s Dressing Room, originating from the Nasrid period but modified during the Renaissance, and the Lindaraja  or Daraxa Viewpoint, which, in addition to its views, stands out for its sumptuous tiling.

Technology and innovation for the Renfe Space

Opening of the AVE high-speed line to Granada 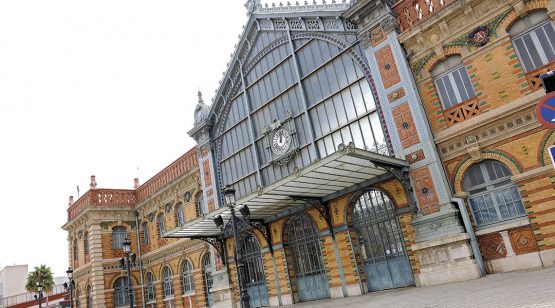