Ineco’s experts develop transport models which simulate and visually represent future flows of passengers and goods, demand and the development of all kinds of traffic at the local, national and international levels. These simulations are valuable, effective tools for the planning of all kinds of transport infrastructures and networks, improving design and optimising investment. 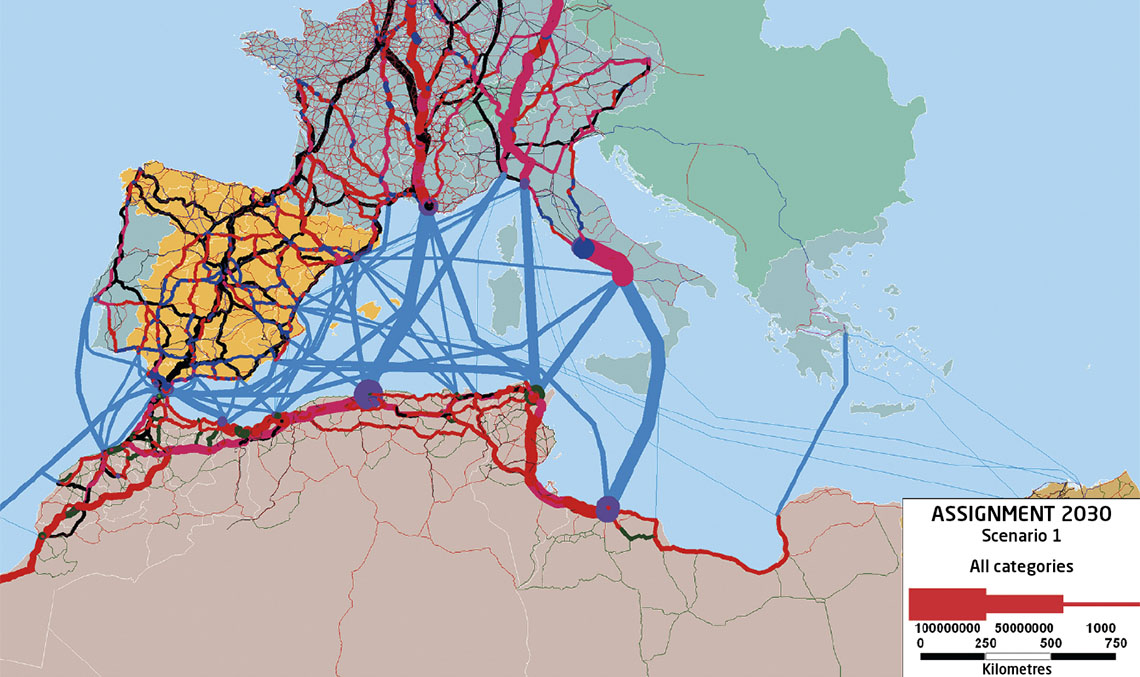 Traffic forecast model for the fixed link through the Strait of Gibraltar created with the TransCAD macro-simulation application.

The Maltese islands, with their extremely high population density (the highest in the EU and the eighth highest in the world), suffer congestion problems and traffic jams due to the extensive use of private passenger cars. The islands have no railway network, however maritime and aviation are important modes of transport both to and from mainland Europe and between the islands. Croatia, on the continent, is almost 180 times larger than Malta by area, but has a far lower population density. The country’s highways, roads and railway lines are currently undergoing a process of renovation and modernisation, as are river transport routes on large inland waterways such as the Danube and the Sava.

There are significant differences between Malta and Croatia in terms of their size and population; however both are currently in the process of planning the future growth of their transport networks, crucial for ensuring the proper working of their economies.

Malta and Croatia commissioned the services of Ineco experts, who prepared their respective National Transport Models as a crucial part of their medium and long-term planning strategies. In Malta, the National Master Plan was also developed

Both countries commissioned the services of Ineco experts, who prepared their respective National Transport Models to support their medium and long-term planning strategies. In Malta, the National Master Plan was also developed.

Using the leading software tools on the market (Aimsun, Legion, Visum, EMME, TransCAD, CUBE, WITNESS, HCS, ArcGIS and Viriato, among others), the transport modelling consultant team of the company develop models which depict reality and enable forecasts to be made, offering a clear, simple representation of complex realities. In this way, governments and transport authorities avail of a highly effective decision-making tool and are also able to compare the possible effects of these decisions in different scenarios and time horizons.

And there’s more. Models and simulations can take many different forms and be developed at different scales, from the effects of a new traffic light at a crossroads, to the demand analysis of a new highway or airport affecting an entire region or a country. They can also serve a range of purposes, from estimating traffic or demand to identifying weaknesses in the design of all kinds of infrastructure and public spaces (for example, spaces causing queues or congestion in stations or which prevent the correct operation of ground handling vehicles on airport runways); they can even be used to study the punctuality of a high-speed railway line.

These examples are taken from some of Ineco’s real assignments from recent years, which also include “tailor-made” models for specific projects.

On the Maltese archipelago, which is made up of five islands (Malta, Gozo, Comino, Cominotto and Filfla, of which only the first three are inhabited), the most widely used form of transport is the private car. The level of car ownership in the country, at 759 vehicles per thousand people, is one of the highest in the European Union, as are the density of its road network, at 762 kilometres per 100 km2, and its population density, at 1,325 people per km2, compared to the European average of 117. And all of this in a territory of just 316 km2.

In such a unique context, the Maltese government established the islands’ need for short, medium and long-term transport planning, which would require thorough preliminary analysis. In 2014, the through transport authority, Transport Malta, the government ran a public tender to carry out the analysis. The winning bidder was the consortium made up of Ineco and the Italian company Systematica with the support of the Maltese firm ADI Associates, tasked with developing the strategic environmental assessment of the proposed measures.

The consortium’s first task was the development of a model, using the specialised CUBE software. The model served as the support for the National Strategy and the Transport Master Plan 2025. All modes of transport (land, maritime and aviation; public and private) were analysed in different scenarios, “do-nothing” and “do-minimum”, within a range of timeframes.  The reference points used were the years 2020 and 2025, with 2050 also being used to provide a long-term view; a comparison was drawn between the effects of various changes to the transport network and services. The model particularly illustrates the effects of the tested measures on congestion, modal split and the external impacts of traffic (accidents, GHGs and pollutant emissions).

The laborious process of creating the model has assisted in accurately quantifying the issues currently affecting the different modes of transport and has provided understanding of their causes. The results are shown in the Transport Master Plan 2025 and the medium and long-term objectives of the National Transport Strategy 2050. The Plan compares four possible scenarios: “do-nothing”, “do-minimum” and the “do-something” scenarios “1” and “2”. The “do-something” interventions consist in measures to restrain the use of private cars and increased support public transport and alternative modes (walking, cycling, etc.), with the first proposing moderate restraints and the second being stricter. The purpose of these scenarios is to assess the combined effect of various measures on Malta’s transport system as a whole.

For example, data analysis reveals that congestion, especially on the five radial roads connecting the capital Valletta with the rest of the island, would be most greatly reduced in “do-something 2” scenario, the most restrictive option.

After joining the European Union in July 2013, Croatia undertook to review and update its long-term transport plan, which dated from 1999. To that end, an international consortium of five companies (PTV Group, leading the consortium, and PNZ, Ineco, Promel and the University of Zagreb) was commissioned to prepare the National Transport Model for the Republic of Croatia, intended to accompany and support the development of the new National Transport Strategy.

The Croatian government, through its Ministry of Maritime Affairs, Transport and Infrastructure, would therefore possess a valuable tool supporting medium and long-term decision-making, for planning connections to the rest of the European Union and domestic transport. Work began in 2014 and the model was developed over the following 24 months. Using 2013 as a base year and with three forecast time horizons (2020, 2030 and 2040), all modes of passenger and freight transport (road, rail, public road transprot, non-motorised transport, maritime, inland waterways and air transport) were analysed under different scenarios with and without implementation of transport strategies, measures and projects in the transport network.

A multi-modal 4-step model with generation, distribution, mode choice and assignmet on the network for passenger and freight traffic was developed. Different approaches for both passenger and freight  traffic were used to better represent and model their particular characteristics. The simulation was fed with data such as the costs and travel times for different modes, socioeconomic data, road network capacity and passenger behaviour information, obtained through a household survey carried out specifically for the project in 2015. The survey revealed, for example, that different parts of the country have different travel behaviour patterns. On account of this, the model incorporated a distinction between the Continental and Adriatic regions.

For freight transport, the complexity and heterogeneity of the sector were taken into account. For this reason, a highly disaggregated approach was used to calculate freight volumes, based on the origin and destination of homogenous commodity types. The main input data were the transport network data, socio-economic data, the national production of each commodity, import and export data and operational and cost parameters, among others; models were developed for both domestic and external freight flows (including import, export and transit).

Once the model was calibrated and validated, the different timeframes of 2020, 2030 and 2040 were simulated in two scenarios: “do-minimum” scenario to point out the bottlenecks and gaps in the transport system, and “do-something” scenario including the measures proposed in the National Transport Strategy. Obtaining results such as traffic flows in the different networks, the volume/capacity, indicators of accessibility to major cities, etc. made it possible to assess, formulate and prioritise the influence of different strategic measures for effective and sustainable traffic development on the country.

Options for every need

Previous Article To the 21st century 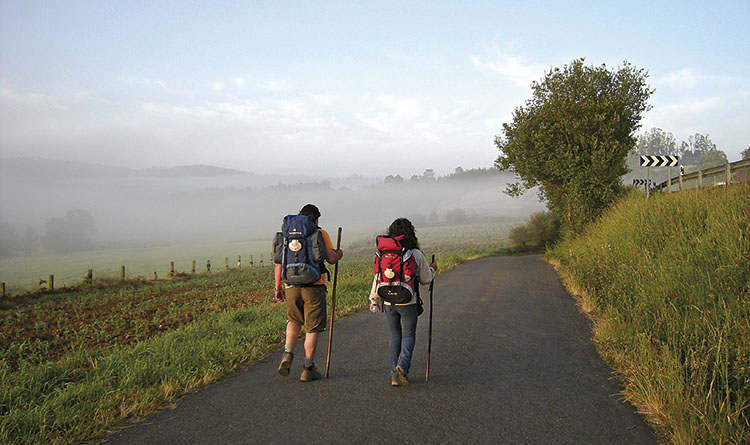 The route of the stars