A versatile modular structure of porticos with a ‘light box’ night effect: this is how we can describe the new halt of the Soto del Henares commuter train station in the Madrid municipality of Torrejón de Ardoz, designed by Ineco. 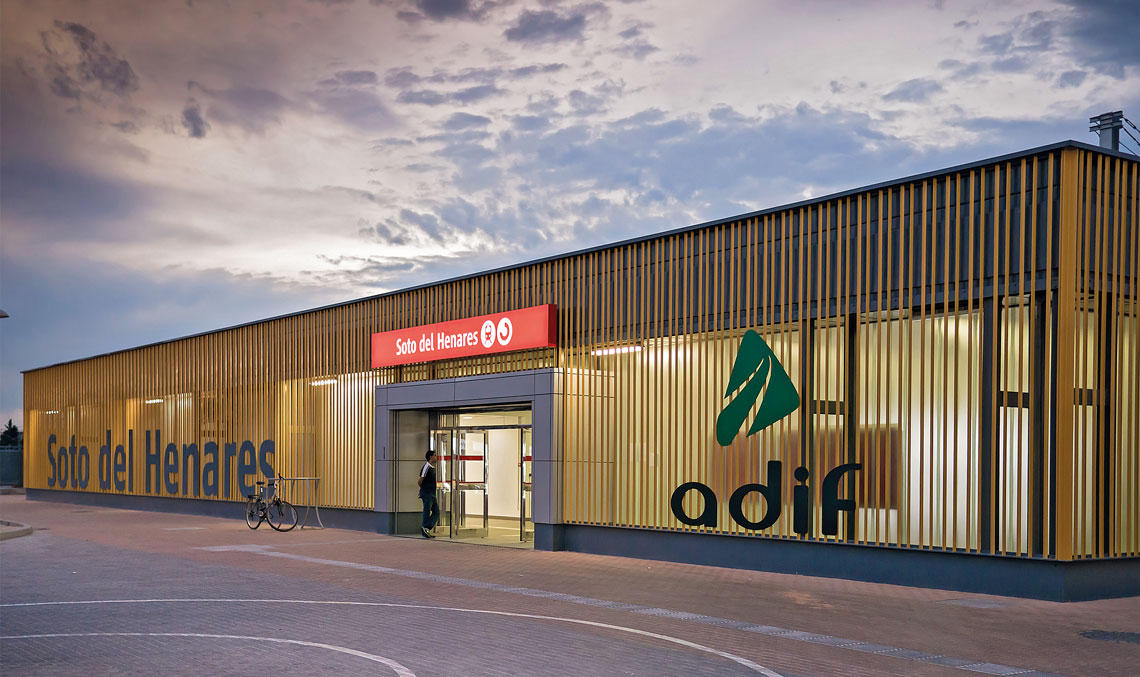 FLEXIBLE MODULES. The modular structure eliminates the need for interior pillars (open plan) and it can be easily adapted to any type of station.

Since last August, more than 20,000 residents of this new construction zone have been able to reach the centre of Madrid in 25 minutes thanks to the new halt, without having to go to the centre of Torrejón de Ardoz. Located in this Madrid municipality of 127,000 inhabitants in the north-east of Madrid, the new station belongs to the C7 commuter line and serves the districts of Soto del Henares, Mancha Amarilla and Zarzuela, a zone near the Hospital of Torrejón and the new Casablanca industrial estate. Ineco has carried out the architectural, structural and installation design, as well as construction management for Adif. It is a modular structure of porticos that eliminates the need for interior pillars (open plan) and can be easily adapted to any type of station. The main building, direction Alcalá de Henares, has a rectangular floor, a foyer with waiting areas, automatic ticket vending machines and six faregates, with the possibility of increasing this number to nine. It also has a space for offices, toilets and utility rooms.

Ineco has carried out the architectural, structural and installation design, as well as construction management for Adif

A modular and extendible design

The halt has two buildings, one for each direction. In the interior, all uses are distributed by independent building volumes (‘building within a building’). The station was designed with a capacity to receive 6,000 passengers a day, although the modular structure facilitates its future expansion.

The geometry of the buildings is based on the golden ratio of a two-metre square, which forms rectangles of 2.8282 x 2m. When doubled they create a module of 5.6564 x 2m, and from the division of this module come all of the internal distances between porticos and different spaces are created.

The main building is laid out as a rectangular prism with two façades, which provides a maintenance area between them. While the “skin” tinges the interior-exterior light (‘light box’ effect), the outer layer generates permeability and allows the design to be changed.

The platform edges are 1.75 metres from the track centres, with a width of 5 metres and a length of 210 metres, with 6 metre slopes at each end. Thanks to the 80 metres of canopy extending from the buildings, passengers are always sheltered when they access the platforms.

Other stations designed by Ineco

Ineco has extensive experience in drawing up architectural designs, as well as in construction management and technical assistance and the preparation of feasibility studies in different types of stations, both overground and underground. 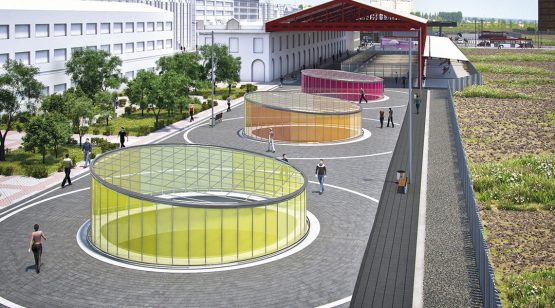 Beneath the heart of León