The cars we drive, the clothes we wear, and the fish we eat reach us by means of a process known as the supply chain, in which efficient and well-planned logistics centres play a fundamental role. Ineco has extensive experience, both in Spain and internationally, in technical and economic feasibility studies of this infrastructure that is vital for the transport of goods. 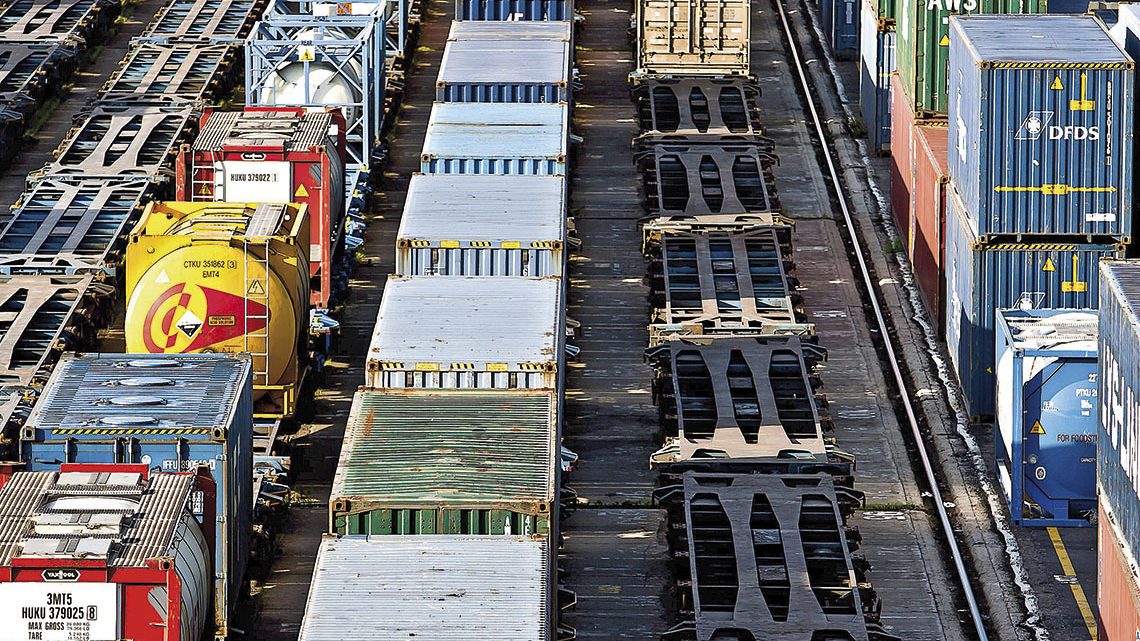 CONTAINERS, THE KEY FOR THE TRANSPORTATION OF GOODS. The containerization of cargo saves space and facilitates modal interchange, mainly from sea to land, thanks to the standard dimensions of the containers. In the photo, the Abroñigal terminal in Madrid. / PHOTO_PABLO NEUSTADT

When you feed your pet, buy a bouquet of fresh flowers, dress a salad or fill up your vehicle, you are at the end of a long chain that could have begun far away. Some products –certainly those such as flowers– will have arrived from their place of origin by air; others, such as salt, animal feed or fuel, may have arrived by sea, road or rail.

But in all cases, in order to satisfy the needs of the end consumer, these products need to travel through the supply chain in the best conditions of safety and quality, and in the shortest time possible. The World Trade Organization emphasizes that logistics is particularly crucial “for the electronics and pharmaceutical sectors, fashion garments and motor vehicles, where time is an important factor.”

The logistics chain covers various economic sectors and all stages of production and distribution, from the supply of raw material to the arrival of the finished product to the end consumer. In this complex network land, sea and air transport infrastructure is especially important, and they must also be interconnected as efficiently as possible. This is the function of transport centres, the hubs of the supply chain: they receive large volumes of goods and are modal interchange points, where the cargo goes from one mode of transport to another, from one phase of the supply chain to another; for example, bulk cargo is packaged, if it is solid, or distributed in trucks or tankers if it is liquid.

Located at road and rail nodes, airports and ports, logistics facilities can provide different services, depending on the type of centre in question: from simple modal interchange to services for the storage, distribution and consolidation of goods (bringing together cargo from different suppliers that has the same destination reduces costs), sanitary control and customs, labelling, packaging, parking, administrative management, electronic traceability, procedures and permits, etc.

In order for the transport chain to flow, and keep logistics costs –which according to the World Trade Organization can account for 20% of the total cost of production in the countries of the OECD– from going through the roof, logistics areas and terminals must have sufficient capacity to meet the demand and be strategically situated in the territory, as well as correctly dimensioned and managed. Since these are large and complex facilities, they require major investment to build them or to expand existing ones.

But this is only the first step: the key is to determine whether they will be profitable in the long term, which requires the rigorous analysis of all foreseeable costs, expenses and revenue. To do this, several factors must be taken into account, such as estimated traffic, land prices and financial formulas, among other things, which will reveal whether the project will be profitable or not. Hence the relevance of this type of study, covering operational, technical, economic and financial aspects, as a basic decision-making tool for project developers, both public and private.

Since the 1990s, Ineco has performed a multitude of feasibility studies, both inside and outside Spain, for all types of transport infrastructure projects related to goods, both new construction and expansions and renovations, including multimodal corridors, business parks, industrial areas and logistics terminals.

The latter include the projects carried out in recent years for the Spanish Ministry of Public Works and several Regional Governments, such as the Basque Country, Andalusia, Asturias and Castilla-La Mancha, planning the construction of several logistics areas in their territories.

Also in Spain, in 2010 Ineco carried out a feasibility study for the new business park of the Foronda Airport (Vitoria) in the Basque Country, which specializes in air freight, and before that, several projects related to the intermodal logistics platform in Zaragoza (PLAZA) that connects air, land and rail transport. Between 2011 and 2012, on behalf of the Ministry of Public Works, the company analysed the rail connections of the Spanish ports, the existing traffic and the improvements that were required.

Overseas, Ineco is currently performing the feasibility study of the future logistics platform ‘Zona ILCO’ in the region of Santo Domingo de los Tsáchilas in Ecuador. Furthermore, in 2012, on behalf of the Ecuadorian Government, it concluded the 2013-2037 Strategic Mobility Plan, analysing all of the country’s transport infrastructure from the intermodal point of view, and proposing, among other possibilities, the construction of new ports and the extension of a landlord management model similar to the one implemented in Spain were included (see IT48).

In 2012, the company carried out an economic and financial study in Colombia to determine the profitability of adapting the Santiago Vila Airport, in the city of Flandes (Tolima), for international air freight (see IT49). In Medellín, in 2010, Ineco concluded a technical, legal and financial study to determine the feasibility of the reopening of the old railway line of Valle de Aburrá and adapting it for the transportation of passengers, goods and solid urban waste.

In Latin America it also carried out a feasibility study of the  Corinto–Monkey Point Multimodal Railway Corridor, Nicaragua (2013), which included the preliminary designs and alignment of two rail port terminals and a multi-modal terminal near the capital, Managua. Other recent international work includes the 2012 project for the Public Authority for Industry (PAI), of Kuwait (see IT48): the company carried out the conceptual design and provided comprehensive advice for the tendering process for the project and work on a new 5,000 m2 industrial area to the southeast of the capital.

E-commerce, the next big logistical challenge

E-commerce is growing at an annual rate of 24% in Spain, and operators such as Correos believe that this is only the beginning: even though internet sales already represent 8.7% of retail trade, 80% of the sector still does not sell on-line. The logistics and transport employer’s organization (UNO) also recognises that this increase has exceeded all expectations. In 2016 the logistics sector saw a 13% increase in contracts, but the challenges it faces are enormous: multiple deliveries within ever tighter deadlines, which have gone from two to three days to two hours in the case of some distributors such as Amazon (the photo shows their centre in San Fernando de Henares, in Madrid) or El Corte Inglés. Logistics companies agree that new distribution strategies are needed, especially in the final phase of delivery, known as the “last mile” such as the use of smaller and more agile distribution vehicles, bicycles or electric vehicles, and new technological developments that optimise distribution routes for multiple orders.

The freight transport sector is of great importance to the economies of countries, because of its capacity to generate employment and wealth. In Spain, according to official data, logistics and transport contribute approximately 5.5% of the Gross Domestic Product (GDP) and employ more than 850,000 people. The Ministry of Public Works, in ‘Spain’s Logistics Strategy’, classifies logistics centres as follows:

keys to the feasibility of a logistics terminal