The Tren Maya, a path to prosperity for southeast Mexico

For the next three years, Ineco and its subsidiary Inecomex, together with Renfe and DB, will be working on the Tren Maya, a passenger and freight railway line that will run through five states and that the federal government wants to promote as a driver of tourism, social inclusion and employment in the southeastern part of the country. 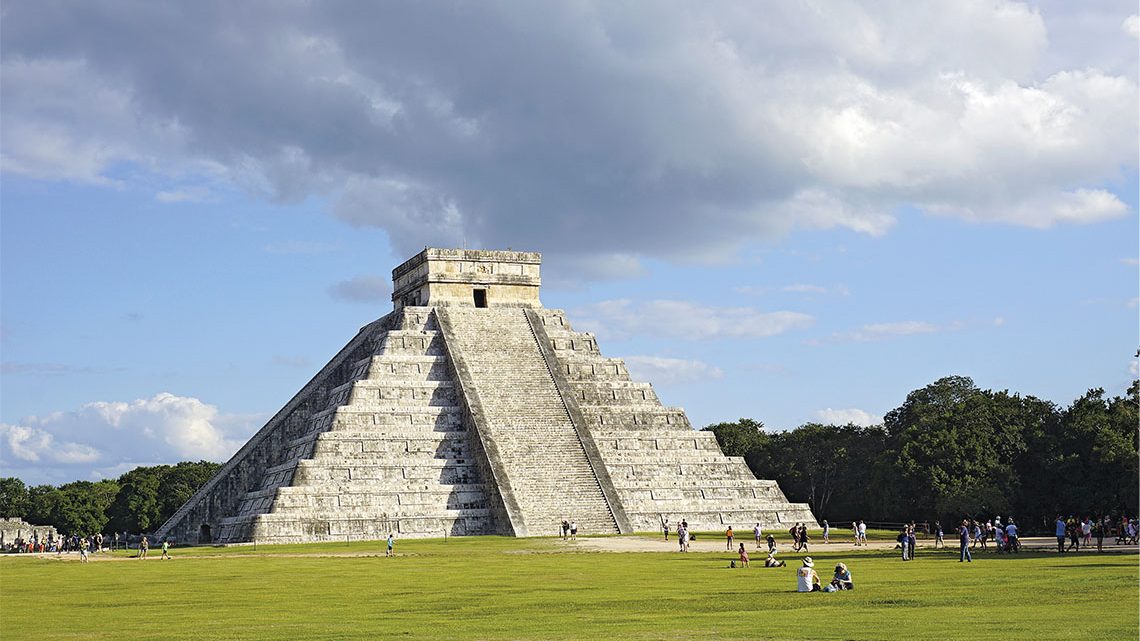 Temple of Kukulkan, the feathered serpent god that inspired the logo for the Tren Maya. The site is located in Chichén Itzá, one of the three great Mayan enclaves along with Tikal and Palenque. / PHOTO_A. VÁSCONES

The Mayan civilisation, which flourished for two thousand years on the Yucatan peninsula and in the area that is today Guatemala and Belize, gives its name to the railway project that the Mexican federal government is promoting in the region, located in the southeastern part of the country, through the National Fund for the Promotion of Tourism, FONATUR.

The Tren Maya will be a conventional passenger and freight line more than 1,500 kilometres long, crossing five states –Chiapas, Tabasco, Campeche, Yucatán and Quintana Roo– with the objectives of boosting tourism and the agricultural sector, as well as creating employment in the region by encouraging social inclusion, promoting and safeguarding local indigenous cultures, and protecting and rehabilitating the Natural Protected Areas of the Yucatán peninsula. For the Mexican federal government, this is a “priority” project, with an important social component, and the first section is expected to be put into service in 2023. The government estimates that the new line will reduce passenger travel times by 46% and increase the speed of freight transport by up to 72% compared to the speed of the existing rail tracks.

In December 2020, FONATUR awarded the consortium –made up of Renfe, Ineco, Inecomex and Germany’s DB Engineering & Consulting– a three-year contract as a ‘shadow operator’, or consultant for the operation and supervision of the Tren Maya project in which it will review the basic engineering of the entire project, defining the requirements for the operation and technical specifications of the rolling stock and railway systems. It will also verify that the maintenance requirements are consistent with the approach of the operations plan.

The consortium will also advise FONATUR throughout the tendering process for the acquisition of rolling stock and railway systems (signalling, communications and control posts) from the preparation of the tender documents, support during the tendering process, supervision of the manufacture, delivery and commissioning of the rolling stock, including workshops and depots, to the start-up and commercial operation of the passenger rail transport operation. 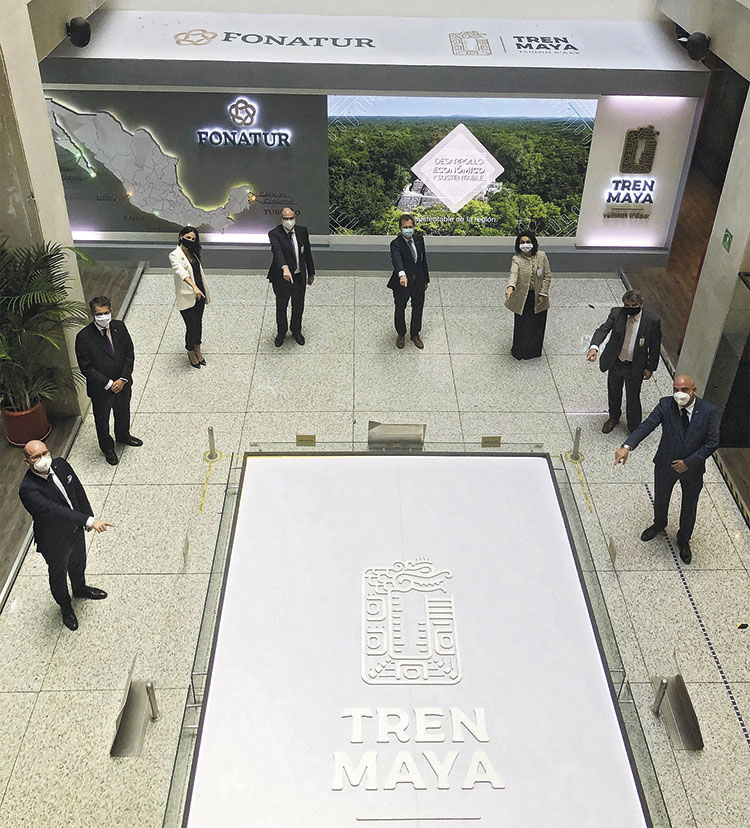 SIGNING OF THE CONTRACT. December 2020, FONATUR awarded the consortium made up of Renfe, Ineco, Inecomex and the German company DB Engineering & Consulting, a three-year contract as adviser for the operation and supervision of the project. / PHOTO_INECO

A mixed line with international gauge

The Tren Maya will be a conventional mixed-use line linking the region’s main production and tourist centres. It is designed for a top speed of 160 km/h for passenger traffic –long-haul, regular (medium distance) and tourism– and 100 km/h for freight. Virtually the entire route will be built on ballast with international gauge (1,435 mm).

Eighteen stations and 12 stops have initially been planned, although the federal government has pointed out that “as the train matures and demand conditions increase, additional stations may be added”. Multimodal charging stations are also planned for Campeche, Merida, Cancun and Chetumal.

A large part of the route will use existing rights of way, and level crossings will be avoided. In order to ensure accessibility to the territory, the construction of 24 viaducts, more than 200 vehicle crossings and some twenty pedestrian walkways is planned, as well as more than 2,700 wildlife crossings.

The route will provide access from the general corridor to places of interest such as Chichen Itzá and Chetumal. An underground branch line has been planned in Mérida under the existing railway line, thus eliminating the barrier effect generated by the existing route. 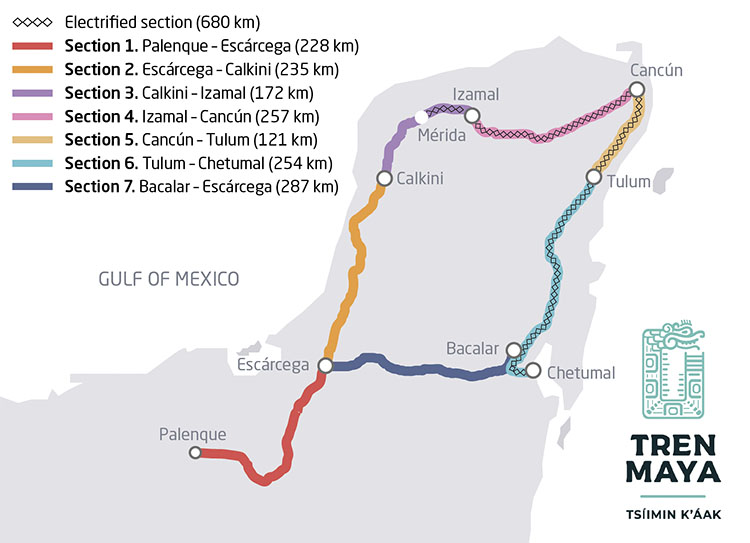 General layout of the route.

In terms of track superstructure, the line will be equipped with the most advanced railway systems: ATP (Automatic Train Protection) and ATC (Automatic Train Control). The railway communication systems will be based on wireless technologies, which will allow reliable and continuous communication between the different parties involved in railway operation and between these parties and the public civil protection services. Railway operation control will have a Command and Control Centre located in the city of Mérida and several area control centres.

The Tren Maya will have a series of safety systems to detect anomalous events, which will be connected to the Command and Control Centre. The main systems include detectors for hot axle box and hot wheels (HABD/HWD), objects fall, dragging equipment and derailed axles, gauge excess
and broken rails.

Stations and technical buildings will be equipped with a high-performance network of fibre optic connections, radio communications, radio infrastructure approximately every 15 kilometres of the route and connections to emergency services. Subsystems for video surveillance, telephony/intercom, sound and voice, remote indicators, access control and ticketing are also planned.

2021 is an important year for Ineco, as it marks 10 since the opening of the subsidiary Inecomex. In its more than 20 years of experience in Mexico, the company has developed more than 40 projects

The passenger rolling stock will be designed according to the three types of service to be provided: long distance, regular and tourism. The trains will be modular, allowing multiple sets of trains to be coupled together in order to increase capacity as required. The coaches will have two doors each and a passageway between them; they will also be accessible for passengers with reduced mobility. In terms of performance, they will have a maximum speed of 160 km/h, operate in both directions and have a seating capacity of up to 450, which can be adjusted to meet demand. The project is planned for the use of diesel and diesel-electric rolling stock.

The freight rolling stock will use diesel traction with an installed capacity for a maximum speed of 100 km/h and a maximum axle weight of 32.5 tonnes. The maximum length will be 1,500 metres and, when running, sidings will be provided to allow trains to pass each other in the event of a breakdown, emergency or overtaking.

A project with considerable impact

According to the federal government, the new railway line will improve connectivity and tourism development in an area where “economic activities are concentrated in a few distant urban centres, with a population of 7.3 million people living in poverty”, which is why “one of the main objectives of the Tren Maya is to boost the region’s economy” and achieve a “multiplier effect” from the investment.

With regard to the protection of the natural environment and the cultural and archaeological heritage, the government stresses that the project strictly complies with existing legislation, as well as considering the scale of the human and material resources for this purpose. In addition, a public consultation involving more than 10,000 people from indigenous communities in the five states through which the route will pass was held at the end of 2019, resulting in a number of agreements.

The Tren Maya will be a conventional passenger and freight line more than 1,500 kilometres long, crossing five states. Its objectives include boosting tourism and the agricultural sector, as well as creating employment in the region by encouraging social inclusion, promoting and safeguarding local indigenous cultures, and protecting and rehabilitating the Natural Protected Areas of the Yucatán peninsula.

The basic design criteria are:

the 10th anniversary of THE SUBSIDIARY Inecomex

By Salomé Fernández, director of Inecomex and of Ineco’s North America Account

2021 is a significant year for Ineco, as it marks 10 years since the opening of the Mexican subsidiary Inecomex. A country in which Ineco has more than 20 years of experience, and more than 40 projects behind it. The route reached its first major milestone in 2006, with the Buenavista-Cuautitlán commuter line for Ferrocarriles Suburbanos de Ciudad de México, a project that allowed the company to open a delegation in the country. Ineco participated in the preparation of the tender for the consortium led by Construcciones y Auxiliar de Ferrocarriles (CAF) and carried out the coordination, design, construction supervision and commissioning of the line. In two years, 27 kilometres of line were renovated and new sections of track, six stations and interchanges were built, in addition to the installation of a new electrification, signalling and communications system.

In the airport sector, Ineco began its work in Mexico with Aena Internacional, providing support in the first studies carried out for Grupo Aeroportuario del Pacífico (GAP), starting from 2000 with the drafting of the Master Development Programmes for its 12 airports. Since then, Ineco and Inecomex have continued to work on the periodic updates of the Programmes, most recently in 2019 for the period 2020-2034 (see IT 68).

Ineco participated in the project management of the extension works of line 12 of the Mexico City Metro since 2016 (see IT 66); and since 2011, it has been managing and supervising the management, extension and maintenance works of the 148 kilometre Guadalajara Colima motorway (see IT 46 y 52), including, due to its technical complexity, the project management of the doubling of the carriageway of the ‘mountain section’ (see IT 70), which is currently underway. This 14-year contract led to the opening of the company’s second subsidiary, Inecomex, which is now celebrating its 10th anniversary. The company currently has a team of more than 50 people and offices in Mexico City, Guadalajara and Ciudad Guzmán.

Next post A forest to shrink the carbon footprint 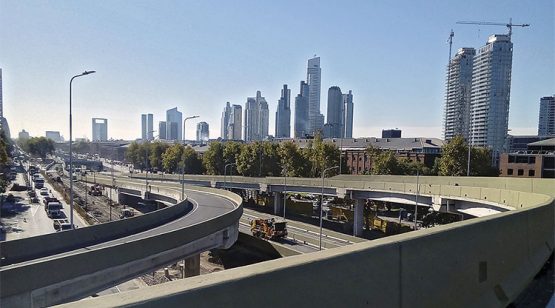